Earlier this week in Boulder, Colo., 11 Republican presidential hopefuls took their third shot on CNBC’s national stage of 13 million viewers to expand their support base with new campaign messages and tactics.

As we head deeper into election season, brand advertisers also have a high-stakes, high-reward opportunity to set themselves apart from their competitors by delivering relevant, timely messages to a captivated political audience. As we saw from the last presidential election season, brands such as JetBlue, Pizza Hut and PBS jumped in with clever and entertaining campaigns that leveraged current events and effectively connected with consumers … but not without risk. 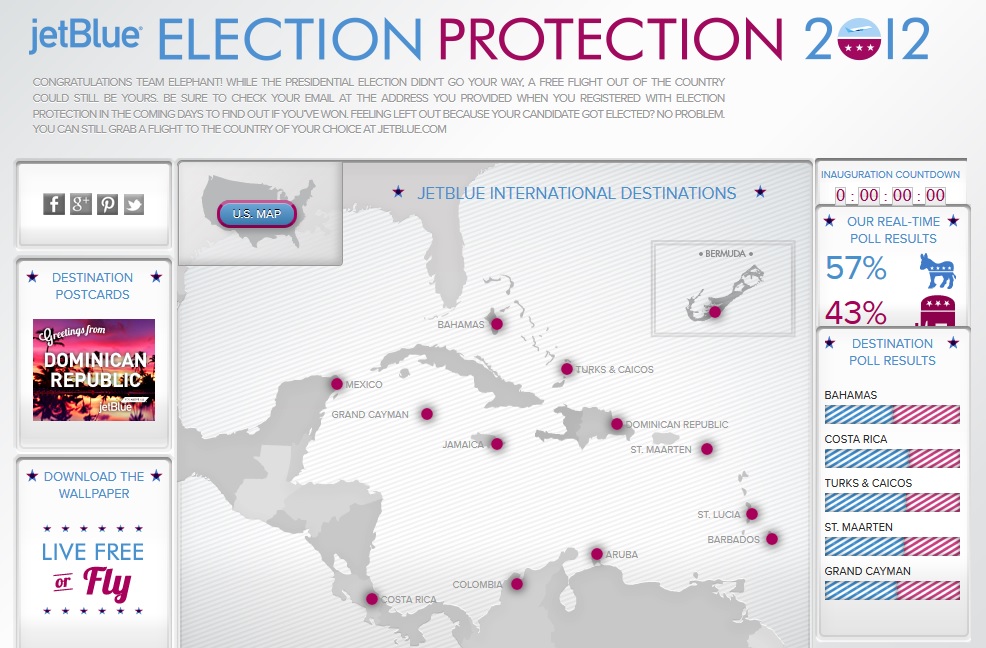 Above: JetBlue’s 2012 “Election Protection” campaign offered customers the chance to leave the country if their candidate lost the election.

With political ad spend projected to reach $11.4 billion this season, brands will have to work hard to rise above the noise. Here are some ways to stay focused and build a story that will further expand your base of brand enthusiasts and loyalists.

For this season’s remaining 19 candidates, the presidential campaign represents a grueling, intricate labyrinth of paid and unpaid channels to engage various constituencies across 50 states. The venues range from local town halls in Fort Dodge, Iowa, and rallies in Mobile, Alabama, to national broadcast appearances on The Late Show or Meet the Press. And at any given moment, a candidate’s statement — a triumphant cry on income equality or a hiccup on religious beliefs — can go viral through social media and quickly gain national attention.

To identify the best opportunities for weighing in, brands must be equally adept at navigating the political arena and savvy about the nuanced dynamics and merits of various paid and unpaid media channels. For example, Fox News’ telecast of the first Republican debate in August drew 23.9 million viewers (16% of homes with TV sets), making it the highest-rated presidential primary debate ever and among the most-viewed events in cable TV history. In contrast, digital media represents a powerful channel to reach millennials, an increasingly powerful constituency for candidates. As a result, each candidate has turned to social media channels (including relative political newcomers Instagram and Snaphat) to engage millennials on very specific issues such as student loans and healthcare.

Instead of taking a reactive approach (i.e., scrambling to come up with a clever idea once a milestone moment has gone viral), brands should take a proactive approach and organize ahead of time. To start, you should understand which candidates your brand is better positioned to play off of (positively or negatively). Next, you should game out topical responses and be ready for a candidate to use a trigger phrase or question at the next debate. Once you have established a clear approval chain, be ready to go when an opportune moment hits. If you can’t be timely, don’t bother.

Get Creative and Don’t Be Afraid to Poke Fun 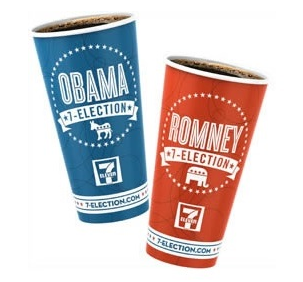 What does 7-Eleven have to do with the presidential election season? Normally, nothing. But in 2012, the company held its third ‘7-Election’ campaign, where customers could show support for either Barack Obama or Mitt Romney by choosing a red or blue cup. By keeping tally and posting state-by-state results of cup choices on its site, 7-Eleven successfully “polled” 6 million consumers and garnered major media attention.

In another example, when Mitt Romney claimed that, despite his love for Big Bird, he would cut PBS funding if elected, PBS quickly purchased promoted tweets related to “Big Bird” searches on Twitter. As a result, it was able to drive traffic to its site and educate consumers about the value of PBS.

These campaigns illustrate how brands can develop creative campaigns that engage audiences by taking a lighthearted, entertaining approach. Again, if you can plug into a timely moment or trend, consumers will appreciate the context and relevance and respond with engagement.

Don’t Overdo it, and Don’t Be Tone Deaf

While the presidential election season presents significant opportunities to participate in a politically driven conversation, brands need to be strategic and selective about when to chime in. Brand-driven geo-political campaigns don’t always represent a good idea, as clothing retailer Kenneth Cole now knows.

As you evaluate marketing opportunities, be sure to constantly question the potential merits of an investment and allocation of resources. Ask: Does this align with our brand? Does this campaign further our brands’ broader marketing goals and objectives? What KPIs will we track to evaluate effectiveness? Why is this important?

You should also remain acutely aware of the social conventions of the time, and constantly assess the risk versus rewards of pushing the marketing envelope. It’s one thing to make light of the ridiculousness of politics with benign memes; it’s another to poke at hot button issues that remain sensitive in today’s social fabric.

The primaries present a perfect time for brands to test and refine messaging with a smaller set of tuned-in voters. If you take advantage of these opportunities now, you will be able to deliver relevant, on-message campaigns in the general election. By asking these kinds of questions ahead of time and staying focused, you will be able to rise above a crowded advertising landscape and continue blazing trails with engaging brand messages.

Michael Horn is SVP and Chief Analytics Officer at Resonate.