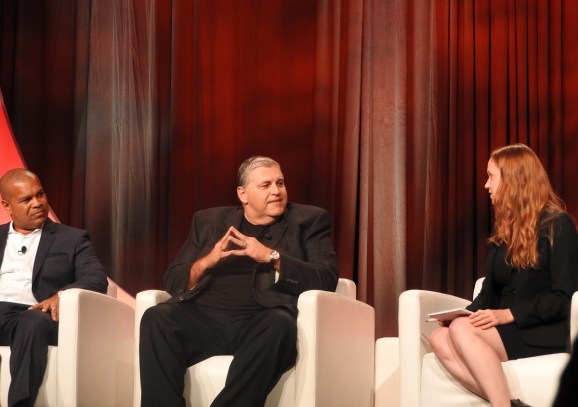 SAN DIEGO — Virtustream‘s founders Rodney Rogers and Kevin Reid made the stressful decision to turn down an acquisition deal with SAP, take an investment from the corporate giant, and bet on going it alone.

It turned out to be the right move, as Virtustream was acquired this year for three times its 2013 value. EMC bought Virtustream, a six-year-old public cloud and cloud software company, for $1.2 billion in May. Rogers and Reid have had a very wild ride, and their story, told onstage today at the Intel Capital Global Summit in San Diego, offers a lot of lessons for entrepreneurs who would also like to create a “unicorn,” or startup valued at more than $1 billion.

Credit Suisse has counted 109 unicorns among the world’s startups. They have a collective value of $453 billion, and have raised a total of $48 billion. That has led to a lot of concern about too much hype in tech investments, with a bubble forming that is sure to burst. But the unicorns have prospered, in part, because the public markets are so volatile.

So far this year, only 23 companies have gone public, Credit Suisse said. Last year, it was 61. And for the past two quarters, those that have gone public have seen their share prices fall. Virtustream was contemplating going public and even actively preparing for it, but the founders said that ditching that plan was a wise decision.

Rogers and Reid spoke in a fireside chat moderated by Thomson Reuters reporter Heather Somerville. They were guests of Intel Capital in part because Intel was one of their early investors.

Based in Bethesda, Maryland, Virtustream was the founders’ third startup together. Rogers and Reid had the idea to create a cloud company that would provide a public infrastructure for other startups to use. They were hopping on the massive movement of enterprises taking advantage of cloud computing, or Internet-connected data centers, that could provide all of the information technology services companies once kept in-house.

The problem was, Rogers and Reid were outside of the bubble-thinking of Silicon Valley, and feared they were late to the market. Their timing was terrible. On one September day in 2008, they made their first pitch to investors who had bet on their previous company. It happened to be one of the worst days of the financial meltdown that triggered the biggest economic mess since the Great Depression. With the Dow Jones Industrial Average down 770 points, Reid said that the investors “didn’t notice we were in the room.”

The partners formally incorporated the company in January 2009, and managed to raise funding. They also put some of their own money into the business of running intensive, mission-critical apps in the cloud.

They finally got a big stamp of approval when Intel Capital put money into the company in its second round of funding. That helped them grow, even as they were busy coding. Rogers said they didn’t mind that they were not considered a sexy company at the time. They continued with their mission of disrupting major tech companies, and kept their courage up to stay the course. In addition to raising venture capital, they also took on debt.

Reid said, “We were based in Bethesda, Maryland, which people call Silicon Valley East.”

Rogers quipped, “Which it isn’t.”

Reid and Rogers said that their pitch to both investors and customers ultimately worked because it was a sound business with real customers and a sensible business plan.

“Investors are looking for value,” Rogers said. “If you are looking to create enterprise value, look beyond the surface. If potential investors are focused on short-term results, that can be very distracting.”

In 2013, they got into deep negotiations with SAP for a potential acquisition. But both parties walked away from that deal, and they instead turned the discussions into an investment. Virtustream raised $40 million, which turned out to be good for both parties. Rogers said that SAP saw a three-fold return on its investment. Still, back in 2013, it was hard to walk away from an acquisition offer.

“In 2013, we were still really early,” Reid said. “A lot of this has to do with timing. We were just four years old. But you have to look at the momentum of the company and the industry.”

As for the current environment for unicorns, Reid said, “The bar keeps getting higher. Everyone wants to raise more money than the others.”

But Rogers said it takes a lot of skill to keep spending enough money to generate value “without incinerating your balance sheet.” He added, “You have to mind that balance every day. Burning cash for the sake of it doesn’t make sense.”