Chinese drone maker Ehang just launched the Ghost 2.0, a consumer drone that comes with virtual reality goggles, allowing its user to experience flight through the drone’s 4K camera. While this is still unusual, Ehang is not the first drone company to offer such a feature.

Full pricing details don’t appear to have been announced yet, though a basic model without VR goggles or camera is listed at $599 on the company’s website (available at $499 for the first 100 orders, due to ship in six weeks).

Expect the goggle and camera version to cost substantially more — probably somewhere around $1,500, though that’s just a guess at this point. The company is also offering a “trade-up program” for owners of the original Ghost drone that launched last year, though again, specifics are not yet available. 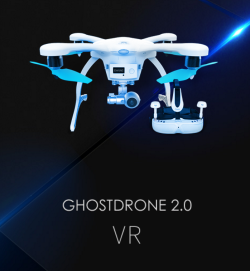 The drone is piloted through the Ehang Play app, available on both Android and iOS, which takes advantage of a smartphone or tablet’s gyroscope to enable tilt control, among other features — “Just tilt your hand and your Ghost Drone will follow the gesture,” Ehang said. (This feature is new to the Ghost 2.0.)

In a nifty addition, the VR goggles come with a similar mechanism — head-tracking — which allows the user to simply look up or down in order to tilt the drone.

“See through the eyes of your Ghost Drone. Just put on the goggles and experience the excitement of first-person-view flight. Aerial footage live streams to your goggle with zero latency for a real-time flying experience. Front camera allows you to switch between live aerial view and front view,” the company says.

“That’s because you can use your intuition instead of learning to use a complicated RC transmitter,” he said. “2.0 also makes it possible for one person to act as both pilot and cameraman — a cutting-edge move for the market.”

Ehang raised a $10 million Series A round in December last year, and a $42 million Series B in August this year. It boasts former executives from Microsoft and Lenovo in key roles — talent it will need as it takes on fellow Chinese drone maker Yuneec, which raised $60 million from Intel in August.

Pre-orders for the Ghost Drone 2.0 are now open, and you can check out official launch videos below: