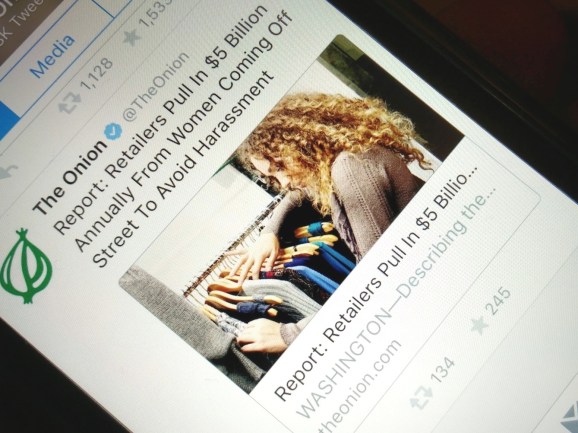 Twitter may be useful for many things — breaking news, customer service, networking, posting selfies — but it has also emerged as the perfect medium for delivering satirical one-liners.

Anyone who follows perennially popular spoof news outlet the Onion on Twitter will be familiar with the irresistibly cheeky 140-character-or-less headlines that make you want to read more.

Man Arriving Late Forced To Use Excuse He Was Saving For Leaving Early https://t.co/siwLvECfzt pic.twitter.com/nwkL4Lvpwf

Talking at Dublin Web Summit last week, Mike McAvoy, chief executive officer of the Onion; and David Schneider, writer, actor, and cofounder of humor-centric content company That Lot, were on hand to talk about satire in the digital age. And specifically, about how Twitter’s intrinsic restrictions are perfect for pithy put-downs and hilarious one-liners.

“Each of the staff writers come up with a bunch of headlines or jokes,” said McAvoy, when asked how the Onion develops its stories. “And as part of the writing process every week, there’s probably 1,500 headlines that the writers select from. Writers read the joke aloud in the room, and if a joke or headline gets votes, it moves to the next round. Eventually, those 1,500 headlines are whittled down to around 25 a week that we write about.”

Once the headlines / jokes have been selected, “an intense writing process” ensues which leads to several rounds of drafts, editing, photoshopping, and then publication. But it’s interesting to note that the Onion’s joke-writing process is almost custom-built for Twitter — it all starts with the headline or series of one-liners around which the stories are subsequently written. 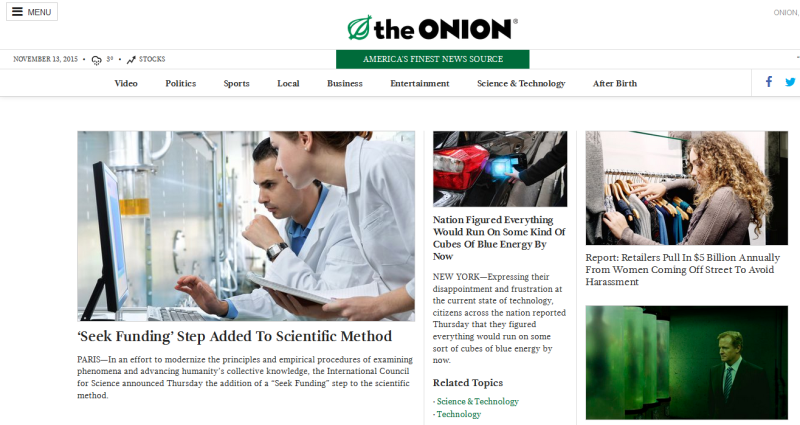 The Onion was early to embrace the Web, first going online in 1996. Its print edition was shuttered in 2013, and today it feels like a native Internet company, rather than a legacy media brand. But the publication actually pre-dates the Web by a few years. Conversely, the Onion’s UK equivalent, Private Eye, hasn’t aligned itself quite as much with the online fraternity, instead pushing for sales of its print incarnation.

A quick peek at the Onion’s beginnings reveals why the publication was a natural for the Web. Launched out of the University of Wisconsin in 1988, it began as a free weekly newspaper that ran advertisements and gave away coupons. In other words, it wasn’t a magazine you’d pay for on newsstands — unlike Private Eye which first went to market way back in 1961. The transition for the Onion was much smoother.

“When we went online in 1996, we didn’t have a conflict of ‘how do you get people to pay for content online, when they’re used to paying for print’ — It was always something that was free,” said McAvoy. “And it had to embrace advertising. We had an advantage in that we were naturally employing the Web economics of being able to create content by funding it through advertising and didn’t have to worry about how we keep our subscription revenue.”

Making people laugh through Twitter and the wider Web is one thing, but monetizing is something else. Instinctively, comedy audiences don’t like being sold to — through advertising or any other means — but McAvoy said that monetizing is not a challenge unique to satire.

“It’s a challenge for all content creators, really,” he said. “Premium content — content that takes a lot of care, and energy, and talented people to create — you need to find a way to finance it. For us, it’s always been through advertising. Yet, the Onion also has this anti-establishment side to it. So it’s always been this delicate balance of how you become great at getting advertising to support what you want to do. But also staying true to what we do. We’ve done a really smart job with our sponsored content; we make sure advertisers are ‘part’ of a joke, and we make sure we’re making fun with the brand in front of our audience.”

David Schneider, who has written for and starred in a wide range of comedy shows in the UK over the past two decades, is now creative director at a social content company that works with brands to help them engage with their customers using humor. This approach works well for companies that want to distance themselves from the competition by not tweeting the usual bland comments, but instead gaining followers who enjoy the banter.

Popular BBC TV show Have I got News for You has its own Twitter feed, which Schneider’s company manages, and which loosely follows the format of the show. The firm also works with Facebook posts, creates videos, and generates viral content for other brands.

But satire, by its very nature, can be difficult to align with corporate brands, given that it can be controversial, self-deprecating, and divisive.

“The right brand understands that in order to reach people who are under 15, or under 35, you need to do something different to traditional advertising,” said Schneider. “So the best way to create something authentic is through comedy. If you take yourself too seriously, the younger audience doesn’t give you any credit. So we work closely with brands, get them to be “in” on the joke, and not take themselves too seriously. If you are able to be self-aware and be part of it, your ad campaign will be successful.”

When a company is selling a product, everybody knows that it is doing so to make money. Yet most brands hide behind the “benefits” it will bring the customer, not its shareholders. But this approach may have limited impact among certain demographics, which is why allowing the brand to be part of a joke can work.

The approach isn’t unique to online advertising, though, as this beverage brand showed with billboard ads clearly intended to capture the imaginations of the more cynical generations.

One interesting case study for how humor and satire can effectively be used on Twitter is that of Arena Flowers, a UK-based flower-delivery business similar to 1-800 Flowers.

Rather than using its Twitter account to combat angry customers or dispatch dull corporate messages, the company just tweets out jokes. And not on-topic jokes about flowers, either, just jokes. Arena Flowers is a hugely successful online business, so this approach seems to be working.

Some owls can turn their heads 360 degrees. Others use a bayonet fitting. Always check the fitting & wattage when replacing your owl's head.

They say the UK and the US are two nations divided by a common language. I've always thought that big load of ocean made a bigger impact.

As with most online platforms, Twitter has evolved. It used to be the case that you had to click on a link to view an image, and this was used by comedians and satirists to their advantage. “Click to reveal the punchline,” was the general idea.

“It was a great joke mechanism,” said Schneider. “Because you could set up the picture and they get the laugh when they click on it. But we had to adapt, because Twitter now serves the picture first.”

It has been interesting to see how comedy, in general, has evolved alongside Twitter. Many have embraced Vine to post short-form videos, while even something as “boring” as the recently launched polls can be leveraged for comedy. The excellent Pundamentalism has been cracking-wise on Twitter for a long time, with humorous word-play such as:

Apparently, California has the highest rate of Adultery and Depression. It's a sad State of affairs.

But it didn’t take long for the funnyman to find a way to use Twitter’s new polling tool to generate giggles.

With the rise of viral news platforms such as Upworthy and BuzzFeed in recent years, the Onion has also had to evolve. Last year, it launched ClickHole, which is a fantastic, satirical prod at clickbait websites.

“ClickHole has been fantastic — it’s a parody of everything viral and vapid,” said McAvoy. “What ClickHole does so well is it makes fun of the two different facets of clickbait — one is the publishers quest to get clicks. So they’re doing anything to try to engage you and get you to see an ad. But also the user-side, so even if you’re going to click on something that’s terrible and won’t be fulfilling, you can’t help but click.”

While Twitter isn’t ephemeral in the same way as Snapchat is, it’s certainly transient — information doesn’t tend to hang around for long. Blink, and you could miss a 132-character nugget. So doesn’t this mean satirists struggle to be remembered?

“I can still remember reading a great joke (on Twitter) and thinking ‘that’s fantastic’,” said Schneider. “I don’t think it is that transient. There’s certain things that the Onion have posted, and you just remember them.”

Naturally, McAvoy agrees — Twitter is great for comedy. “Since we begin with the headline, everything is really made for Twitter. For us, it’s the perfect way for making sure your point is super succinct. If you cant’ have a headline be understood and be funny (in a tweet), well, that really is the litmus test of what works.”