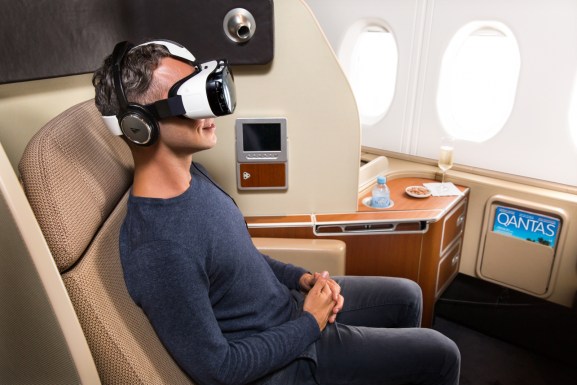 The tech business loves virtual reality, and a wide range of companies are about to lovebomb consumers with some fancy new VR toys.

Samsung and Oculus will be first with Gear VR, a $99 product designed to transform compatible Samsung phones into VR headsets. Then there will be the Oculus Rift, Vive, an HTC/Valve product designed to work with PCs, and Sony’s recently renamed PlayStation VR.

That’s all well and good, but what will stop VR from becoming the next 3D TV, a big band in the tech sector that was ultimately shunned by consumers? Until recently, VR has been a fringe obsession for the hacker/maker crowd, and – for the experiential/stunt crew – it’s become a parlor trick whipped out to surprise and delight. The presence of Sony’s PlayStation in the mix creates a general assumption that VR is for gaming, but Oculus (and owner Facebook) are keen to promote non-gaming applications such as commerce, entertainment content, and social functionality.

While their ambition is to create a new way of consuming content that feels as natural and organic as watching TV, VR has a long way to go before this happens. Like many new technologies, VR is battling through the classic hype cycle of consumer acceptance. It may have survived the “trough of disillusionment,” but the “plateau of productivity” is still on the horizon.

Our research indicates three key areas that VR manufacturers must address if they want VR to become a true media channel: trial, behavior, and content.

We surveyed 2,500 self-professed gamers, the group most likely to be early adopters of VR. Just 54 percent expressed any interest in VR, while 22 percent plan to buy a virtual reality head-mounted display (VR HMD). Beyond the cost issue – our survey showed over 50 percent of the people think the rumored cost of $400 is just too high – gamers have been burned by early forms of VR, and those early experiences have left many highly skeptical.

The challenge is that you can only really understand VR by experiencing it, and the number of people who have actually tried VR compared to those who have heard about it is very small. Trial is the obvious solution, but opportunities are limited.

To reach the elusive tipping point, the major VR players will have to sidestep the barrier of personal trial and rely on the volume of discussion generated by those who have experienced it. In a gaming context, manufacturers should focus on a key segment: YouTubers, who can act as proxies for their legions of fans. Early adopters of the technology need to become evangelists for the hardware.

There are two areas that VR will have to overcome with regard to behavior. The first is pretty basic: VR headsets look weird, and entering an alternative reality is a fundamentally odd thing to do. It’s important to remember, however, that TV was once viewed in much the same way. Fortunately for VR, ideas spread more quickly than ever, thanks to the accelerating power of the Internet and a huge global appetite for the new. The other behavior barrier is one that millennials, in particular, might find challenging. VR is designed to immerse someone in a single experience: no multi-tasking, no texting on the side. Will Gen Y’ers accept a content platform that requires them to lock out all the other screens in their lives?

As with any emerging technology, content that works is the real silver bullet for mainstreaming VR. The first people who got you to look at their iPhones weren’t talking about the technical specs of hardware; they were showing you a clever new app that used the gyro sensor. In the same way, the most crucial factor in the uptake of VR is the software experiences it enables.

And beware the potentially exponential effects of bad content. Unlike other mediums, VR is uniquely capable of producing a visceral response. When this is done well, a user has an experience that literally transports her to another world. Done poorly, effects ranging from nausea, dizziness, and vertigo will keep trial from becoming habit.

So what chance does VR have?

My own experiences show that VR will launch with some incredibly powerful content. “Alien: Isolation” on Oculus is a horror game scarier than the most well-crafted movie. “Under the Sea,” a demo from HTC/Valve, gives you a sense of awe that rivals SeaWorld, and “The Getaway” (a small segment of “The London Heist” game) from Sony puts you in a virtual car chase shoot-out that’s much more fun than non-virtual gaming. These are experiences that impress a nerdy guy who was excited about VR long before he got his hands on an Oculus DK1. But are they truly mass?

If my dad’s polite but uninterested reaction to his first virtual roller coaster ride was any indication, I’d say not quite. But it’s probably unfair to judge the medium on today’s early proof-of-concept software; it’s the next year that will need to take the experience beyond a tech demo to attract large audiences. Ultimately, it’s all about experiences as genuinely social as those Mark Zuckerberg first talked about when he announced the purchase of Oculus:

“After games, we’re going to make Oculus a platform for many other experiences. Imagine enjoying a courtside seat at a game, studying in a classroom of students and teachers all over the world, or consulting with a doctor face-to-face, just by putting on goggles in your home.”

These types of experiences will overcome the trilogy of barriers. And we won’t have to wait long for the great content that will be the catalyst for VR to emerge as a media channel for the masses.

Matthew Day is Strategy Director at MediaCom UK, and a willing guinea pig for the current crop of VR offerings.