Like you, I assume that the environment I am sitting in right now is pretty safe. I mean, I don’t see anything dangerous, feel uncomfortable, or smell anything that I should be worried about. Yet I may be filling my lungs with harmful elements that my cognitive sensory abilities are incapable of noticing.

To detect the level of harmful elements in the air, I’d typically need a machine with a fairly large footprint, which isn’t the most convenient thing to carry around. To solve this, Vera Kozyr and Igor Mikhnenko, cofounders of design firm NotAnotherOne, have developed the Atmotube: a small, personal air quality detector that can fit in the palm of your hand and links to an app on your mobile phone (iOS and Android).

Although NotAnotherOne has a lot of experience designing consumer products for high-end clientele, this is the company’s first original product. It launched an Indiegogo campaign last week for the Atmotube, aiming to reach $52,000, and is currently at roughly 35 percent of that goal. If the target is successfully met, NotAnotherOne is looking to ship units out in March of 2016. 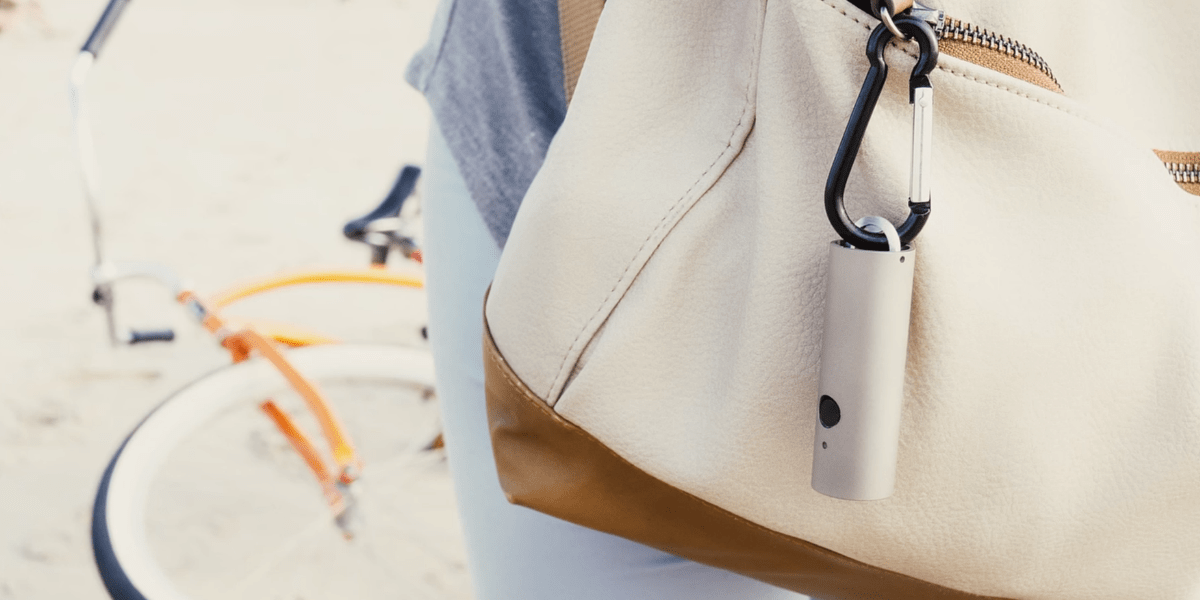 Above: Clip it anywhere

The Atmotube is about the size of a mini-LED flashlight and can be hooked to a key chain and then attached to a bag or belt loop. The exterior tube is built out of titanium, and will come in five different colors (black, metallic, copper, gold, and white).

There is also a color-changing LED, which goes from blue for excellent levels to red for extremely bad, and will give users a way to quickly check the air quality without pulling out their phone. It can also detect humidity and temperature.

The app will take advantage of crowdsourcing data from other units, and share the reports on a global map. So if I live in an area with a ton of Atmotubes in use, I can gain air quality reports for a specific region before passing through it myself. This will also, hopefully, provide a more direct visual of just how polluted our local environment actually is. 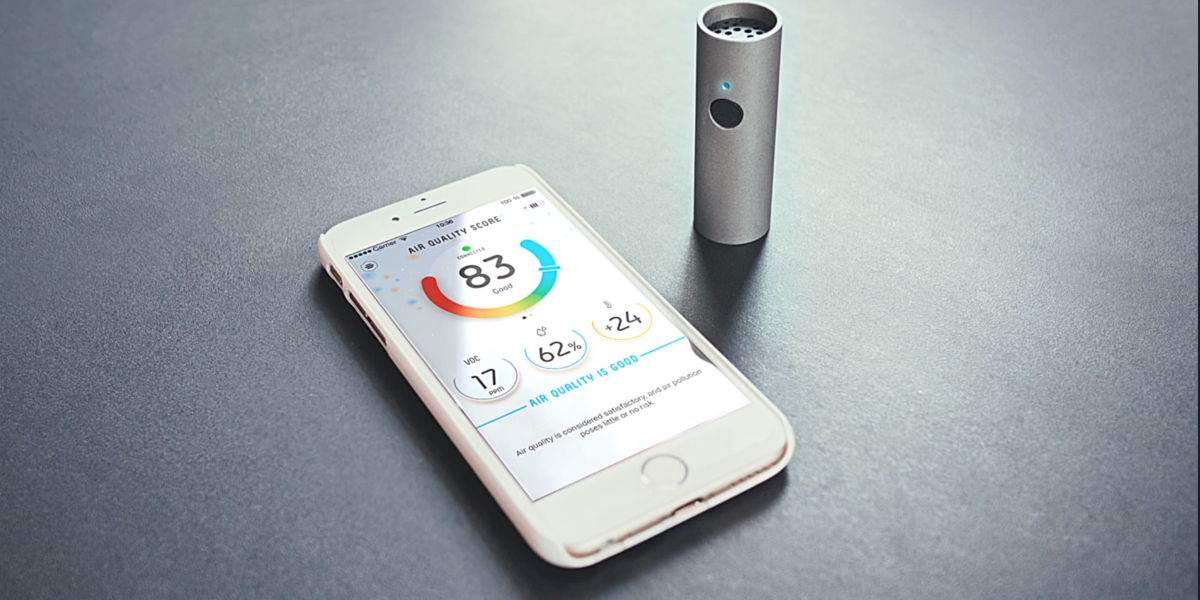 Above: Well … at least this table doesn’t seem toxic

“It’s meant to be something to make people aware and change their behavior.” explained Mikhnenko, “Sort of like the Fitbit, but with air pollution. Before the Fitbit, people didn’t really care about how much they walked, but now that’s changed.”

So how bad can air pollution be? In parts of the world like Moscow and Beijing, worse than residents may think.

Mikhnenko recalled a recent trip to China, “It was interesting, because we were touring factories in China three months ago, and we were running the demo for [the Atmotube] to this one group. And the air quality inside the room was pretty bad. So they were like, ‘Ok! Let me open the window.’ And the air quality immediately dropped! So it was like … ‘OK … Let me just close this back up.'” 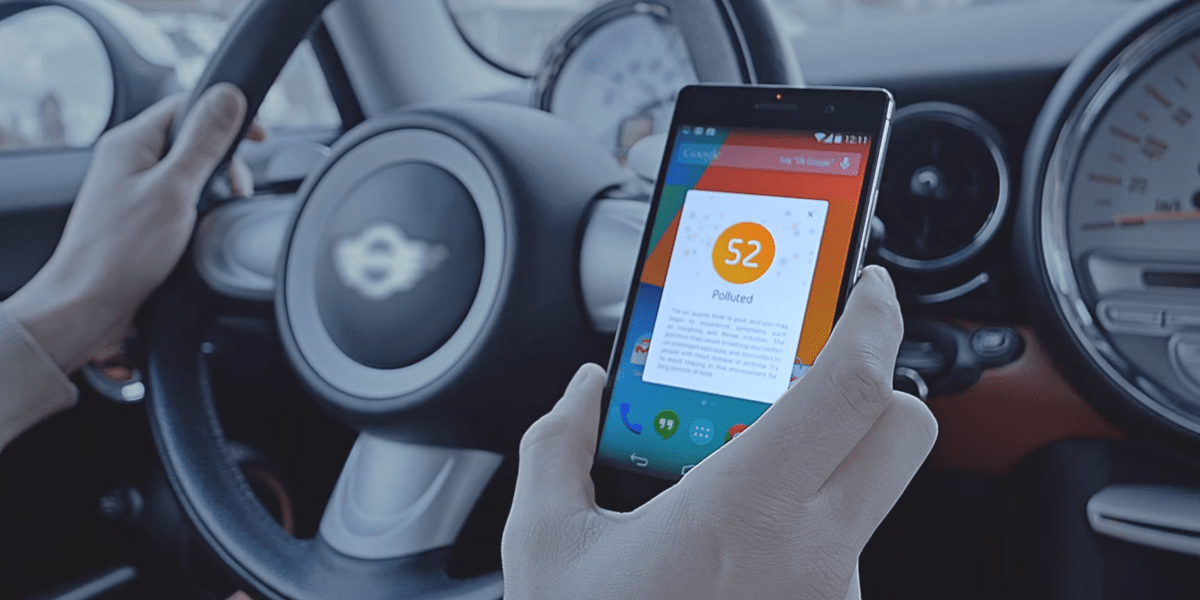 Above: Time to roll up the windows.

Things aren’t necessarily that much better in the U.S. Especially inside cars. “In cars it is interesting,” said Kozyr: “We find that when we’re in traffic, and we have the windows open, the air quality goes down! When you close the windows and turn on the air conditioning, it slightly goes up.”

And access to this kind of real-time data has made a significant change in how Mikhnenko lives his life, “Now, with this thing, I’ve changed my behavior a lot. I open the windows in my apartment much more often. I close the windows in my car. I actually stopped biking in the city because it was unhealthier than just sitting in the car … although you wind up with other health problems sitting for long periods of time, but still.”

“And I got annoyed,” Mikhnenko explained, “because this [Atmotube] got me thinking about how, right now, these cars outside are slowly killing us. Because they emit carbon dioxide and carbon monoxide. And these elements are deadly, and no one cares.”