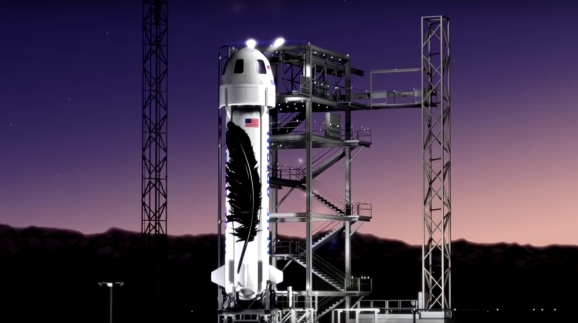 Today was a big day for Jeff Bezos. Not only did the Amazon founder send his first ever tweet some seven years after the @JeffBezos handle was registered, but he used the occasion to announce a major step in the space race: the controlled landing of a space rocket.

The rarest of beasts – a used rocket. Controlled landing not easy, but done right, can look easy. Check out video: https://t.co/9OypFoxZk3

Bezos first revealed he was entering the commercial space flight business back in April, when he announced that Blue Origin, a company that he owns, would soon be running test flights for its New Shepard spaceship, with a capacity for six people.

Before sending humans up, however, Bezos and Blue Origin have been working to land a rocket back on the terra firma after traveling to space — and this is what they did today. Sort of.

Launched at 11:21 a.m. Central Time, the New Shepard reached a height of 100.5 kilometers (above sea-level) which qualifies the mission as having traveled to “space,” though it was still only a “sub-orbital” spaceflight, something that fellow space pioneer Elon Musk was quick to point out (after first congratulating Bezos).

It is, however, important to clear up the difference between "space" and "orbit", as described well by https://t.co/7PD42m37fZ

Indeed, Musk’s SpaceX has also been attempting to develop reusable rockets, but has failed in a number of missions this year. However, Musk has been trying to launch an “orbital spaceflight,” in which a spacecraft is dispatched onto a trajectory that would enable it to remain in space for at least one full orbit of the Earth. In low-Earth orbit, as noted here, gravity is “almost as strong as gravity on the surface [of Earth],” so you have to expend more fuel to travel faster to attain so-called “orbital velocity.” In short, Musk’s Falcon 9 spacecraft had further to fall than Bezos’ New Shepard.

This isn’t to detract from Blue Origin’s efforts, however. It just helps to illustrate the difference between what Bezos and Musk have tried so far.

“Now safely tucked away at our launch site in West Texas is the rarest of beasts — a used rocket,” said Bezos. “Blue Origin’s reusable New Shepard space vehicle flew a flawless mission — soaring to 329,839 feet and then returning through 119-mph high-altitude crosswinds to make a gentle, controlled landing just four and a half feet from the center of the pad. Full reuse is a game changer, and we can’t wait to fuel up and fly again.”

Full reuse is indeed a game changer. Historically, manned space flights are enabled by a rocket that powers the capsule in which humans travel. The capsules land back on Earth (all going well), but the rockets are disposed of. The first space entrepreneur to successfully and consistently reuse the rocket element of the vehicle will help bring down the cost of space travel considerably and help make space tourism a reality.