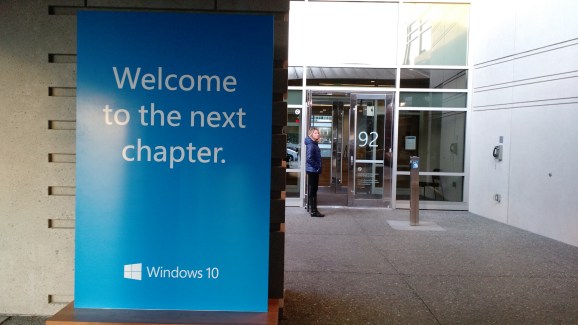 "Welcome to the next chapter" -- of Microsoft Windows, that is. At a Windows 10 press event on the Microsoft campus in Redmond, Wash., on Jan. 21.

Microsoft’s Surface team is working on a new premium smartphone, which will be ready in the second half of 2016. And it might be the pure Surface phone many have hoped for.

So says a new report from Windows Central, citing unnamed sources. The sources say that the Surface group has dropped plans for an Intel-powered Windows 10 phone in favor of the new device.

The new flagship phone, the report says, will be built by a Microsoft engineering team led by Panos Panay — the same team that built the Surface and Surface Book. The group has been given responsibility for Microsoft’s “premium” devices.

The report does not make clear whether the new device will indeed be the long-rumored “Surface phone,” however.

“The most obvious question is whether this will be the shoot-to-the-moon Surface phone that has been alleged ever since the first Surface tablet was announced years ago,” Windows Central’s Daniel Rubino wrote. “Unfortunately, details of what exactly this device is remain unknown.”

Rubino wrote that the Intel-powered phone that was cancelled appears to have been another in the Lumia line. Some people inside Microsoft are said to be unhappy with the company’s last round of Lumias — the Lumia 950 and 950 XL — which were released in early October.