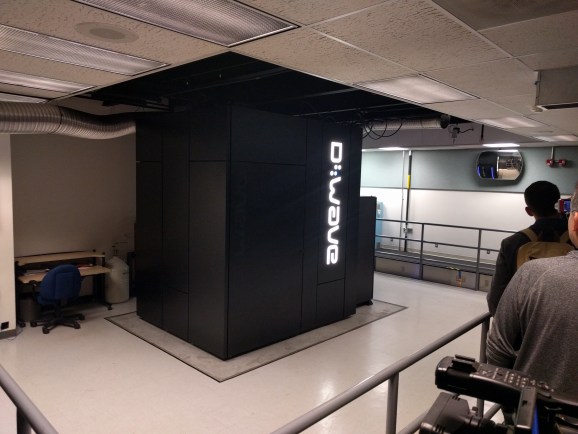 Google appears to be more confident about the technical capabilities of its D-Wave 2X quantum computer, which it operates alongside NASA at the U.S. space agency’s Ames Research Center in Mountain View, California.

D-Wave’s machines are the closest thing we have today to quantum computing, which works with quantum bits, or qubits — each of which can be zero or one or both — instead of more conventional bits. The superposition of these qubits enable machines to make great numbers of computations simultaneously, making a quantum computer highly desirable for certain types of processes.

In two tests, the Google Quantum Artificial Intelligence Lab today announced that it has found the D-Wave machine to be considerably faster than simulated annealing — a simulation of quantum computation on a classical computer chip.

Google director of engineering Hartmut Neven went over the results of the tests in a blog post today:

We found that for problem instances involving nearly 1,000 binary variables, quantum annealing significantly outperforms its classical counterpart, simulated annealing. It is more than 108 times faster than simulated annealing running on a single core. We also compared the quantum hardware to another algorithm called Quantum Monte Carlo. This is a method designed to emulate the behavior of quantum systems, but it runs on conventional processors. While the scaling with size between these two methods is comparable, they are again separated by a large factor sometimes as high as 108.

Google has also published a paper on the findings.

If nothing else, this is a positive signal for venture-backed D-Wave, which has also sold quantum computers to Lockheed Martin and Los Alamos National Laboratory. At an event at NASA Ames today where reporters looked at the D-Wave machine, chief executive Vern Brownell sounded awfully pleased at the discovery. Without question, the number 100,000,000 is impressive. It’s certainly the kind of thing the startup can show when it attempts to woo IT buyers and show why its technology might well succeed in disrupting legacy chipmakers such as Intel.

“I would say building a quantum computer is really, really hard, so first of all, we’re just trying to get it to work and not worry about cost or size or whatever,” said John Martinis, the person leading up Google’s hardware program and a professor of physics at the University of California, Santa Barbara.

Commercial applications of this technology might not happen overnight, but it’s possible that eventually they could lead to speed-ups for things like image recognition, which is in place inside of many Google services. But the tool could also come in handy for a traditional thing like cleaning up dirty data. Outside of Google, quantum speed-ups could translate into improvements for planning and scheduling and air traffic management, said David Bell, director of the Universities Space Research Association’s Research Institute for Advanced Computer Science, which also works on the D-Wave machine at NASA Ames.