Mozilla today launched an iOS content blocker called Focus by Firefox. We say “content blocker” because, although Focus is capable of blocking some ads, this latest project from the nonprofit is aimed at stopping trackers. You can download the app now from Apple’s App Store (it’s trickling out slowly, so don’t fret if you don’t see it yet).

Again, this not an outright ad blocker. There are certainly plenty of ad blockers on iOS already, though many aren’t free and some don’t let you see exactly what they’re blocking. When it comes to Focus for Firefox, the ads that don’t track you get through just fine. 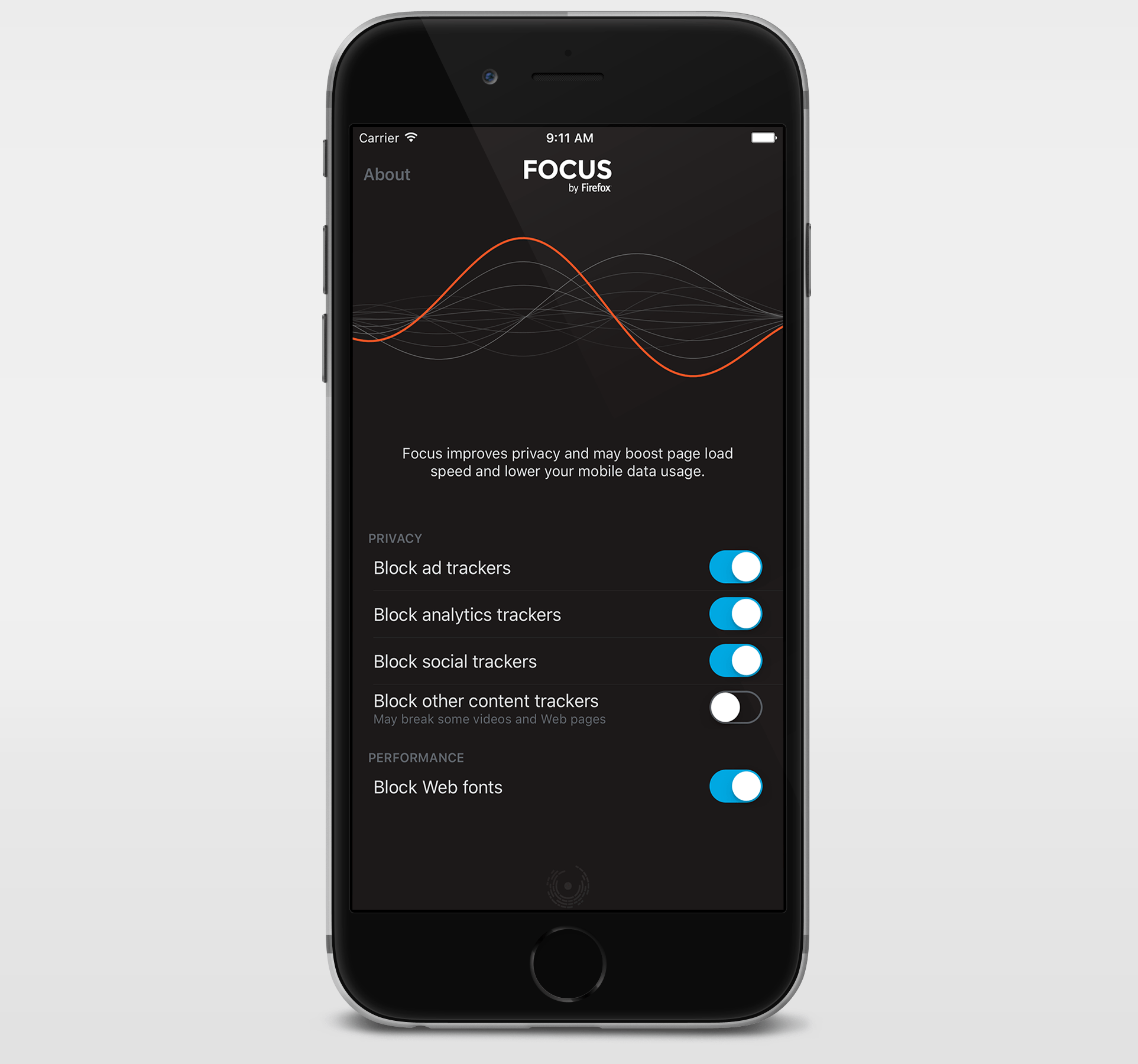 “This is our first effort,” Nick Nguyen, Firefox’s vice president of product, told VentureBeat. “Just like everything we build, we’re trying to make the Internet better, long-term.” Focus is “aligned with who we are as an organization,” he added, which means supporting the Web.

Nguyen pointed out that many other iOS 9 blockers are for-profit. They either charge you upfront or generate money by selectively letting content (including ads) through. Focus is completely free, and Mozilla is transparent about what the app does and doesn’t do.

Focus users can control what to block, including three types of trackers: ads, social, and analytics. Users can also block “other content trackers,” which essentially turns on full blocking. This option is very strict, to the point that Mozilla warns this can result in some webpages not loading correctly.

“The other content trackers category includes things like video, photo and embeddable content that tracks users,” Nguyen explained. “Turning this category on will block some video embeds and may even break some sites completely.”

Lastly, Focus users can choose to block web fonts. This can further increase performance and reduce mobile data usage, in addition to the cleaner and more private browsing experience achieved with blocking trackers. 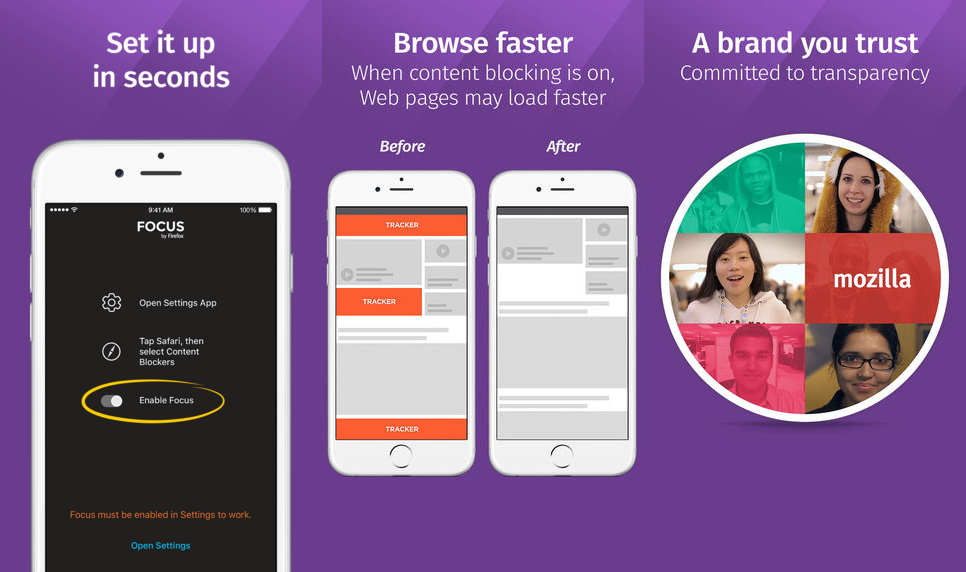 Focus by Firefox uses the same blocking list as Firefox’s Private Browsing mode on Windows, Mac, Linux, and Android. This list, published under the General Public Licence, is based on the tracking protection rules laid out by the anti-tracking startup Disconnect. Anyone can view that open-source blocklist over on GitHub.

“We think Disconnect’s public list provides a good starting point that demonstrates the value of open data,” Denelle Dixon-Thayer, Mozilla’s legal and business officer, said in a statement. “It bases its list on a public definition of tracking and publicly identifies any changes it makes to that list, so users and content providers can see and understand the standards it is applying.”

This is the Mozilla way. The company tries its best to help the typical Internet user with a better software experience, and anyone who wants can look at the source code, which in this case is really just a well-organized list of URLs.

That said, we confirmed with Mozilla that Focus will be open-sourced. “Focus will be released under the terms of the Mozilla Public License (MPL) 2.0, which is the same open-source license for Firefox,” Nguyen told VentureBeat.

“This was not our choice — Apple has chosen to make content blocking unavailable to third party browsers on iOS,” Nguyen said in a statement. “Apple Developer Guidelines do not allow us to incorporate their Content Blocking API into Private Browsing on Firefox for iOS. We would love to see this API open up in the future. We are exploring how we can provide this feature on Firefox for iOS and will deliver it as soon as it’s possible.”

In fact, Nguyen went further. “We want to build it into anything that runs iOS 9,” he told VentureBeat. That means, if Mozilla could, it would let Focus users filter the content on any iOS app accessed on the mobile Web.

And that’s the bigger picture here. Mozilla has built a content blocker that is aimed at improving the online experience for iOS users without blindly blocking all ad revenue sources for publishers and websites. If your ads don’t track your readers and visitors, Focus won’t significantly alter your site.

And Mozilla has done so despite Apple’s limitations on the iOS platform. Keep in mind that in 2013, the company refused to bring its browser to iOS, putting the blame on Apple for not letting browser makers use their own rendering engine.

Nguyen told VentureBeat the company is hoping to build an open feedback loop not just for Focus but for monetizing content on the Web, in general. The broader goal is to reduce the weight of content in a way that is transparent about the use of tracking.

Mozilla is naturally also looking for feedback on Focus by Firefox, the feature set of which is already being further developed.