Cialfo is a Singapore-based edutech startup that was kicked off in 2012 by two young entrepreneurs who met while studying at the Nanyang Technological University. A college entrepreneurship project brought them together in their fourth year, and they spent most of that year looking into an idea for a startup. Both were interested in the education space.

Despite being told their idea wouldn’t work — for reasons including the size of the market and challenges around generating significant revenue — they eventually met an individual who cofounder Rohan Pasari, 26, said “changed his life forever.”

“She said that most people look at risk just from one side: What if you try to do something and you fail?” Pasari told VentureBeat in an interview, remembering the conversation. “But people don’t look at risk from the other side, which is, what if you don’t try something, then someone else does it and succeeds? You would feel like you had this great idea and didn’t even try it.”

At the time, Pasari was 22 and his cofounder, Stanley Chia, was 24. They spent the next 6-8 months on research, going into the market to talk with educators and students, as they developed their ideas and sought feedback. Chia had majored in Accounting, while Pasari had majored in Engineering. If the startup didn’t start work out within the first year, the two agreed they were “smart enough to get a job” and leave behind the world of entrepreneurship. 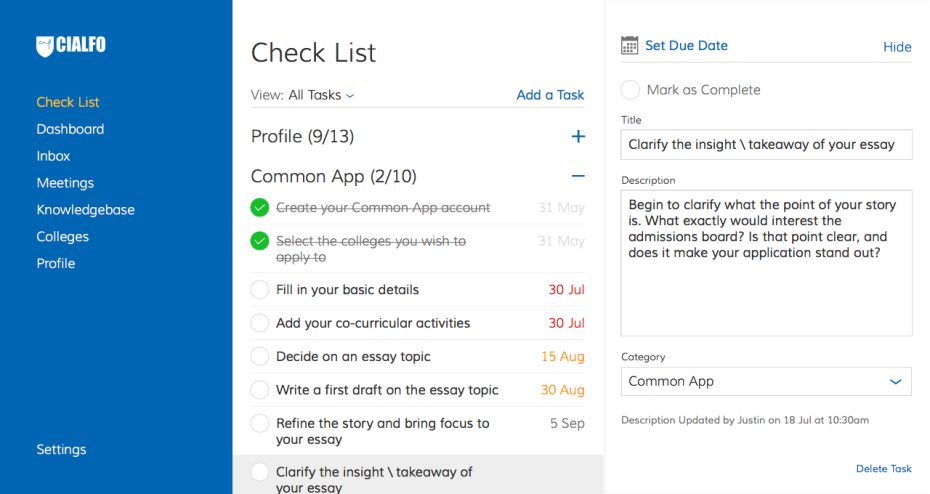 Back in 2012, Cialfo started out as a bare-bones service to help students in Singapore with their applications to colleges and universities in the U.S. and U.K. The platform was at more of an MVP stage, not exactly what the team today would consider a real “working platform” — there was still too much slow, manual input needed – not enough automation.

Also fairly early on, the two decided to start a bolt-on essay service whereby they would help students with ideas and structure, but never write the essays per se (not even “sample” essays, as some services offer). Helping the students understand what career path and subjects they are most interested in is also part of what Cialfo does, above and beyond simply providing the application platform.

Paying users are allocated a consultant to walk them through the whole process. If the student is based in Singapore, they can meet with a consultant in person on a weekly basis or as needed. If they’re outside Singapore, virtual meetings are arranged. In all, students could spend as much as 2-3 years with Cialfo’s service, depending on their needs.

Prices for the first two years are pegged at around $1,800, with the final — more intense — year costing about $5,800. Pasari says that the technology has reached a stage now whereby close to 70 percent of what Cialfo offers as a product is entirely automated.

Video tutorials for stuff like interview preparation are slowly being added to the platform. “A lot of students in Asia don’t understand that Stanford is not an Ivy League [college], for example, and that Dartmouth is,” Pasari said. “So there’s a lot of misinformation that they get to understand [through us].” 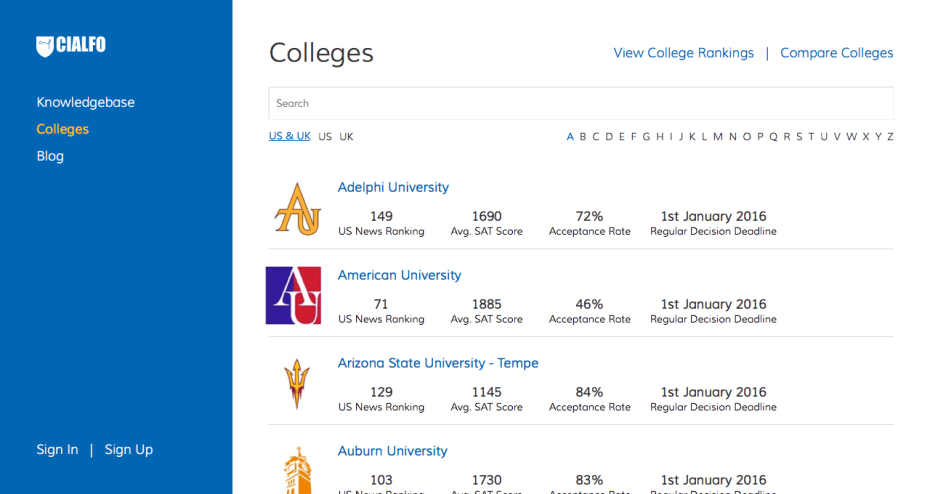 Outsourcing tech to India ‘didn’t work at all’

“It’s not been easy,” Pasari said. “It’s been expensive, yes. To be honest, we started off by outsourcing [the tech development] to a company in India, and that didn’t work at all. So then we took it in-house, and hired more engineers.”

He added: “Now we realize that when you’re working on a tech-enabled product, there’s a lot of iteration to be done. It’s not a good idea to outsource something that needs iteration… because it needs a constant feedback loop with users [and] consultants, and an outsourced company will not be able to manage that — changes in direction, changes in features.”

While building out all that tech is expensive, spending on marketing to educate consumers in Singapore and the region has been a big cost, too, as has hiring experts in the education and admissions space.

Cialfo opened offices in Shanghai and Guangzhou for its July expansion into China, a market where it’s seeing far more local competition than in Singapore. But for now, 85 percent of revenue is still generated from Singapore. Other small markets for Cialfo include the likes of Indonesia, Malaysia, and India — but they’re not a primary focus.

At the end of October of last year, the startup closed an $800,000 seed round, ending a long period of bootstrapping. By that point, the team was already “operationally profitable,” meaning they could maintain a steady operation, but not really afford to ramp up ambitious scaling efforts. The team now has 13 full-time staff. Most of that late-2014 round was injected into the China expansion and development. 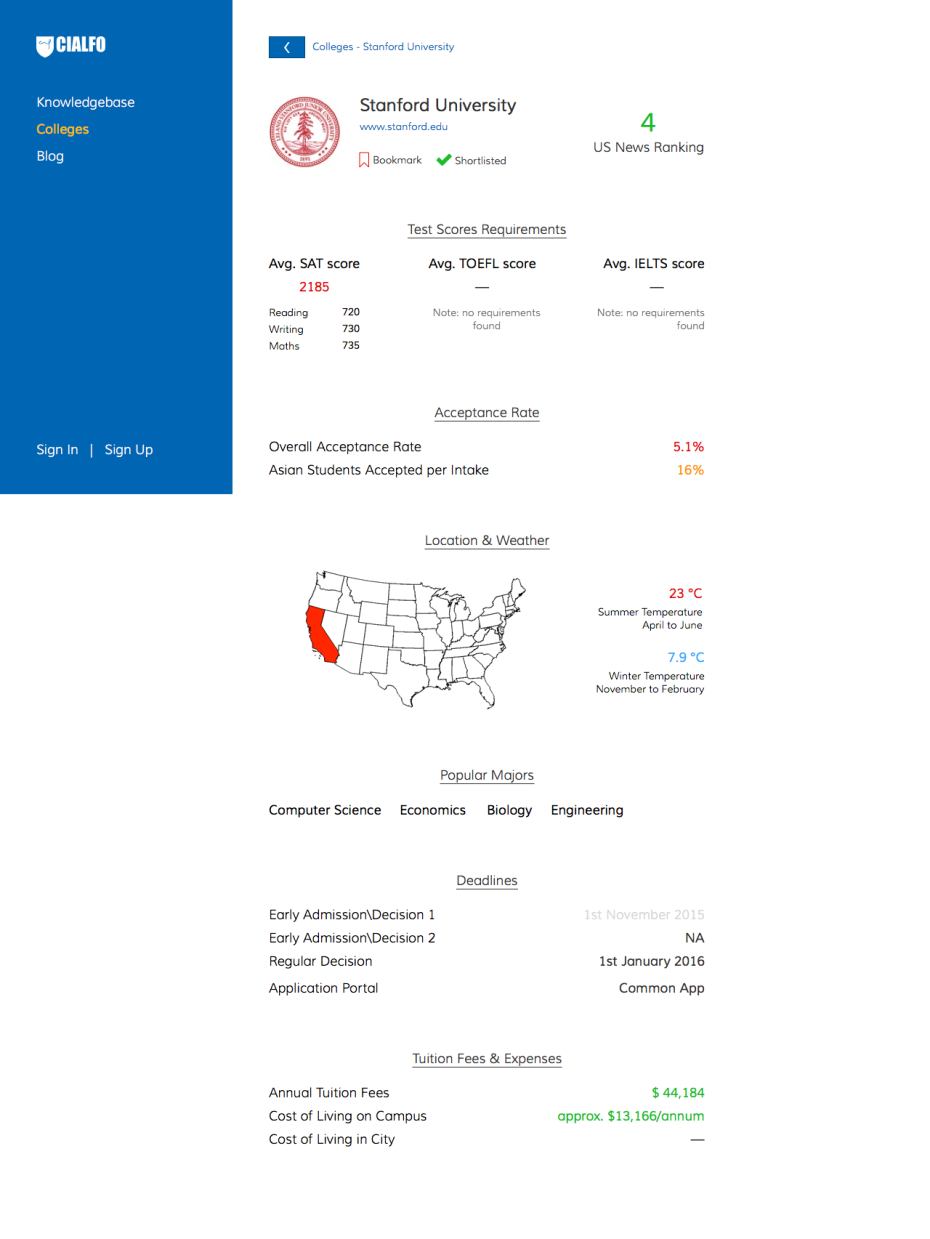 “The market [in China] is very different,” Chia said. “On the offline side, we have like 4-5 companies that are four times larger than us in each city. So that is a good sign that the market is huge over there. The range of customers we can work with is also much larger.”

“China has one of the largest higher-middle income class. So in terms of price points it’s even more varied. When we went over in July, there was a lot of homework to do around how we packaged the program, how we customized it to the cultural context.”

Cialfo is forecasting that China will account for 40 percent of their revenues in 2016, due to the sheer market size. To date, the startup has raked in $1.4 million in revenue. About half of that revenue has come this year, with sales cycles anywhere between 30-60 days. Pasari declined to comment on user numbers, but says they’re seeing “reasonable” user acquisition costs. Web use still dominates over mobile.

To date, about 60 percent of students on Cialfo’s platform have been accepted into the top 20 colleges in the U.S. and U.K., where the average acceptance rate is around 5-15 percent, Pasari said.

The Cialfo team participated in the Silicon Valley-based accelerator Black Box, aimed at non-U.S. startups. That helped them find board advisors from the U.S., bringing a non-Asian perspective to its operations. The startup is considering India as a possible third market in future, but it’s still early days — and China remains the beast to tackle.

“Southeast Asia is actually very fragmented, so we can’t see [it] as a country,” Chia said. “The language and the culture is different from island to island. But in China, although Shanghai is very different from Guangzhou or Chengdu, at least the language and need is similar. It’s the same in India.”

If anything, Cialfo expects China to increase profit margins by quite a bit — and it will position its offering toward the more premium end of the market. As far as India goes, Pasari said they’re now hiring a five-person tech team out of the country, but admits it’s no longer as cheap a solution as it once was.

Next year, the startup is looking to raise a single-digit millions round, and investor interest is already apparent. That will see the team size increase to 25 people, with most hires coming from China and India.