The NHS (the U.K.’s publicly funded health body) has teamed up with Tinder to help raise awareness among young people about organ donation.

Over the next two weeks, the popular dating app is enlisting the help of a handful of local celebrities, including Olympic gold medallist Jade Jones, Made in Chelsea’s Jamie Laing, and Emmerdale’s Gemma Oaten, who have agreed to put a little “The Wait” logo on their verified Tinder profiles. “The Wait” refers to the 7,000 people currently on the organ transplant waiting list in the U.K. This initiative follows a recent report from NHS Blood and Transplant stating that the number of people donating organs after death has declined for the first time in ten years. 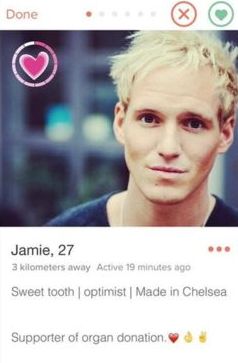 In terms of how this initiative will help promote organ donation, anyone who swipes right on a profile that sports a “The Wait” logo will see a message that says: “If only it was that easy for those in need of a life saving organ to find a match.” They will then be informed that there are thousands of people awaiting transplants, and will be invited to sign up to the NHS Organ Donor Register.

Along with many other countries, the U.K. has traditionally operated an opt-in system for those consenting to donate their organs after death. However, Wales — one of the four constituent nations that makes up the U.K. — recently switched to opt-out, meaning those who have lived in Wales for more than a year will have to inform their local NHS if they do not wish to donate their organs.

Tinder has emerged as the de facto dating app for many young people, but it was recently blamed by some doctors for helping to increase the rate of sexually transmitted infections (STIs). “Apps have to invest more time in pushing a safe sex message,” said Dr. Peter Greenhouse, one of the U.K.’s leading sexual health doctors.

While it may be unfair to blame apps such as Tinder for broader societal issues, the app does hold a great deal of sway among young people. And until other countries follow Wales’s approach, partnerships such as this are a good way of tapping into the younger demographic — the NHS says it’s specifically targeting the 18- to 35-year-old age group with its campaign.