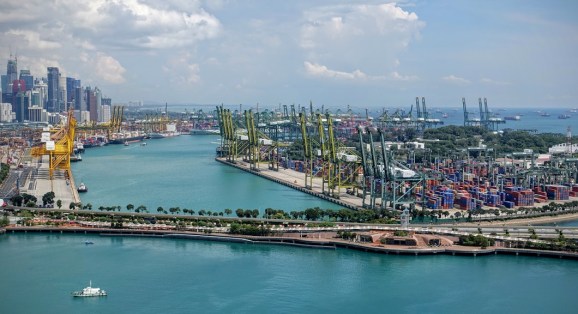 Uber was founded just six years ago. It’s come a long way since. In its latest funding round, Uber was valued at $68 billion, more than Netflix and Twitter combined.

But industries change slowly. With all the hype, Uber still just has 13% market penetration in New York, with traditional taxi companies responding by also going online.

Netflix launched in 1999, but Blockbuster didn’t shut its doors until nearly a decade later, forced out by online streaming platforms. If anything, 10 years was fast. Twenty years after Expedia was founded, only 32% of leisure travel is booked with online travel agents, while airline websites steadily take back market share.

With slow changes it’s not easy to identify the tipping point. But in one sector — freight — it’s starting to become quite apparent.

Yes, freight. Just about everything people eat, wear, and use is manufactured in China, woven in Vietnam, or grown in Brazil. Most products are shipped by ocean or air. And while world trade is massive — $19 trillion dollars worth of goods are shipped cross-border annually — cutting-edge and logistics are not traditional bedfellows.

For example, if you want to import hoverboards from China, you’d find it would take an average of three days to get pricing online (while you can book a flight in seconds). And because of offline processes, you’d probably overpay, even though there is an unprecedented amount of spare space on ships. To make it even more difficult, there will probably be more faxes and phone calls involved in the shipment than the last time you bought a car.

But whether it’s from massive logistics companies, tech giants or startups, that’s changing.

Pitching our Series A to VCs in 2013, I could barely get meetings for a logistics startup. When I did, I got more yawns than checks. That’s changed dramatically for logistics startups around the world.

Amazon is getting into freight. Rumors are flying of an Amazon air cargo operation. The company already makes deliveries with thousands of Amazon-branded trucks and operates over 165 fulfillment centers around the world. Not be left out, Uber is getting into the last mile cargo market.

But the tipping point isn’t necessarily coming from technology leaders.

While market leaders slowly turn their huge ocean liners, nimble startups are popping up. Tech-powered freight forwarders like iContainer ($1.4 million, April 2015) and Transporteca are emerging to compete with industry incumbents, as is Flexport ($20 million, August 2015), a Y-Combinator graduate. Fleet (née Shipstr) is filling a key niche as a Yelp for reviewing forwarders, while at Freightos ($14 million, September 2015) we started automating forwarder pricing in 2013 and released a beta marketplace for freight quote comparisons across multiple forwarders this year.

The “Uber-for-Trucks” business model is taking off too. In early 2015, Cargomatic picked up $8 million in funding to connect companies that need to ship goods with truckers. Jeff Bezos and an Uber cofounder are investors in Convoy, another Uber for trucking. Transfix ($14.5 million, November 2015), Trucker Path ($20 million, June 2015), Cargo Chief ($10 million, September 2015), Quicargo, and others are also in the race. This isn’t limited to the US; a recent Goldman-Sachs logistics report found an influx of Uber-type trucking apps in China.

Smart money is on a wave of modernization in the freight industry. The enabling technologies are in place, startups are well-funded, and incumbents are also moving online. The demand is there too, with shippers expecting better, more automated services.

It’s true that it takes a long time for industries to change, but 2016 is the year where freight embarks wholeheartedly on that road.

Zvi Schreiber is the CEO of Freightos, a logistics startup handling international freight. He has founded and led multiple tech companies, some of which have been acquired by companies like IBM, GE, and VerticalNet.