The Lego Education WeDo 2.0 system is a combination of hardware and software that gives elementary school children more than 40 hours of hands-on projects.

Lego Education, a division of Denmark’s Lego, unveiled the system at the 2016 International CES, the big tech trade show in Las Vegas this week. The robot itself is a wireless, tablet-ready system that is designed for a younger crowd. The company’s Lego Mindstorms robots are targeted at middle school and high school students, who use them to build robots that can complete tasks and win competitions.

The lessons correlate to educational standards in physical sciences, life sciences, earth and space sciences, and engineering. The lessons are designed to motivate students (in second through fourth grades) to solve real-world science problems.

Lego says that students can use WeDo 2.0 to explore, create, and share their scientific discoveries as they build, program, and modify projects. Teachers receive support through training, curriculum, and built-in assessment. There are eight guided projects and eight open-ended projects. 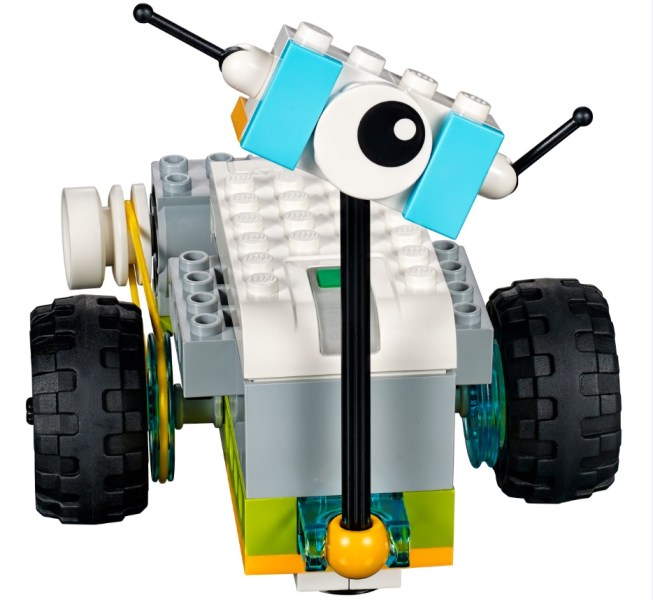 Above: Here’s the robot that comes with the Lego Education WeDo 2.0 system.

In the “Drop and Rescue” project, students have to design a device to reduce the impacts of a weather-related hazard on humans, animals, and the environment. Students can prototype solutions where there isn’t just a single right answer.

“Teachers know that science and technology skills are crucial for today’s elementary school students, but providing engaging projects that mean something in the real world is a challenge,” said Jeffrey Marlow, a geobiologist at Harvard University and founder of The Mars Academy education and development program, in a statement.

Other projects let students discover the surface of Mars with a model rover, or explore the Amazon rainforest through frog metamorphosis.

“These science lessons do more than just teach students facts to memorize,” Marlow said. “They represent an immersive experience that instills a deeper understanding of the scientific method and evidence-based reasoning.”

The platform includes a Bluetooth low-energy Smarthub element; an electronic building brick that is part of the LEGO Power Functions (LPF), a new technology platform for LEGO Education; and one motor, one tilt, and one motion sensor. It also includes the WeDo 2.0 Core software, which lets kids program through a drag-and-drop graphical user interface.