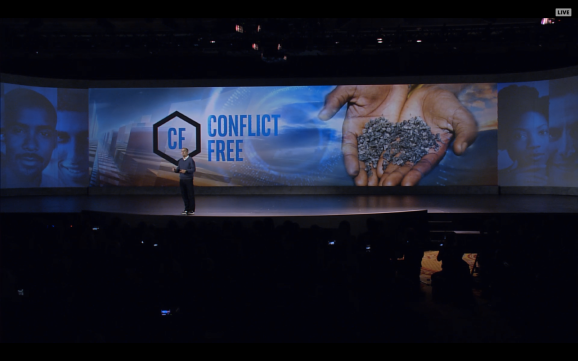 Every single product that Intel ships will be conflict-free, the chipmaker’s CEO, Brian Krzanich, said today at the 2016 Consumer Electronics Show in Las Vegas.

And Intel will be making this plainly visible to consumers.

Krzanich said, “You can look for the conflict-free symbol in all of our products” starting in the second quarter of this year.

This shows Intel executing on a long-term commitment to achieving a conflict-free supply chain. Intel has been focusing on this issue of avoiding conflict minerals — gold, tantalum, tin, and tungsten — for nearly five years. The issue has to do with not supporting conflict through mining for these minerals in the Democratic Republic of Congo.

There is an interesting footnote to today’s announcement that Krzanich did not include in his keynote. It has to do with Intel’s $16.7 billion acquisition last year of field-programmable gate array (FPGA) maker Altera.

“Our ‘conflict-free’ statements in this press release may not apply to products of Altera Corporation,” Intel noted at the bottom of its press release for today’s keynote.

Nevertheless, this is an achievement for Intel, which sells modems, storage, networking components, and other equipment, in addition to processors that go inside servers, PCs, mobile devices, and wearables. Intel chips became conflict-free in 2014, Krzanich said.

Apple has also been in the process of implementing a conflict-free supply chain, and the company released a report last year showing its progress.