While some of the world’s biggest tech companies were dazzling attendees in giant ballrooms at the 2016 CES expo in Las Vegas, Twitter quietly spent an incredible amount of money, time, and effort building a miniature “city” that pretty much nobody saw.

It is strictly not open to the press, but I made it in anyway.

On Wednesday, a very friendly PR flak asked me if I wanted to check out the company’s invite-only exhibit.

“It’s private in the sense that there’s typically no press, but you can come by if you’d like,” she told me.

A chance to quietly invade the heart of one of tech’s biggest companies in the world’s largest tech expo? Say no more.

I was escorted from the lobby of the Cosmopolitan Hotel up the central escalators. We passed a demo table for a really cool-looking maglev car, which looked way out of place in the empty space near some nondescript elevators. Maybe the room would be packed later? Vegas casinos are giant and confusing.

“We’re going in a back way,” my guide informed me as we approached some giant stage doors. I tucked my press pass into my jacket as the security guard nodded us through.

A narrow black corridor was littered with crates, cables and all the other things you would expect to see backstage. We stepped over some boxes and walked around a false brick wall into a miniature town that looks like an indoor Truman Show. It seemed bizarre and superfluous, even in a place like Vegas which has a fake indoor Paris, a fake indoor New York, a fake indoor Egypt, a fake indoor Roman palace, and a real Trump property.

The first thing I saw upon entering was @Jack #Dorsey sitting on a park bench (still indoors), absently looking at his phone with those big, sad beagle eyes. He looked tired, which is probably an understatement.

But the “park” was a giant pitch of astroturf lined with benches, street lamps, a voting booth, and a giant illuminated art installation in the shape of Twitter’s new-ish heart.

Our latest installation measures the Twitter pulse during CES. At Twitter City in the Cosmopolitan Hotel. pic.twitter.com/akw7BA3Q4K

The park was lined on two sides with “shops,” some of which were showcasing Twitter-affiliated products; others were #cozy living rooms with bookshelves stocked with prop books. There was a “movie theater” with a glowing marquee, a “record store,” a “garage,” a “salon,” a “pizza place,” and a “sports bar” that was empty save for one stoic “bartender” and a single unlabeled beer tap. I have no idea if it actually dispensed beer, but I’m not sure which answer would surprise me more. If you’ve already built a fake city, is it too extraneous to make your own fake beer?

LIVE on #Periscope: Twitter City @ces2016 is beyond amazing https://t.co/PCLl0dPDAD

My brief time in Twitter City was over after about 15 minutes. I tried my best to sneak a couple of photos while grabbing coffee from the above-average catering table, but you can probably guess why I’m showing photos from Twitter employees. I spoke to nobody except the person who slipped me in through the back.

Twitter City was far from the most ridiculous stage setup I saw at CES, but what struck me was how quiet and hidden it was. I have literally no idea where the front door would be located.

What also struck me was the contrast between this hidden world and the conference areas for other companies. Here is Microsoft, which opted for a decidedly more “Holiday Inn Express” vibe: 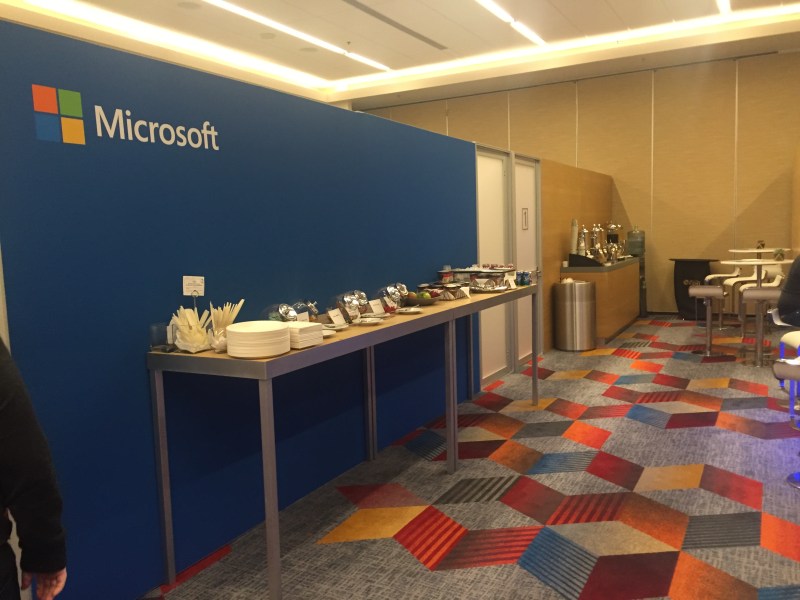 (Microsoft, by contrast, is a profitable company.)

Twitter City seems like an overly involved stunt for a company in a huge transition period. There’s nothing wrong with developing a big, flashy “experience” surrounding your company and product — that’s the only point of CES. (Showing off helpful, realistic products is certainly not the point.)

But it is weird to go through the trouble and considerable expense of making a fake town, only to hide it behind the fortress walls of a flashy casino. Twitter’s CES goal may be to show how it makes everything more shareable, but they sure aren’t interested in sharing Twitter City.