There are still billions of people in the world who don’t have a personal computer. The Endless Mini is for them.

The new ball-shaped computer from Endless is a $79 machine aimed at bringing the next four billion people into the information age, said Matt Dalio, CEO and chief of product at Endless. He showed off the Endless Mini at the 2016 International CES, the big tech trade show in Las Vegas last week.

Dalio, who spoke with VentureBeat in an interview, started the company in 2012 to create a fully functional desktop PC with an elegant design. It looks like a small bowling ball, with a strip of color, and isn’t intimidating. The PC supports the latest Bluetooth and Wi-Fi standards and is built to work in regions where there are low-bandwidth broadband connections, or regions without access to the Internet. 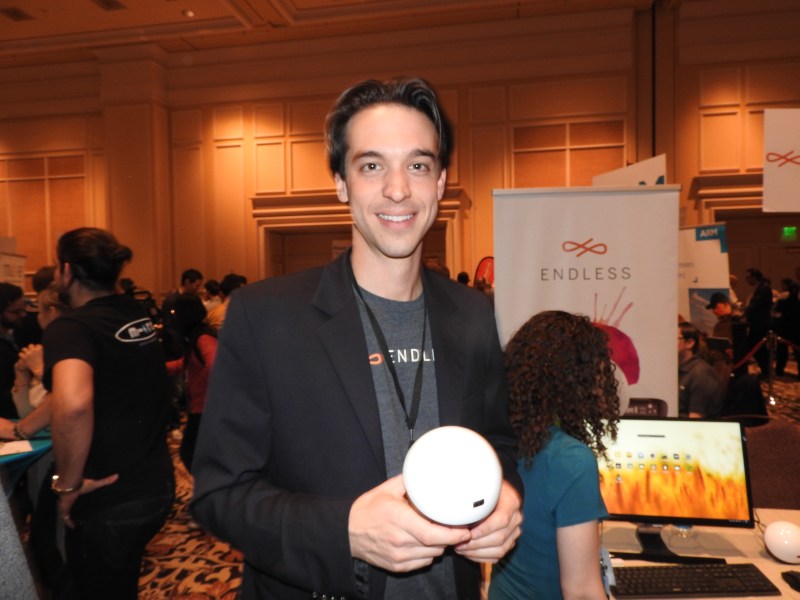 The Endless Mini comes with 100 preloaded applications, like Wikipedia. All that you need to get started is a keyboard, mouse, and some kind of monitor — most will use their TV as a monitor. Storage is available in two options: 24GB or 32GB (for $20 extra). The machine has an ARM Cortex-A processor (Amlogic S805 quadcore), 1GB of random access memory, three USB ports, HDMI output, composite video output, an Ethernet port, and its own Linux-based operating system, dubbed Endless OS.

As for why it is shaped like a ball, Dalio said, “We do a ton of user research and what became clear through all of our research is that people [in these markets] want things that are bold, shiny, colorful. They want things that will draw attention and make thems proud to have it standing proudly on their desks. We designed across a range of aesthetics and this was the one that clearly jumped from our users’ mouths as their favorite.”

Dalio said there are 75 people in the company, with only three dealing with hardware. Most are focused on the operating system, which has a full window system. Applications include word processing, presentations, spreadsheets, games, and Khan Academy educational lectures.

“If people don’t have Internet, what do they do?” Dalio said. “We need to make a computer with Internet, without Internet, and something in between where it is spotty.”

Endless is targeting emerging markets and has hired new people in China, Brazil, and Mexico.

Of course, there are lots of cheap computers out there, like the Raspberry Pi. And there are smartphones aplenty too. But not everyone has access to cellphone service, and Dalio pointed out that a Raspberry Pi computer winds up being more expensive, at $91, with all of its components.

“The truth is, hardware is a commodity,” Dalio said. “The real value of our company is in the people who are focused on the applications.”

Here’s a video of Dalio explaining the Endless Mini (along with photobombers).