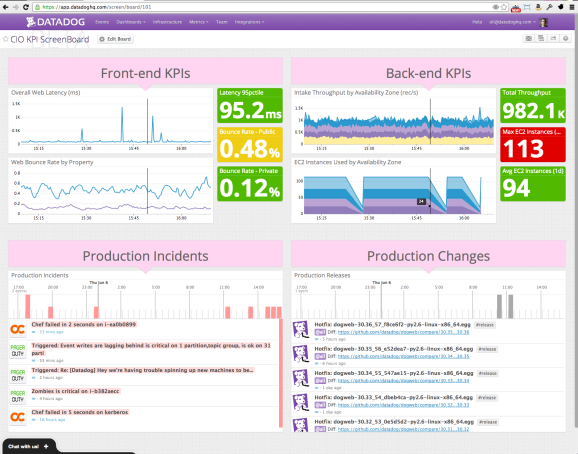 A dashboard in Datadog.

Datadog, a company with a cloud service for monitoring the performance of applications and their underlying infrastructure, is announcing today a $94.5 million round of funding — a hefty pile of money considering that the company revealed a $31 million round less than a year ago.

Datadog offers developers and operations staffers a way to keep track of how everything in their tech stack is doing. It can provide dashboards, send alerts, and store information on who fixes bugs and how. Plugins for cloud infrastructure, databases, operating systems, and other software elements are available.

Datadog started in 2010 and is based in New York. Some of the new money is allocated for expansion in Asia and Europe: In October the company announced plans to establish a research and development office in Paris. Customers include AdRoll, Airbnb, EA, Spotify, and Twilio.

Iconiq Capital led the new round in Datadog with participation from Amplify Partners, Contour Ventures, Index Ventures, and OpenView Venture Partners. To date, the company has taken on nearly $148 million in funding.