The PC market ended its poor year with another negative quarter. Both Gartner and IDC agreed: PC shipments were down globally, again.

As you can see in the chart below, Gartner said Apple was the only company among the top vendors that experienced an increase in PC shipments. Acer saw particularly poor results with double-digit declines.

IDC, meanwhile, estimated worldwide PC shipments dropped 10.6 percent to 71.9 million units in the fourth quarter. The firm noted “the year-on-year decline in 2015 shipments was nevertheless the largest in history, surpassing the decline of -9.8% in 2013.” The top five vendors in IDC’s results were Lenovo, HP, Dell, Asus, and Apple.

IDC agrees with Gartner that Lenovo, HP, and Dell were down, as well as that Apple was up. However, IDC showed Asus with a small positive bump: 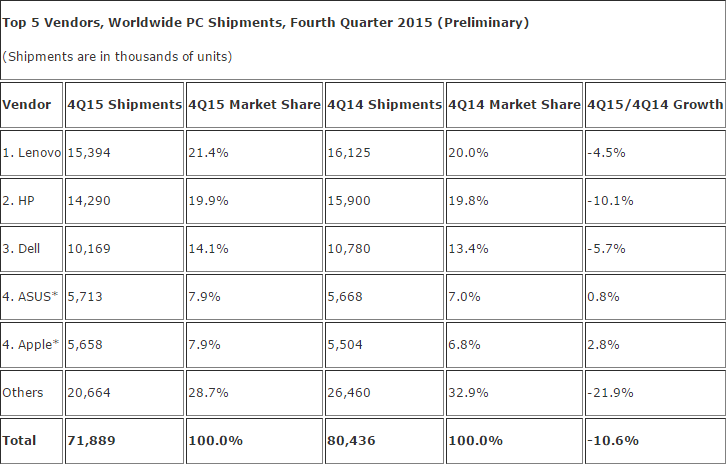 But both agree that Apple outperformed the top PC vendors when it comes to this most recent holiday quarter. This means that every quarter in 2015 was a decline compared to each respective quarter in 2014.

“The fourth quarter of 2015 marked the fifth consecutive quarter of worldwide PC shipment decline,” Mikako Kitagawa, principal analyst at Gartner, said in a statement. “Holiday sales did not boost the overall PC shipments, hinting at changes to consumers’ PC purchase behavior. On the business side, Windows 10 generally received positive reviews, but as expected, Windows 10 migration was minor in the fourth quarter as many organizations were just starting their testing period.”

Gartner also added that it was expecting a decline of 1 percent this year compared to 2015, “with the potential for a soft recovery in late 2016.” IDC painted this year in a more positive light.

“The PC market remains competitive and the economic environment weakened further with the recent drop in the Chinese stock market,” IDC vice president Loren Loverde said in a statement. “However, PC replacements should pick up again in 2016, particularly later in the year. Commercial adoption of Windows 10 is expected to accelerate, and consumer buying should also stabilize by the second half of the year. Most PC users have delayed an upgrade, but can only maintain this for so long before facing security and performance issues. We continue to believe that a majority of these users will purchase another PC, motivated by new products and attractive pricing.”

2016 is the first full year that we’ll see whether Windows 10 can help reverse the PC market’s decline.