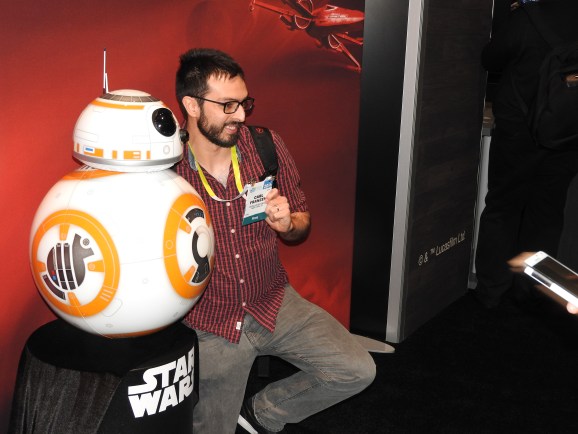 BB-8, the new droid from Star Wars Episode VII: The Force Awakens, was a major attraction at the 2016 International CES.

This character wasn’t brand-new at the event, but the popularity of the new Star Wars movie made it a big hit anyway. People lined up to see the droid at the Sphero booth at the big tech trade show in Las Vegas last week.

The BB-8 droid designed by Sphero is a mini version of the character from the movie. I’d seen BB-8 from afar, but I didn’t realize how fast it could move (4.5 miles per hour). You can set it up to patrol or send it commands with your voice. You can record and view virtual holographic videos with it. And it has its own attitude, as well.

The BB-8 from Sphero is iOS and Android compatible. It operates over a Bluetooth Smart connection, with a range of 100 feet. It charges via inductive charging, and its internal guidance system includes both a gyroscope and an accelerometer. It is 11.4 centimeters tall and has a battery life of 60 minutes.

Here’s BB-8 in action. I’ve added a better video by Sphero, as well. Yes, as the video says, this is the droid you are looking for. It will set you back $150.