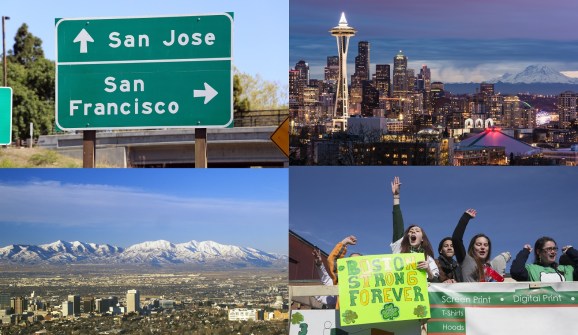 I have always held a reverence for Silicon Valley as the global epicenter for innovation in technology. But greatness usually comes with tradeoffs, and Silicon Valley’s profound success naturally breeds a kind of provincialism as it relates to culture. It’s time to tear down the Valley’s walled garden and allow in a few outside ideas — a kind of open source approach to building culture.

What would the perfect tech culture look like? In 2004, I cofounded Pluralsight (based in Utah) with colleagues in California, Massachusetts, and Maine. In the past two years, we have acquired seven companies from Boston, Chicago, Oklahoma City, Orlando, Seattle, and San Francisco. As we’ve folded all of these companies together, we found aspects of each of their regional cultures that were so compelling, we wanted to extend them to the full company.  Taken together, I believe these characteristics create an ideal tech culture, one that spurs innovation without leaving scorched earth in its wake. Here are my favorites from each region’s tech culture:

What really separates Silicon Valley from other notable tech hubs is its obsession with challenging the status quo. According to a study, Bay Area firms are four times more likely than other companies to connect their innovation efforts to their broader corporate objectives. Silicon Valley companies don’t want to simply run a business — they want to start a revolution. Using Jim Collins’ vernacular, there’s certainly no shortage of BHAGs (big hairy audacious goals) in the Valley.

Silicon Valley is rife with examples of the innovator’s mindset, but my favorite is Elon Musk. Rather than being satisfied with making incremental improvements to the world, Musk is trying to reinvent public transportation, usher in the era of electric cars, and colonize Mars through commercial space exploration. That kind of audacity can change the world, especially when it’s multiplied across an entire community of technologists.

In my home state, the startup culture rewards the companies that are built to last, not the ones that are first to raise venture capital or get acquired. In this way, Utah is a kind of “anti-Silicon Valley,” a place where companies deliberately bootstrap for a long time and learn to produce revenue and profits before they try to scale. This is why Utah has a disproportionately high number of “unicorn” startups that actually make money.

There is certainly a time and place to “move fast and break things,” as Facebook’s famous mantra encouraged, but even the social network behemoth has taken a more measured stance of late. According to social science, there’s a distinct correlation between high economic performance and cultures of delayed gratification, and that has certainly been born out in the Beehive State. I believe Utah’s cultural emphasis on discipline is key to the state’s economy leading the nation for consecutive years and ranking among the top places for business.

Finding common ground might seem an unlikely trait for a city where the Revolutionary War erupted, but its startup culture is a far cry from its historical roots of tossing tea chests into the harbor. Home to prominent companies such as Zipcar, EMC, Akamai, and Hubspot, Boston’s tech ecosystem enjoys a rare camaraderie in the cutthroat world of startups thanks to an active mentorship community and a pervading belief that a rising tide lifts all boats (even those carrying imperial tea).

Seattle has a 100-year history of technological leadership, dating back to the founding of Boeing in 1916. Today, amid massive growth in its Internet startup scene and the expansion of big players like Amazon, Microsoft, and Google, Seattle is nevertheless taking active steps to maintain economic diversity, believing it to be a key to sustainable prosperity. A major part of this is enacting a $15 minimum wage to level the playing field for living wages and to resist the problem San Francisco has experienced of the tech boom making the city unlivable for anyone who doesn’t command a developer’s salary. Regardless of your views on the minimum wage, the sentiment around trying to encourage a diverse economy just makes sense.

These character traits aren’t all-inclusive, and I could add more about Chicago’s industriousness, Orlando’s sense of community, or the competitive spirit in New York, to name a few. In a vacuum, any of these virtues can become vices, but blended together, they comprise the best aspects of an ideal tech culture.

A culture built on these hallmarks will yield more innovation and a more sustainable future for the global tech community.

Aaron Skonnard is CEO of Pluralsight, which provides online training for technology professionals.