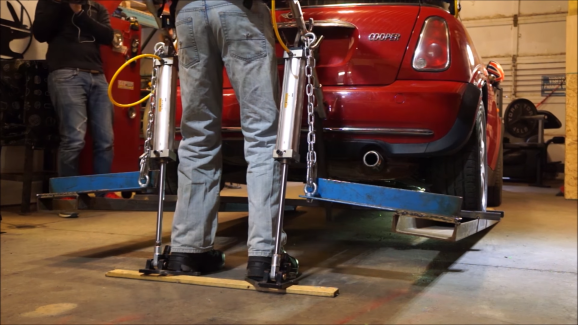 One time, when my car broke down, I spent an hour physically pushing it half a block just so that I could avoid getting a parking ticket. If only I’d had an exoskeleton that let me simply lift it up …

Inventor James Hobson, who calls himself The Hacksmith, is obsessed with exoskeletons. In 2014, inspired by the movie Elysium, The Hacksmith built an upper-body design that let him curl 170lbs. This year, he designed a lower-body solution that lets him lift a car.

More specifically, Hobson’s latest exoskeleton allows him to pick up the back of a Mini Cooper:

The Hacksmith says he is on a quest to build a full-body powered exoskeleton. In fact, according to his post on Hackaday, the mechanical engineer quit his full-time job as a product developer late last year to focus on “exoskeletons, YouTube, and effectively become a ‘Hacker for Hire’.”

And that’s how the project kicked off:

Shortly after that, the German Science show Galileo reached out and asked if they could feature my new exoskeleton on their show — I agreed, and may or may not have promised them a feat of strength I wasn’t even sure I’d be capable of doing — lifting a car.

Like most engineers, I work best under pressure, so with less than a week to go before the interview, we started working on the legs. Getting the strength to lift a car was quite easy. I had a pair of 63mm bore diameter pneumatic cylinders, which at 125PSI are capable of lifting over 800lbs a piece. The fun part was attaching them to my body in order to do it.

If you want to watch how Hobson built his latest project, check out this YouTube playlist.

Again, many will argue that he didn’t lift the car completely off the ground — just the back two wheels. But don’t worry, according to the video, his next goal is to flip the car.