Relcy has incorporated a messaging system into its mobile search engine that it promises will “simplify how you search and share with friends.” The in-app chat feature utilizes a Slack-like command line where you simply type in “@” plus a keyword to pull up specific results, such as a songs, restaurants, movies, TV shows, and celebrity news.

In addition, the company announced the launch of an Android version, but that’ll be an iteration behind, lacking the messaging feature of its iOS counterpart.

“Relcy has already tackled mobile search and brought it into the modern, mobile era. Now, we’ve raised the stakes by integrating messaging to help you and your pals search, share, and take action,” said Rohit Satapathy, the company’s CEO, in a statement.

The addition of a messaging feature lets you chat with your friends like you would on any normal chat service. However, if you’d like to share a movie you think everyone should see this weekend, instead of having to ditch Relcy to go to Fandango or some other app, you can simply input “@Zoolander” and Relcy will pull in the contextual information for that film. You can do the same thing when looking up restaurants, typing “@Tropisueno,” for example, to bring up a card from Yelp. 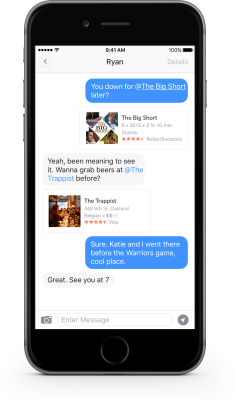 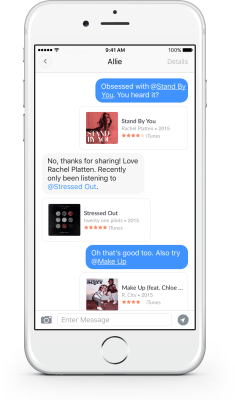 “It integrates the entity experience,” said Relcy’s vice president of product management, Gaurav Mishra. “Based on the launch and feedback we received, a lot of people use the entities (e.g. places, people, TV shows, movies, etc.) in the context of planning an evening out with friends or deciding on what movies to watch.” He continued, explaining that while people discuss their group activities in apps like iMessage or Facebook Messenger, the need for contextual information, like a movie review or theater times, will often force them to abandon that app.

Mishra said that on Relcy “people are going to come and do searches, but it’s important from a platform and technology standpoint to take rich actionable data and take it to a place where users are. Most of them are spending their time communicating with their friends.”

Relcy’s messaging function resembles iMessage in design and capabilities. It gives you the ability to not only manage group chats, but also send specific location information and share search cards. It’s powered by the company’s indexing technology.

Founded in 2013, Relcy has raised $9 million in funding, of which $7.7 million came in 2014 as part of its Series A round, led by Sequoia Capital and Khosla Ventures. Its search engine looks through the content within apps, links them together, and then ranks them according to contextual relevance. Mishra said that the company currently deep links with 150 apps but will be adding more in the future. It recently integrated itself into Slack, launching its own bot.

Having a company tackle the search world isn’t exactly revolutionary, but it’s interesting, given the dominance of Google and, of course, the likes of Yahoo and Bing. However, Relcy thinks it has an edge because it’s thinking about the problem from a mobile perspective, something that providers like Google may not have thought about when initially indexing the Web. Instead of sites and pages, Satapathy, Mishra, and the company are focusing on the myriad of apps someone would have on their phone.

While the service certainly provides some value, Google is almost sure to advance its contributions to mobile and maintain its dominance. As Search Engine Land previously noted, startups like DoAT, Taptu, Expect Labs have all tried to gain traction in this area, but haven’t been successful.

Relcy is free to users, and there aren’t any plans to monetize it anytime soon. “We’re completely focused on our user base and growing user engagement models,” Mishra confirmed. “We haven’t started thinking about monetization, but there are opportunities around actions that lead to completion, installing an app, etc.”

He hopes that the service will “become the place where you start all your intent-driven actions,” while also helping to “determine which apps will help you complete those intentions.”