Popcorn Time, an app for streaming video torrents, just got a new web version: Popcorn Time Online. Unlike other attempts to bring Popcorn Time into the browser, this one is powered by a tool called Torrents Time, which delivers the movies and TV shows via an embedded torrent client. Oh, and the developers have released the code so that anyone can create their own version. Update on February 5: The Pirate Bay and other torrent sites have already adopted the technology.

If Popcorn Time is Hollywood’s worst nightmare, Torrents Time is trying to make sure Hollywood can’t wake up.

Before we dig into the details, it’s important to understand the history.

Sometimes referred to as the “Netflix for Torrents” or even the “Netflix for Pirates,” Popcorn Time is viewed as a major threat to Netflix, and to Hollywood in general. The project started as an open-source BitTorrent client with an included media player. Popcorn Time gained a lot of fame a few years ago, but was abruptly taken down by its developers on March 14, 2014 due to pressure from the Motion Picture Association of America (MPAA).

The project has been forked multiple times by several development teams eager not just to keep the program alive, but to add new features. Popcorntime.io, one of the most popular forks, was shut down by the MPAA on November 3, 2015. 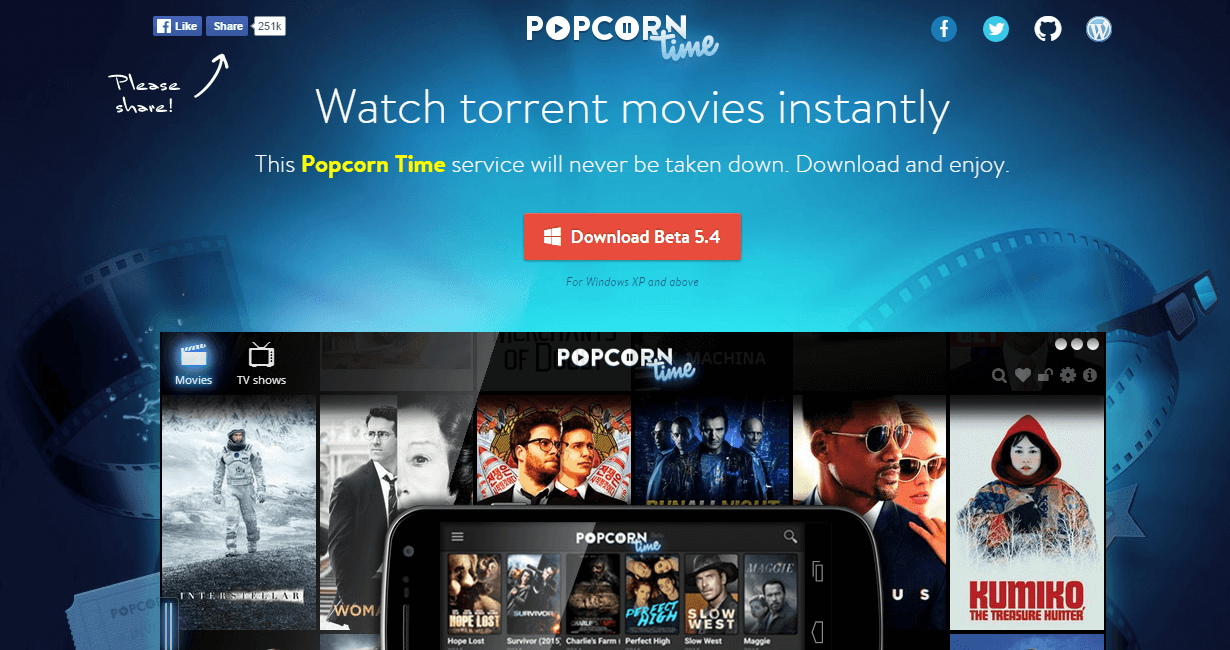 The other popular fork is Popcorn-Time.se. Originally launched under the time4popcorn.eu domain, which has now been suspended, this version has apps for Windows, OS X, Linux, Android, and iOS. It also has VPN support, and even works with Chromecast and the Apple TV. Because of the frequent improvements and updates, and because other domains have been suspended, it is seen as the most popular solution.

But Popcorn Time is still an app. The web-based Popcorn Time Online aims to bring everything directly into the browser.

Aside from adding support for browsers, the creators claim Popcorn Time Online can play “almost every video format.” The existing Popcorn Time versions can’t do this because “many torrents contain unstreamable video formats.”

The quality level of the stream (720p and 1080p are both supported) is indicated on a per-torrent basis. The team expects that the availability of content “will considerably increase from now on.”

The developers see this as “a new era in which, for the first time, any developer could instantly produce a full functioning streaming site enabling all the features Popcorn Time enables as an application, but directly from a browser, with minimal bandwidth requirements.”

Remember when isoHunt let anyone launch their own version of The Pirate Bay? That’s essentially what the Popcorn Time team is hoping to recreate.

Here are the highlight features:

The “instantly” and “in no time” claims aren’t true, from our experience. You do have to wait quite a bit for the movie or TV show of your choice to start playing. When it does start though, it plays without issue.

Torrents Time, and thus Popcorn Time Online, supports Internet Explorer, Chrome, and Firefox on Windows 7 and up as well as OS X 10.8 and up. The developers tell VentureBeat that Safari support is currently being tested and should arrive in a few weeks. Microsoft Edge is currently not supported but may be in the future.

Built-in VPN support is something that the Popcorn-Time.se team added many months back, so it’s not a big surprise to see Torrents Time integrate it into their solution. While using Popcorn Time Online, you are prompted to turn on a VPN: 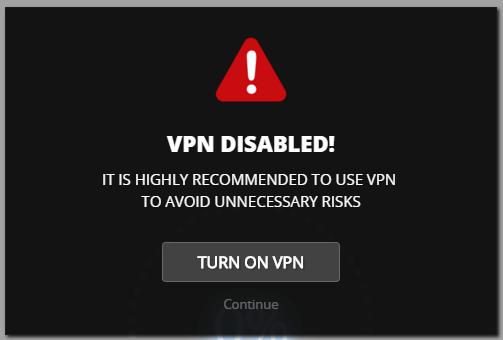 You can watch the movie or TV show without one, but as you can see, a VPN is strongly recommended. Torrents Time currently asks you to get an account with Anonymous VPN, which the team believes is “an excellent shield to the users for a good price.” But they are also leaving the door to other VPN providers for integration, and, of course, users can choose to use their own VPN solution on their computer.

Who are the developers?

The developers tell VentureBeat that “Popcorn Time Online and Torrents Time are separate entities, with separate teams.” Both groups wish to remain anonymous, because they don’t want to put developers from the open-source community “at risk.”

While anyone can contribute, the code that is related directly to the content remains separate and unavailable. That means none of the shared code is proprietary, so any developer can use the project or contribute to it “with minimal risk.”

But the real message the teams want to communicate is: “We’re here to stay!” To further that end, they don’t want to reveal their identities for obvious legal reasons.

“Looking at the sad fate of the .io team, we believe that in today’s environment, maintaining anonymity will ensure that we will all be here for as long as we want to be,” the Popcorn Team explained. “By sticking to anonymity, we are not cowards who hide from righteous content monopolies, but content freedom fighters who respect the law but do not trust the law enforcers to play the law fair.”

Whether you agree with that statement or not, Popcorn Time just made a very bold move. Hollywood, the ball is in your court.