Amazon is planning to open up 400 physical bookstores as the Internet giant takes its battle with brick-and-mortar retailers to the frontline.

The confirmation, according to a report in yesterday’s Wall Street Journal, came from Sandeep Mathrani, CEO of mall operator General Growth Properties. In response to a question about foot-traffic during an earnings call, Mathrani said:

“You’ve got Amazon opening brick-and-mortar bookstores and their goal is to open, as I understand, 300 to 400.”

But could this really be true? Could a company synonymous with killing off long-standing bookstore brands such as Borders really be considering plugging the gap left by these relics from the pre-digital era? Well, it really isn’t all that far-fetched a notion.

Amazon opened its first physical bookstore in Seattle just a few months ago. Last month, the ecommerce titan opened a new staffed UC Berkeley pickup point that also let students check out the latest Amazon-branded gadgets, and revealed plans to open more such centers at other universities this year. 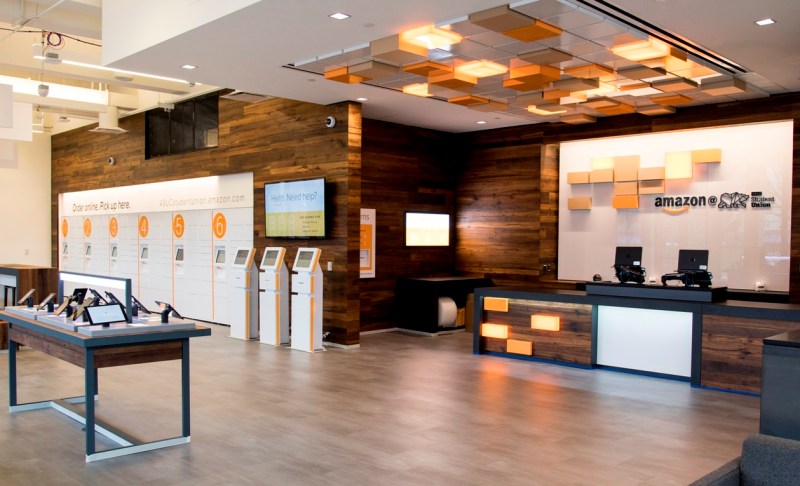 Here’s the thing: As a publicly traded company, Amazon needs to continue growing to add value for its investors, and growth is harder to achieve the bigger it becomes. Amazon has long transcended its roots as an online retailer — for example, it’s also a video-streaming platform competing with Netflix, and a meal-delivery service for restaurants competing with the likes of Uber and Postmates. While it still has room to grow across most of its verticals, the physical retail realm is one that perhaps has the most room for traction.

Barnes & Nobles may be struggling in the U.S., but U.K. bookstore chain Waterstones recently announced its first annual profits since the financial crisis struck, despite almost having gone bankrupt in 2011. Yes, it seems people still like going into stores and browsing for books. And this, coupled with a slowing of the so-called “digital revolution,” has helped some old-school retailers rebound.

“I always believed there would be a natural point of equilibrium with digital reading — that it would overshoot, then come back and settle down,” explained James Daunt, managing director of Waterstones, in an interview with the Guardian. “That made intuitive sense, and that indeed has happened.”

Rather than closing stores, as Barnes & Noble is doing, Waterstones is opening stores. And its success seems to be centered around its core raison d’être — books. Not e-readers, which Waterstones stopped selling last year, but actual books. Meanwhile, Barnes & Noble has already hinted at what it has in store, hosting coloring book events, selling art supplies, and even promoting coding and 3D-printing workshops.

If Amazon really is planning to open as many as 400 brick-and-mortar outlets, this would be a major deal. Barnes & Noble, a company that opened its first bookstore almost a century ago, has around 650 physical outlets remaining across the U.S., so Amazon would be closing in on one of the last remnants of business retained by its rival.

Amazon has another small advantage over Barnes & Noble. With millions of data-points on consumer reading trends from ebooks at its disposal, Amazon is well-informed on what’s hot and what’s not and could stock its shelves accordingly. Indeed, its current outlet in Seattle hints at how Amazon stores could be set up — it has a section for Amazon.com bestsellers, another with books rated 4.8 stars and above, and readers’ reviews from Amazon.com are, naturally, included. It also serves to promote Amazon’s e-reader and tablet devices.

Whether Amazon plans to open big bookstores in shopping malls or niche outlets in university campuses remains to be seen, but it wouldn’t be the first online company to do an about-turn and look to brick-and-mortar stores.

Google launched its first fully branded physical store in London last year, while online grooming subscription service Birchbox also opened its first physical outlet in Manhattan. And when Apple, Samsung, Microsoft and other giants of the digital world are investing heavily in brick-and-mortar stores, you know there must be value in the idea. It’s all about mindshare and being able to cross-promote products, let consumers go hands-on, and offer them expert advice. It’s difficult to replicate that experience in an online environment.

And this leads us to an important final point, one that explains why Amazon could be thinking of opening physical bookstores en masse: Maybe, just maybe, people haven’t become the antisocial hermits many believed the Internet would create. Maybe people actually like going outside, walking into stores, interacting with people and, well, buying things.