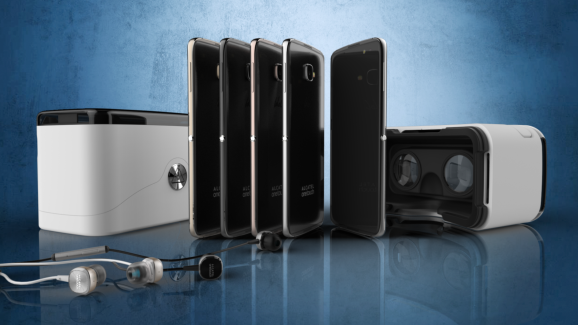 For the fifth largest cellphone brand in North America — up from 13th as recently as 2014 — Alcatel OneTouch isn’t nearly the household name that competitors Huawei and ZTE have become. Part of that has to do with confusion over the brand’s ownership: Despite being founded as a joint venture with France’s Alcatel-Lucent, majority shareholder TCL Corporation of China soon bought its partner out, but retained its name for the purpose of marketing handsets.

To the extent that it has developed some name recognition, the brand is known for offering a good value: low- to mid-range (and, soon enough, high-end) unlocked devices sold for much less than its more established competition. That trend looks to continue into 2016, when we’ll see even more smartphones — as well as tablets and connected home and wearable devices — covering a range of price points, according to a product roadmap shown to VentureBeat.

At the top of the OneTouch lineup sits the Idol sub-brand, currently on its third iteration with the Idol 3, a highly symmetrical 4.7- or 5.5-inch handset that bills itself as “the first reversible smartphone” (thanks to an indifference with respect to orientation). For 2016, TCL will be offering its successors using slightly different nomenclature, as the 5.2-inch Idol 4 and 5.5-inch Idol 4S.

The 4S is undoubtedly the most highly-spec’ed handset that the company has ever sold, with a quad HD AMOLED display and octa-core Snapdragon 652 processor from Qualcomm, as well as 3GB of RAM and 16GB storage (expandable via microSD). The main camera — which can be summoned even from standby with a dedicated “Boom Key” — is composed of a 16-megapixel sensor and f2.0 aperture lens, while the flash-assisted, front-facing selfie cam is capable of 8-megapixel stills.

Perhaps the most interesting aspect of the Idol 4S is how it’s being shipped: in a hard plastic box that doubles as a Google Cardboard-compliant VR viewer (pictured, top). It’s a clever value-add and, at a price point under $400, a good way to move virtual reality downmarket from its lofty Oculus heights.

Besides stepping down the screen size and picture quality — it’s an IPS LCD — the regular Idol 4 also moves into a slightly less powerful Snapdragon 617. Both chips offer eight cores, but the 652 uses the ARM big.LITTLE architecture of four 1.8GHz and four 1.4GHz cores, while all eight of the 617’s cores clock in at 1.5GHz. Graphic capabilities also differ somewhat, being the Adreno 510 and Adreno 405, respectively. Additional differences include its 2GB of RAM and 13-megapixel rear camera — as well as its suggested retail price of $250. Both handsets are scheduled for a May release.

One final note on the top of the range: TCL had been planning a December release of a fashionable iPhone derivative known as the x1. It was to have been an interesting mix of high-minded design (image available here) but supremely average specifications, much like the HTC One A9. However, based on past reports as well as its failure to come to market, the x1 has almost surely been killed — perhaps because it targeted a similar price point as the Idol 4, but with less attractive features.

Moving on to the lineup’s midrange, there are a slew of upcoming handsets, many of which carry the Pop branding; we’ll only look at the most interesting. Just as there are an Idol 4 and 4S, there are also a Pop 4 and a 4S, with reduced specifications in keeping with their sub-$200 price points (Pop 4 will sell for under $100, even). At this point you’re looking at a mix of Mediatek and Qualcomm silicon, with the 4S and all-metal Shine powered by the former, while the Pop 4 and water- and dust-resistant GoPlay 2 (which will ship with active-use headphones) feature the latter.

The standard Pop 4, a 5-inch 720p model with 1GB of RAM, 8GB of storage, and an 8-megapixel / 5-megapixel camera pairing, will be out next month (with a 5.5-inch variant, the Pop 4+, scheduled for April). But the more interesting 4S, with its 5.5-inch 1080p screen, 13-megapixel camera, and 2GB RAM / 16GB ROM memory configuration, isn’t hitting retail until May, along with the two Idol phones.

Rounding out the handsets are the most affordable OneTouch devices, the Mediatek-powered Pixi line. Pixi 4, which first debuted as a $99 6-inch, 720p 3G phone last month, will come in a number of sizes and connectivity options throughout the year. Sizes for the 3G options include 6-inch, 5-inch, 4-inch, and 3.5-inch; TCL is also bringing 4G LTE to this sub-$100 family with a 5-inch variant due out in April for a suggested retail price of $80.

TCL is delving even more heavily into tablets this year, with 8-inch and 10-inch options in the Pop 4 line, and four entry-level, Pixi 4-branded tabs at 6, 7, 8, and 10 inches. Those are all Android-powered devices, but the one which is the most interesting attempts to grab a piece of the convertible Windows 10 market popularized by Microsoft’s Surface lineup — albeit without that device’s trademark pen input. Full details on the entry-level 10.1-inch Plus 10 with LTE and keyboard should come at this month’s Mobile World Congress in Barcelona, with a commercial release to follow in March.