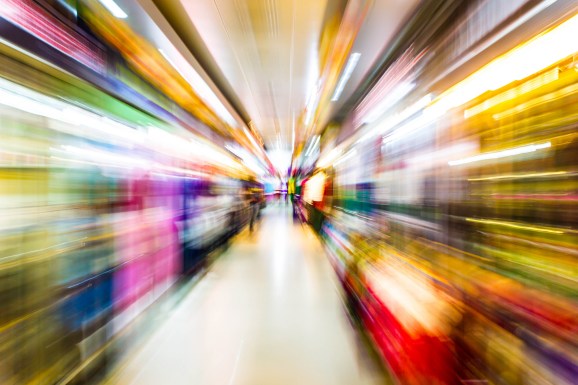 Just when it seemed Twitter was going to take one of its boldest steps toward reinvention ever, it turns out that the company hasn’t ventured as close to the cliff’s edge as we thought.

Today, Twitter officially announced that the company has turned on an algorithm that displays a selection of the most popular or interesting tweets at the top of users’ timelines…if you opt in. The change comes after several days of much wailing and gnashing of teeth by longtime users who feared Twitter would consign their beloved real-time feed to a fiery furnace.

If that sounds a bit overwrought, well, so was the reaction. And the backlash illustrates how Twitter finds itself wearing a straitjacket of its own making.

“Real time” is a deeply flawed and limiting user experience, and it always has been. But for Silicon Valley insiders — engineers and programmers, in particular — it represents a deeply spiritual, romantic notion of what the ever-accelerating information age should be about.

Rivers of data just flowing past us. No intermediaries to tell us what is important and what is not. Just pure, unfiltered, moisty Internet goodness.

It was this sacred belief that seemed threatened last Friday by a report from BuzzFeed claiming Twitter intended to switch to an algorithmic timeline. This sent users into a such a frenzy that they soon had #RIPTwitter trending.

A day later, Twitter CEO Jack Dorsey responded to the hysteria by insisting that Twitter still hearts “real-time” and that it would remain core to the experience.

Now we know that the timeline change is, at best, trivial. Essentially, it’s a modest expansion of Twitter’s “while you were away” feature that has already been in place for some time now. It’s disappointing that Twitter wasn’t ready to make a bolder move away from its real-time roots.

The problem with the real-time experience, from both a design and user perspective, is that it places an enormous burden on most users to paddle furiously through a tidal wave of data in order to find one or two nuggets actually worth their time. That is the kind of work most people simply can’t or won’t do.

Data is fine, but people also want context and insight and entertainment. Most people don’t want everything. They just want the best, without being told that they have to work even harder to get it.

Twitter is perhaps more associated with the idea of real-time information than any other company, probably because it did so much to make the idea fashionable. Within three years of Twitter’s founding, fever for real-time everything gripped Silicon Valley. The “Real-Time Web” got its first Wikipedia article.

“On the real-time web, the Internet is a live and constantly changing entity,” read the first entry on June 15, 2009. “This enhanced ability to search the activities of people via social media raises value of user-generated content.” Such a romantic notion!

As with most over-hyped trends in Silicon Valley, the mania eventually faded into the background. In some cases, the real-time experience got baked into products, like Google’s search engine. In other cases, the wave of so-called real-time startups simply collapsed under the weight of unrealistic expectations.

But, as Dorsey proudly notes, the concept of real time remains core to the Twitter experience after more than 10 years. Yet, watching my own account each day is all the reminder I need of real time’s limitations.

Let’s say I open my feed on Twitter.com in a desktop browser. I walk away and come back 10 minutes later. It tells me I’ve missed 202 tweets. And this is early afternoon in Europe, so most people I follow aren’t even online.

What am I supposed to do about 202 tweets? Or the thousands and thousands more that I never see during the day? They’re all pretty useless. Did any of them matter? I’ll most likely never know. Or care.

Twitter’s topic pages are an improvement, but only just a bit. Let’s say I’m interested in the New Hampshire Primary results, an event tailor-made for real-time coverage. For Twitter, I have to know about hashtags and then search for #NewHampshirePrimary.

The “Top” category tab is somewhat useful. But if I switch to the “Live” tab, the full-on real-time experience, it’s pretty much just pure noise. It’s either nonsense, or people tweeting links to the same news stories or results over and over.

Twitter’s trending sidebar is more of an invitation to solve a mystery than it is a feature. If you want to know why #GreetTheAliensIn5Words is the top trending topic in the U.S. today, you’re going to have to scroll through a lot of tweets to figure it out.

All this groping around for meaning on Twitter is in stark contrast to Facebook, which understands better how to use design and algorithms to help people have a better experience.

Every now and then, someone in my Facebook feed complains about this, venting that Facebook is hiding stuff from them and wishing they could see their whole feed. But even if you think you want this, you don’t. If every update from every friend was actually appearing in real time, the important ones would get pushed out of sight unless you stared at Facebook 20 hours a day.

Snapchat also understands this. Snapchat’s “Live Stories” has a growing team of more than 40 curators who scour users’ snaps, pick the best ones, and assemble them into stories. According to Re/Code, as of last summer, the handful of Live Stories Snapchat posts each days were drawing an average of 20 million viewers per day.

Twitter belatedly came at this approach by launching “Moments” last October in the U.S. Like Snapchat, it featured a team curating the best tweets to create a more useful experience. I’m eager to see how it’s going, but it’s not yet available where I live in France either on the Web or on the mobile app.

This is the kind of thing that Twitter needs to do more often (and more quickly).

Instead, for now, Twitter seems incapable of escaping the gravity of the real time fetish it did so much to define. Its longtime users, with pitchforks ever at the ready, have become the biggest enemies of change.

It seems a confrontation with its core users is inevitable if Twitter wants to evolve and grow. But for now, with today’s announcements, the company has opted to kick that can a little further down the road.