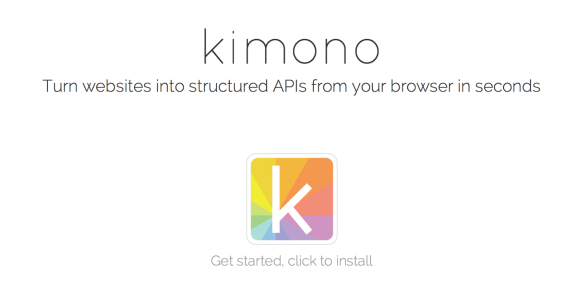 Kimono Labs has been acquired by Palantir in a move that will see the team behind the data collection service absorbed into the secretive data analytics platform. As a result of the deal, the Y Combinator startup will shutter its service on February 29, 2016. Data can be retrieved from Kimono Labs’ site until then, and there’s a 30-day window to import APIs created from the service up to March 31.

Financial terms of the deal were not immediately disclosed.

To continue managing APIs you’ve created within Kimono Labs, you’ll have to use the company’s desktop application, which is free. Although continued active development on the service is being stopped, there are mechanisms in place to deploy critical patches, the company wrote in the Frequently Asked Questions section of its website. “The Mac OS X version supports automatic updates: when new versions are available, they will be downloaded automatically and you will be prompted to quit and install. The Windows version will notify you when an update is available after which you can visit the site and download and install the new version.”

This sounds like a thought-out plan, except when you try to download the desktop option for Mac or Windows, Kimono Labs lists them as “coming soon” (Update: the Mac OS X version is now available for download).In fact, the only thing remotely available is a Chrome extension.

On March 31, 2016, Kimono Labs said it will be securely purging all user data, including names, email addresses, passwords, and APIs from its servers. Palantir will not have access to this data, the startup promised.

Founded by Pratap Ranade and Ryan Rowe, Kimono Labs set out as a “scraping as a service” platform to assist developers in easily creating APIs to share data. It was a part of the Winter 2014 Y Combinator class and promised to turn “a complex website into an API in under 1 minute right from your web browser without writing a line of code.”

The company revealed that it is now being used by more than 125,000 developers, data scientists, and businesses, all looking to find structured data.

Kimono Labs explained that in the two years since launching, it wasn’t able to have the impact that it wanted, and that the acquisition by Palantir will give the team “unmatched support, resources, and the ability to work on things we could not tackle alone as a small startup.”

Update as of Monday at 4:25 p.m.: Pratap Ranade told VentureBeat that Kimono Labs has updated its desktop app for Mac OS X and it is “available for download and immediate use from our website as of now.” This post has been updated to reference this change.