Chip maker Advanced Micro Devices and the news organization Associated Press are teaming up to collaborate on “virtual reality journalism.”

That means AP will use AMD technology to create media that can be viewed in virtual reality with VR headsets such as the Oculus Rift and the HTC Vive. The collaboration shows that the immersiveness of VR could profoundly affect the way that news is delivered to increasingly tech-savvy audiences. So far, VR has been viewed as a new platform that will feature games and entertainment. But for VR to live up to the expectation of being a $30 billion market by 2020 (as predicted by tech advisor Digi-Capital), usage will have to spread beyond those sectors.

Both the 170-year-old AP and AMD believe that VR will change the media industry by bringing “humanity’s defining moments to life.”

“Our belief is that content is king, and we are going to do everything possible to make it as easy as possible for developers to create great content,” said AMD’s Sasa Marinkovic, head of VR marketing at AMD, in a call with the press. 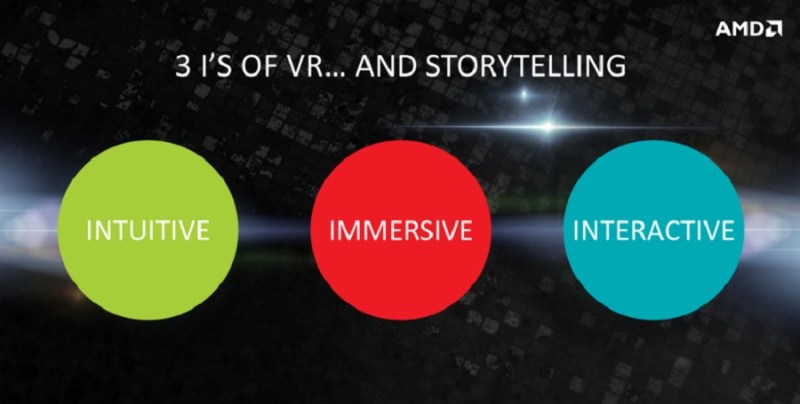 Above: How to tell a story in VR

The companies are creating a virtual reality experience channel as the home for next-generation journalism. AP will leverage AMD’s Radeon graphics technology to render lifelike VR environments, built around news and documentaries. AMD will provide the hardware platforms, software technology, and VR expertise to support AP’s journalism in VR and 360 video. The companies said that VR journalism could produce “truly captivating and experiential news that can put all of us at the heart of the events that shape our world.”

The companies added, “On the scene and in the moment, virtual reality can free us to learn and explore another time and place as if we were there. From the shouts and cries to the cheers and parades, VR journalism presents a rare opportunity to experience the world seemingly from within.” Filmmakers are already experimenting with 360-degree VR videos that allow someone wearing VR headsets to look in any direction to see video action. The same kind of thing could happen with VR journalism or documentaries.

“VR can help people achieve a visceral experience of news and documentaries so they can feel what it’s like to actually be there,” said Raja Koduri, senior vice president and chief architect of AMD’s Radeon Technologies Group, in a statement. “The technology can enable us to figuratively walk in another’s shoes, leading to greater understanding and empathy.”

2016 is widely expected to be the year VR comes to life, with the launch of Facebook’s Oculus Rift on March 28 and HTC’s Vive headset in April. Samsung launched its mobile VR headset, the Gear VR, in the fall of 2015. AP editors will retain control over the editorial content presented via the new AP virtual reality channel, powered by AMD Radeon graphics, which debuts today at AP’s big story site.

Paul Cheung, director of interactive and news production at Associated Press, said in a press call, “The company has a rich history of working with emerging technology to bring the audience much closer to the news. Back in 1899, the AP used the wireless telegraph to transmit the results of the America’s Cup yacht race. This was the first news test of what would come to be called radio. And back in the 1980s, the first digital news picture was made by an AP photographer.”

“Already with virtual reality and 360, you see there is a lot of excitement with the news media,” Cheung said.

He said AP had been experimenting with VR since August, and now it is looking at the whole range of experiences for VR, from active to passive. It explored, for instance, a first-class seat on Singapore Airlines. Normally, that costs $17,000 to experience. 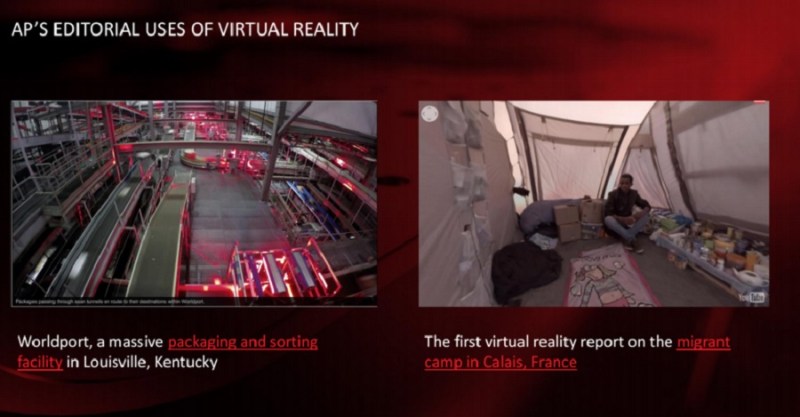 Above: AP’s experiments in VR.