It’s been a long time coming, but video-streaming platform Vimeo has finally added Chromecast support to its Android app — one year after the iOS incarnation. 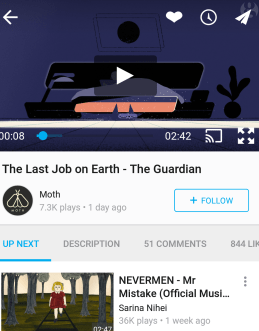 Above: Vimeo for Android

Vimeo may exist in the shadows of YouTube, but it has 30 million registered members and claims that almost 200 million people arrive on its site each month. It has also sought to differentiate itself from YouTube by targeting creatives with a platform that lets them sell or rent their original content, though YouTube is starting to make a bigger play in that space too.

Besides its native mobile apps and website, Vimeo is also available on Apple TV, smart TVs, Roku, games consoles, and Amazon Fire TV. Chromecast for Android was a glaring omission in its arsenal before today.

Support for Google’s streaming dongle had been rumored since the launch of Chromecast back in 2013, but while other big-name apps added support, Vimeo took its time. Naturally, the matter was made worse by the fact that only those on iOS have benefitted for the past 12 months.

All Vimeo can muster is a “we appreciate your patience, pals!” in the release notes. But as Vimeo itself concedes, it is, indeed, better late than never.