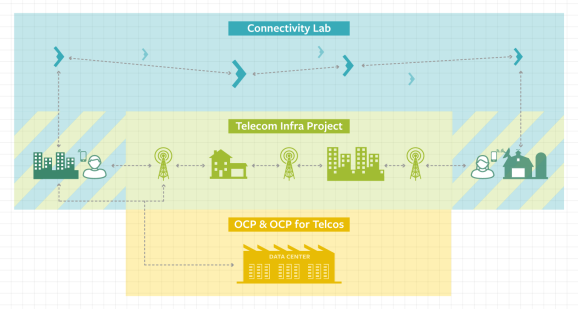 A diagram showing the parts of the Facebook-led Telecom Infra Project (TIP) alongside Facebook's Connectivity Labs and the Facebook-initiated Open Compute Project (OCP).

At the 2016 Mobile World Congress conference in Barcelona today, Facebook announced the formation of the Telecom Infra Project (TIP), an effort that resembles the Open Compute Project (OCP) that Facebook kicked off five years ago, but which is narrowly focused on the development of new telecommunications networking hardware.

This isn’t just another internal effort on the part of Facebook. As it did with the Open Compute Project, Facebook is announcing TIP with a bunch of partners, including telcos like Deutsche Telekom of Germany, BT subsidiary EE of the United Kingdom, Globe Telecom of the Philippines, and SK Telecom of South Korea.

“Every day, more people and devices around the world are coming online, and it’s becoming easier to share data-intensive experiences like video and virtual reality,” Jay Parikh, Facebook’s global head of engineering and infrastructure wrote in a blog post. “Scaling traditional telecom infrastructure to meet this global data challenge is not moving as fast as people need. We know there isn’t a sole solution for this, and no single company can tackle the problem alone.”

Some participants in the new program, like Intel, Nokia, and Facebook itself, will share designs, and the telco participants can go out and use technology based on those designs. At the start, the group’s work will focus on access, backhaul, and core/management, Parikh wrote.

The creation of new hardware could help telcos connect more people with greater efficiency and provide better connections to those who are already connected. That’s just good business for the telcos. And of course with more people connecting and getting access to more content, it’s more likely that Facebook will pick up millions more users and retain existing ones.

Facebook is already engaged in efforts to bring Internet to more people around the globe, with its Aquila drone and its partnership with French satellite company Eutelsat Communications. It also has the controversial Free Basics app for delivering Facebook and other basic Internet services to developing markets.

But the infrastructure that telcos use to provide their services is different from those that web services and other general-purpose applications have traditionally relied upon. The OCP has brought openness to cutting-edge designs for multiple generations of servers, storage, and networking equipment that companies other than Facebook have experimented with or even deployed to improve their own operations. The TIP won’t do exactly the same thing, but it could have just as much of an effect around the world, and the work could end up making a difference to the telcos’ hundreds of millions of end users who pay for Internet access month after month.

For more on TIP, check out the program’s new website.