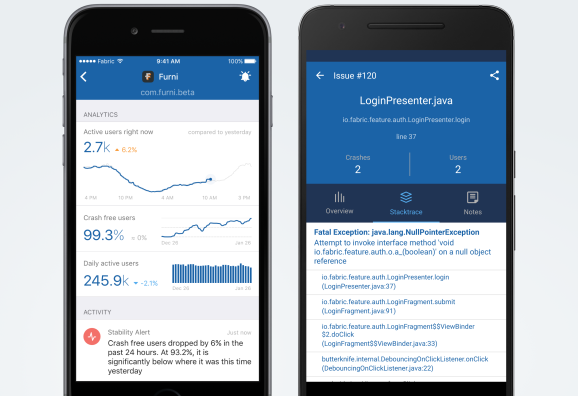 Twitter today is announcing the availability of a mobile app for its Fabric mobile development toolkit. The app is immediately available on both iOS and Android.

No longer will app developers need to rely on their desktops and laptops in order to check on the health of their apps, find out the number of monthly active users or the average length of users’ sessions, or discover crashes affecting certain users. Now, after five months of development at Twitter, there’s finally a mobile app for that.

It’s the sort of thing could be particularly helpful during off hours. For example, in the case of run-tracking app Runkeeper, users are most active on weekends, but that’s “exactly the time when most of [the] team isn’t in the office,” Twitter product manager Meekal Bajaj told VentureBeat in an interview.

The big picture here is that Twitter is making its developer tools more useful in more situations. But it’s not as if Twitter is assuming Fabric will be the definitive go-to supplier of developer tools. “We have definitely seen people who have PagerDuty find unique value in this,” Bajaj said. Plus, Fabric is becoming less of a standalone tool. In October Twitter announced that Fabric integrates with other developer tools, including Amazon Web Services (AWS), Optimizely, and Stripe.

Not that Fabric is small — more than 1.6 billion devices currently use some part of Fabric, and more than 225,000 developers started using it within one year of it becoming available, Bajaj said.

Rather than force users of the new app to set up a bunch of filters, Fabric on iOS and Android has certain dashboards ready to go from the beginning. And it can automatically display the top issues worth addressing. “It’s something we see from developers all the time: ‘What could I address today that would actually help with my app’s stability?'” Bajaj said.

Rather than send emails about issues, the app, naturally, uses push notifications about alerts. And anyway, email alerts can get buried, Bajaj said.

“When you get a push notification from us, we’ll give you everything you need to know: full stacktraces, number of affected users, and breakdown of devices and platforms — all in real time. That way, even before you pull up your laptop, you know where to look for a bug, who on your team to reach out to and how it could affect your metrics,” Bajaj wrote in a blog post on the new app. Users can adjust the frequency of notifications and even select a mute button if they so choose.

Users can read and write comments on issues right from within the mobile app.

If you’ve got a Mac next to you when you find an issue you want to dig into within the Fabric mobile app, you can easily look up the issue in greater detail on your computer thanks to the Continuity feature, Bajaj said.

In the future, the team might want to create some kind of special kind of user interface that will come up following the launch of a new app, Bajaj said.

The app is available for free through Apple’s App Store and the Google Play Store for all developers who currently use Fabric. The app also works with the Apple Watch and Android Wear.