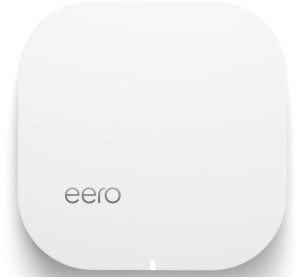 If he were alive today, the towering figure of mid-century architecture and furniture design would be thrilled by his namesake, the eero –a gleaming white, beautifully curved, 4.75-inch square with a 1.26-inch high-domed top — Wi-Fi router.

As an industrial product, the eero looks perfect in every way, even if, at first glance, the device seems to be just another example of the current fad to make gadgets mimic the iPod’s signature look. Call it “Apple chic.” But that’s not the case here. Eero, a San Francisco-based startup has instead created a singular object that rises above those offered by Apple and its imitators.

As a design category, the Wi-Fi router has long been ripe for disruption. Consider the standard device: a rectangular block of black, silver, or blue plastic (sometimes even all three colors, yuck!), with a row of yellow or green blinking lights, winged with a pair of stubby antennas and tethered to a boxy, black power supply-cum-plug that invariably dangles from your outlet with as much grace as an elephant in figure skates. 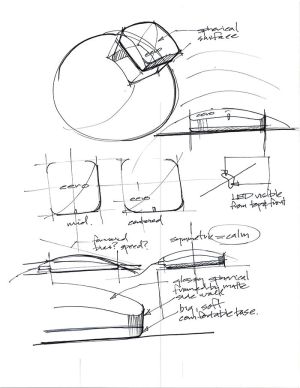 Above: “Industrial designer Fred Bould pored over every detail so the product would coalesce with modern interiors.”

In the hands of eero’s cofounders, Nate Hardison, Amos Schallich, and Nick Weaver, however, the humble router is transformed into an object of desire. “If you look at the top, we made this really nice glossy finish. It reflects light nicely,” said Weaver, the company’s CEO, “but on the sides we put this matte finish,  which absorbs the color of the surface it’s on, and adds some more warmth to the device. But we didn’t stop there, even our power supply — most companies ship, like, a big black brick. Ours actually follows the exact same proportions … same finishes, the glossy top, matte sides. We really focused on every little detail and designed everything from scratch.”

The cofounders’ pursuit of perfection is backed by the creative genius of advisor Jon “the podfather” Rubenstein of Apple and Palm fame, and by Fred Bould, whose design credits include Nest, GoPro, and Roku.

In many ways, the eero conforms to the dictates of design heavyweight John Maeda. In his Laws of Simplicity, Maeda addressed the paradox of how the things we want to be the most simple to use are those that are often the most complex and fulfill the most complicated need. (Maeda penned this slim volume in 2006 just as the Apple iPod was taking off.) His first law is “Reduce,” which he summarizes: “The simplest way to achieve simplicity is through thoughtful reduction.” It’s a rule lost on the manufacturers of the blinking, rabbit-ear-wearing Wi-Fi router common to most homes.

For all its simplicity, the eero also screams practicality. According to Weaver, the router’s domed top serves two purposes: It’s coated with a beautiful sheen to reflect light, and its curved top keeps it from being used as a drink coaster.”

Saarinen, of course, is famous for emboldening design with breathtaking, soaring curves, whether in the architecture of the TWA Flight Center at New York’s John F. Kennedy Airport or the St. Louis Arch, or in the creation of eponymous furniture like the Womb Chair and his gravity-defying,oval marble dining tables. But Weaver also has a personal connection to the famous designer.

Eero’s CEO explained that Saarinen helped design the elementary school he attended, Crow Island Elementary School, located outside Chicago.  “I always wanted to name our company after him,” Weaver said. The building is on the U.S. National Register of Historic Places and obviously made a lasting impression on the young boy. And if you happen to purchase one of these impeccable devices, you’ll be glad it did.

For more coverage of the eero router, read the VentureBeat Review: “Eero drastically improved my home Wi-Fi in about 10 minutes.“