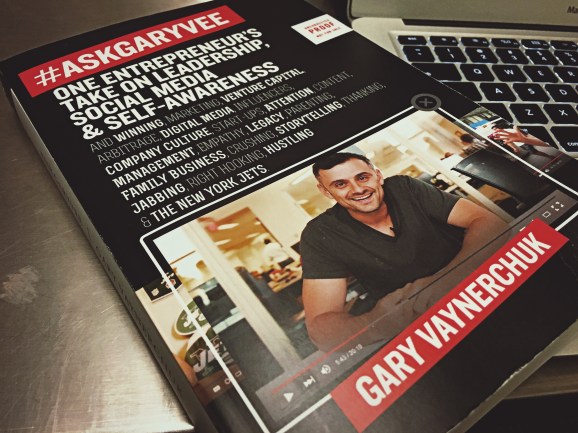 Ten years ago, Gary Vaynerchuk took a Flip cam and created the first episode of what would eventually become a popular online show called Wine Library TV. In the time since, he has built not one but two multi-million dollar companies. That, along with his trademark “hustle” and charisma, means people tend to seek his advice about entrepreneurship, leadership, attaining social media prowess, and more.

There’s only so much time in the day to respond to questions, even for Vaynerchuk, who seems to need little sleep, if his “DailyVee” video blog is any indication. That’s why he has penned a new book, entitled #AskGaryVee: One Entrepreneur’s Take on Leadership, Social Media, and Self-Awareness. It’s a collection of answers to nearly 370 questions he’s received, similar to those you might see during a Reddit ‘Ask Me Anything’ session. Vaynerchuk wants this book to provide “practical, tactical information” that an entrepreneur or business person can quickly apply, adapting it to their needs.

For anyone looking for a “Getting Started” book, this publication is going to be your go-to guide. Think about this: For about $17.99, you’re getting advice about how to start a business and adapt it to the rapidly changing media landscape from someone who charges brands thousands of dollars for a consultation.

If you’re familiar with Vaynerchuk’s “AskGaryVee” video podcast, then you’ll have a pretty good idea what to expect from #AskGaryVee. It’s a print version of questions that are answered throughout the show’s first 157-plus episodes but organized in a way that doesn’t require you to watch every video. Some of the topics covered include how to deal with platforms, Facebook advertising, influencer marketing, getting started, the value of education, leadership, investing, public speaking, sports, and wine.

As Vaynerchuck’s fourth book, #AskGaryVee has a similar feel to his earlier works: Crush It, The Thank You Economy, and Jab, Jab, Jab, Right Hook. It’s an advice book that gets you to think about ways to do things, rather than dictating how you should do them. The nearly 350-page tome is designed with what Vaynerchuck calls a “360-degree entrepreneurial mindset.” He has said that he has “zero interest” in telling people how to do things, preferring to share his own experiences — offering a guiding light, if you will, that gives entrepreneurs a point of reference from which they can navigate.

Looking through the answers in #AskGaryVee, it’s difficult to not hear them read aloud by Vaynerchuk himself. He enjoys feedback from his fans and says at one point, “Comments are my oxygen.” His responses aren’t sugar-coated, nor does the book feel “templated,” even though some of the questions are fairly standard. What you’ll find are the very real and boisterous thoughts you’d expect from Veynerchuck when he’s, as he might say “pumped up.” Case in point, here’s an answer Vaynerchuk gave to a 14-year-old fan who asked how to become an entrepreneur:

Wanting to be an entrepreneur and being one are two different things. If I were you, I’d sell the shirt off your back to another kid. I’d find some rocks and sell them to a nine-year-old girl. The best way to become an entrepreneur is to behave like one. Entrepreneurs sell, so start a business or start selling things….There’s no reading about this stuff — only doing. Drop this book or Kindle right now, kid, and look around, pick something up, and post it on eBay…Go!

This book isn’t geared solely to entrepreneurs — it doesn’t train you in the specific art of selling or tell you how to build something. Instead, Vaynerchuk gives general insights into a wide range of topics. There are questions and answers about what you should look for in a cofounder; how Vaynerchuk avoids procrastination; whether he’s a morning person; dealing with burnout; advice to a salesperson on how to adapt to social media; how to use Facebook advertising; working with platforms such as Instagram, Pinterest, Meerkat, Twitter, and Snapchat; metrics; company culture; working with friends; and more.

Vaynerchuk is certainly not short on accomplishments. Along with his successful wine business, he’s also the cofounder of VaynerMedia, a company that consults with brands like Budweiser, Sonic, Dove, MasterCard, and Mountain Dew to implement non-traditional marketing campaigns. He’s also a venture capitalist, having invested in companies like Twitter, Tumblr, Wildfire, Birchbox, and Uber, either personally or through his partnership in the $25 million VayerRSE fund.

The book can perhaps be summed up this way: If you ever had the opportunity to interview someone who was a proven leader and successful entrepreneur, what would you ask them? Well, #AskGaryVee takes all those questions, filtered through Vaynerchuk’s very personal point of view and years of experience, and asks you to come up with your own solutions. The rest is up to you.

#AskGaryVee: One Entrepreneur’s Take on Leadership, Social Media, and Self-Awareness goes on sale March 8 and is available on Amazon.