Truecaller has announced plans to merge two of its flagship apps into one as part of the Swedish startup’s efforts to create the ultimate phone call management app.

If you’re new to Truecaller, the Stockholm-based company has built a solid reputation over the past seven years with its crowdsourced approach to helping users flag rogue callers, identify unknown telephone numbers, and automatically block those deemed as “spam.” Besides its eponymous Truecaller app, which has claimed more than 200 million downloads, the company also rolled out a separate Truedialer app on Android and Windows Phone back in 2014, one that automatically adds names and photos to unknown numbers in your call history.

Now, Truecaller is looking to gradually phase out Truedialer as a standalone app, a process that begins with the migration of its key features into the main Truecaller app. 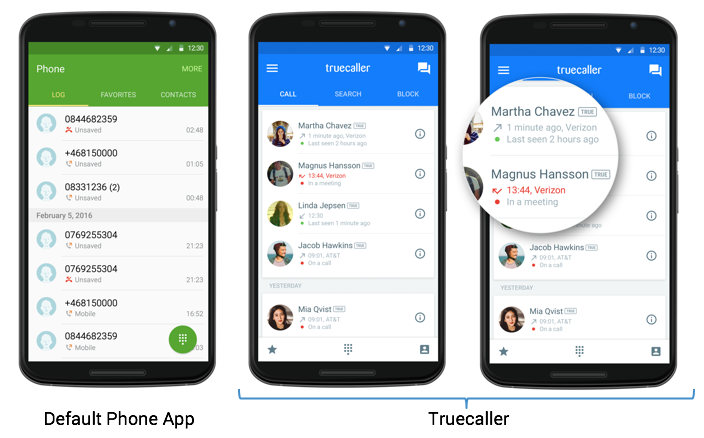 Above: Default Phone App vs. Truecaller

Moving forward, the Truecaller app itself will now offer the “smart call history” feature, as well as offering “availability” — essentially a Skype-like feature that shows you if your friends and contacts are available before you call them. It’s worth noting here that this feature will only work if your friends also have Truecaller installed, however, moving the feature into the main Truecaller app should help it reach more people.

Perhaps the most obvious change with the new Truecaller update will be the built-in dialer. This means you can also now make telephone calls directly within Truecaller, though this is an entirely optional feature — you can still use whichever dialer you wish.

There are other spam-blocking caller ID apps out there, including Facebook’s Hello app for Android, which launched last year in the U.S. — it, too, has a dialer built in. But given that Truecaller has emerged as the most-recognized brand in this space, integrating a dialer directly into its app makes sense.

Today’s news comes three weeks after Truecaller launched its first-ever software development kit (SDK), which lets third-party apps onboard new users with their existing Truecaller profile and associated verified phone number. Now, Truecaller is clearly looking to consolidate and get all its users under the same umbrella, though VentureBeat is told there are no plans to integrate the company’s third app — Truemessenger — into the main mix.

The latest update begins its rollout on Android from today, though it could be a few weeks before it hits all users around the world. Over time, existing Truedialer users will be “upgraded” to the Truecaller app.