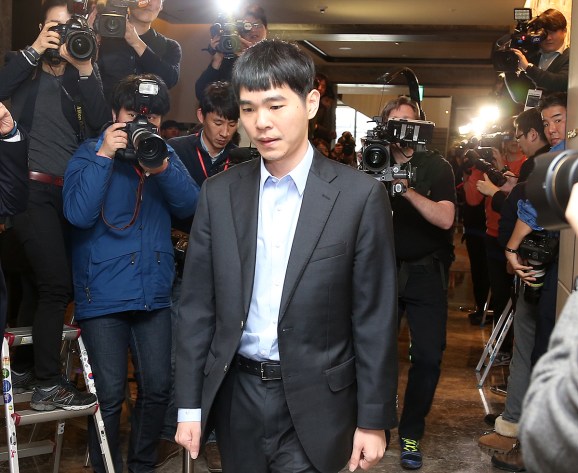 Go player Lee Sedol at the third game in a five-game match against Google's AlphaGo Go program in Seoul on March 12.

Lee Sedol, whom many people believe to be the top player of the ancient Chinese board game Go, put up a real fight in each of the three games against Google’s AlphaGo artificial intelligence (AI) program, but, in the end, the machine won the match. And for that, Lee Sedol is sorry.

In a press conference after the third game of the match, Sedol made unscripted remarks that clearly conveyed his regret:

I don’t know how to start or what to say today, but I think I would have to express my apologies first. I should have shown a better result, a better outcome, and better content in terms of the game played, and I do apologize for not being able to satisfy a lot of people’s expectations. I kind of felt powerless. If I look back on the three matches, the first one, even if I were to go back and redo the first match, I think that I would not have been able to win, because I at that time misjudged the capabilities of AlphaGo. The second match, I think, would have been the make or break.

If you look at the beginning of the second match, the game did flow the way that I have intended, and there were a [number of opportunities] which I admittedly missed. Looking at the third match, yes, I do have extensive experience in terms of playing the game of Go, but there was never a case as this as such that I felt this amount of pressure. So I was incapable of overcoming the amount of pressure that I was experiencing.

And lastly, since I lost the third match, there is now a clear winner. However, when it comes to human beings, there is a psychological aspect that one has to also think about. So as I play the fourth and fifth match, I do ask that you continue to show interest and follow what happens.

The sentiment Sedol expressed is particularly meaningful because it highlights how major this accomplishment is in the world of AI. Sure, Google pulled off a serious coup when AlphaGo beat the French Go player Fan Hui, but Go is more popular in South Korea, where Sedol is from, than it is in France. Sedol was always the player to beat if Google wanted to boast about the capabilities of its artificial intelligence. Now Google has done that, at the expense of Sedol, who has garnered great international respect by winning many titles in the past several years. Naturally, Sedol had wanted to win — for the sake of his personal reputation, certainly, but beyond that, as a representative of the intellectual powers of humans, in general.

You can watch the third game and the press conference at the end of the video below.