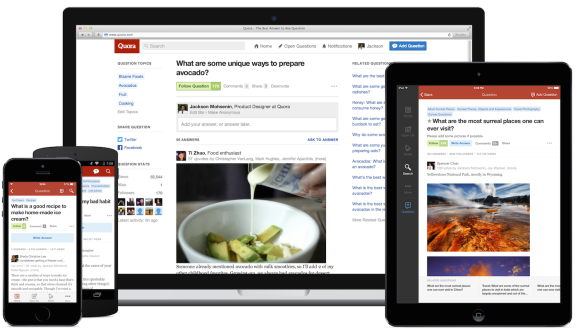 Quora revealed today that it is seeing 100 million monthly unique visitors to its Q&A social network, an increase of 22 percent from January, when it reported having 80 million.

The company declined to comment on where most of the growth is coming from, but the increase could be attributed in part to the release of a number of updates. These include Quora’s “Ask Me Anything” service, called Writing Sessions; Knowledge Prizes, which are incentives for experts to answer questions; a new editor to enable users to create more visible and organized answers; and more.

Quora, which is a social network centered around the idea of promoting ideas and knowledge, has seen some renowned individuals participate in conversations on its site, including venture capitalists Vinod Khosla and Keith Rabois, Facebook’s Sheryl Sandberg, former Secretary of State and presidential candidate Hillary Clinton, and President Barack Obama.

Quora CEO Adam D’Angelo said that he’s not paying much attention to the number of monthly unique visitors: “We usually optimize for quality and that comes with a tradeoff against volume.” Even so, the fact that more people are visiting the site each month indicates a growing interest in the conversations taking place. But the question of how active people are on Quora still remains. Are there more people asking and responding to questions or are most visitors simply reading answers?