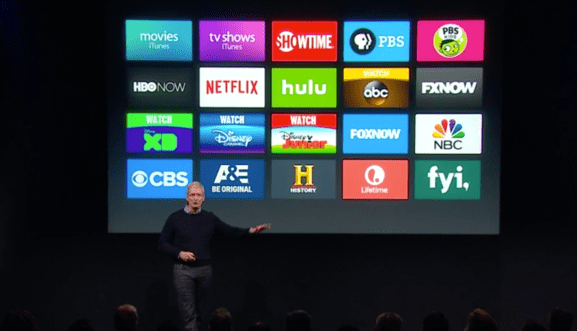 You know you’re at an Apple event when the audience applauds raucously after the person on stage announces…woven nylon watch bands.

I mean, people, it’s a watch band. And it’s definitely not even the first WOVEN NYLON WATCH BAND.

This highlights the awkward place where Apple and its legions of fans and journalists now find themselves. Apple has done such a masterful job over the years of making each event feel like it’s the Second Coming that expectations each time an invitation goes out are stratospherically high.

It is then, perennially, a challenge for Apple to deliver against those expectations. Amazingly, it has done so pretty consistently for about a decade. But it’s quite likely that streak is ending, if it hasn’t already with yesterday’s event.

John Gruber, the Apple observer who writes at the Daring Fireball blog, argues that the company did its best to manage expectations around the event by holding it at the smallish town hall on its campus.

“I detect an undercurrent of ‘That’s it?’ in the collective response to today’s event, but I’m not sure what Apple could have done differently,” he wrote. “A new iPhone and a new iPad demand a proper on-stage unveiling. That the event was held in Town Hall and not a larger venue was a signal that Apple wasn’t going to unveil anything spectacular. It’s not reasonable to expect the spectacular from every single event.”

True. Though I’m not sure that any product demands a “proper on-stage unveiling” unless you’re announcing that you’ve cured cancer. Only in the Apple Universe does this logic apply. But it is a way of thinking that has been encouraged by Apple itself, as it tries to turn each event into something grander than it really is (and mostly succeeds). It’s hard to believe that, in this case, a press release or two wouldn’t have been enough.

But I understand the temptation. Getting an hour of undivided attention from the media and from fans around the world who tune in via the live stream has almost unequalled marketing value. Why pass on that, even if the new products are only incrementally different?

Still, as the announcements unfolded yesterday, it was hard to mask the fact that the new stuff was pretty modest. The event seemed more branding-oriented than product-oriented. Apple got to talk about its stance against the FBI, its environmental work, and the progress with the research applications of its Research Kit.

Many other parts felt like executives were straining, trying too hard. Like Phil Schiller’s pitch to get iPad users to upgrade-upgrade-upgrade and his shock that 600 million people still use PCs more than 5 years old. LOL. If your sales pitch is, “Gee, people are dumb!” then perhaps its time to rethink your sales pitch. (As an aside: One could just as easily look at that stat and think: “Wow, Windows PCs sure are durable.”)

But the “new” iPhone SE is just an update to the iPhone 5s. And the new iPad Pro is just an iPad of a different size. Solid, no doubt. Better than just about anything else out there. Probably. Yet, these are tweaks rather than breakthroughs.

Of course, journalists love to ask, with the same regularity and in a somewhat demanding tone, “Can Apple excite us again?” Part of that is the simple, human desire to be wowed. And no company has done more over the past decade to wow us than Apple. But part of it is also a simple reality: Nothing consistently drives Internet traffic like an Apple event.

So, there is a symbiotic relationship around these moments. There is an ecosystem of sorts between Apple, fans, and journalists that has come to rely on this announcements.

This low-adrenaline show also has the misfortune to follow a year in which Apple really did release a wide range of new products: Apple Watch, revamped Apple TV, new Apple Music streaming service, iPad Pro. But even in the ever-busy Apple rumor mill that includes talk of driverless cars or speculation about whether Apple might be interested in virtual reality, there likely is nothing on the near-term horizon that promises to plunge the company into a new category of technology.

Toward the end of Apple’s hour-long informercial yesterday, Cook noted that this would likely be the last such event held at the town hall on the company’s current campus. By 2017, Cook said the company hopes to be holding such events on its new spaceship campus a couple of miles away.

The rendering he showed promises a spectacular, glass-enveloped structure that will no doubt dazzle all first-time visitors who are fortunate enough to be invited to attend. The question in the coming years is whether anything that will be presented on the stage inside can generate the same thrills as the building.