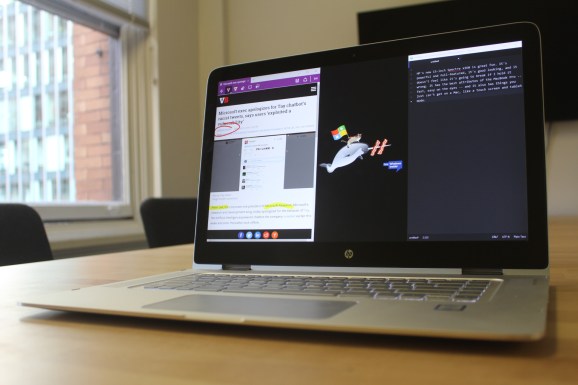 HP’s new 15-inch Spectre x360 convertible laptop is great fun. It’s powerful and full-featured, it’s good-looking, and it doesn’t feel like it’s going to break if I hold it wrong. It has the best attributes of the MacBook Pro — fast, easy on the eyes — and it also has things you just can’t get on a Mac, like a touch screen and tablet mode.

In terms of what’s new, it’s the 15.6-inch, 3840-by-2160 display. The Universal HD version I’ve been testing is gorgeous and plenty bright. There’s much more real estate than on the 13.3-inch version I used last year to familiarize myself with Windows 10. And yet, given the larger screen size, the device is remarkably light (four pounds) and thin (0.63 inches). And I prefer the good old HP logo that’s flush with the rest of the natural silver casing on the back to the sharp pop-out “HEWLETT PACKARD” lettering on last year’s model.

As Windows machines go, this one looks and feels more impressive than Dell’s highly reviewed XPS 15, which doesn’t come with touch out of the box and can’t do tablet mode, though it can make up for that with a discrete GPU. Microsoft’s Surface Book is cool, but it’s been plagued with some technical issues, and a 15-inch model is not available. (Like the Surface Book, the Spectre can wobble a bit when you tap on the screen.) And you can’t buy a 15-inch Surface Pro 4, either. Lenovo’s ThinkPad Yoga has a discrete GPU, but a 15-inch version is no longer available, and its old-school looks and dimensions can’t keep up with the new Spectre anyway. 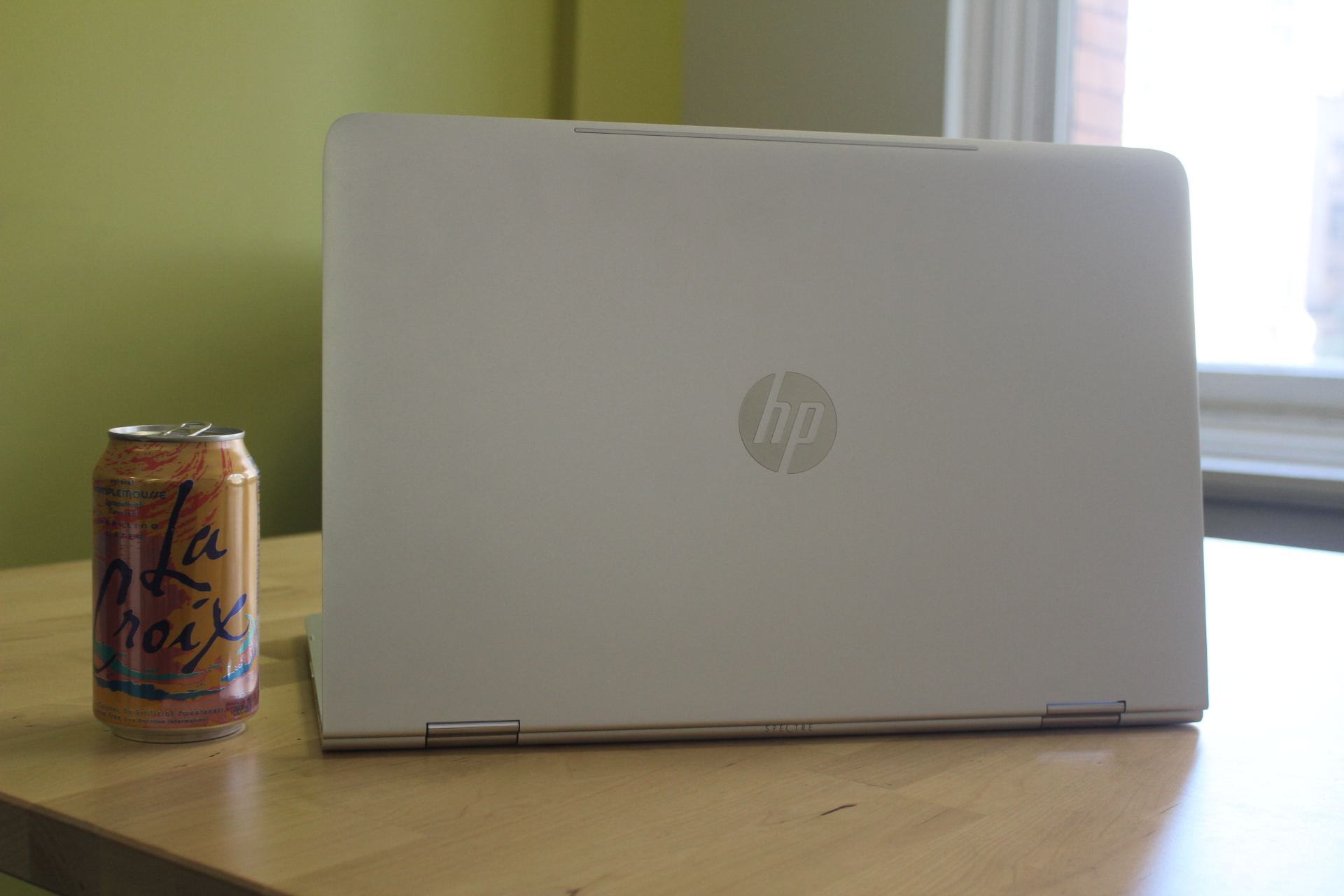 Above: The back of the new Spectre x360.

What I see here is a great option for someone who’s looking to set aside a MacBook and try out Windows 10 without getting annoyed with lackluster performance.

(For comparison’s sake, I also spent time with a version of the laptop carrying a Core i5-6200U chip, 8GB of RAM, a 256GB SSD, and a Full HD display, starting at $1,149. I observed a definite difference in everyday computing performance, although I couldn’t perceive a huge difference in the way things looked onscreen.)

I enjoyed watching movies in full-screen mode on the bigger display. Blown-up pictures looked stunning on it, too. 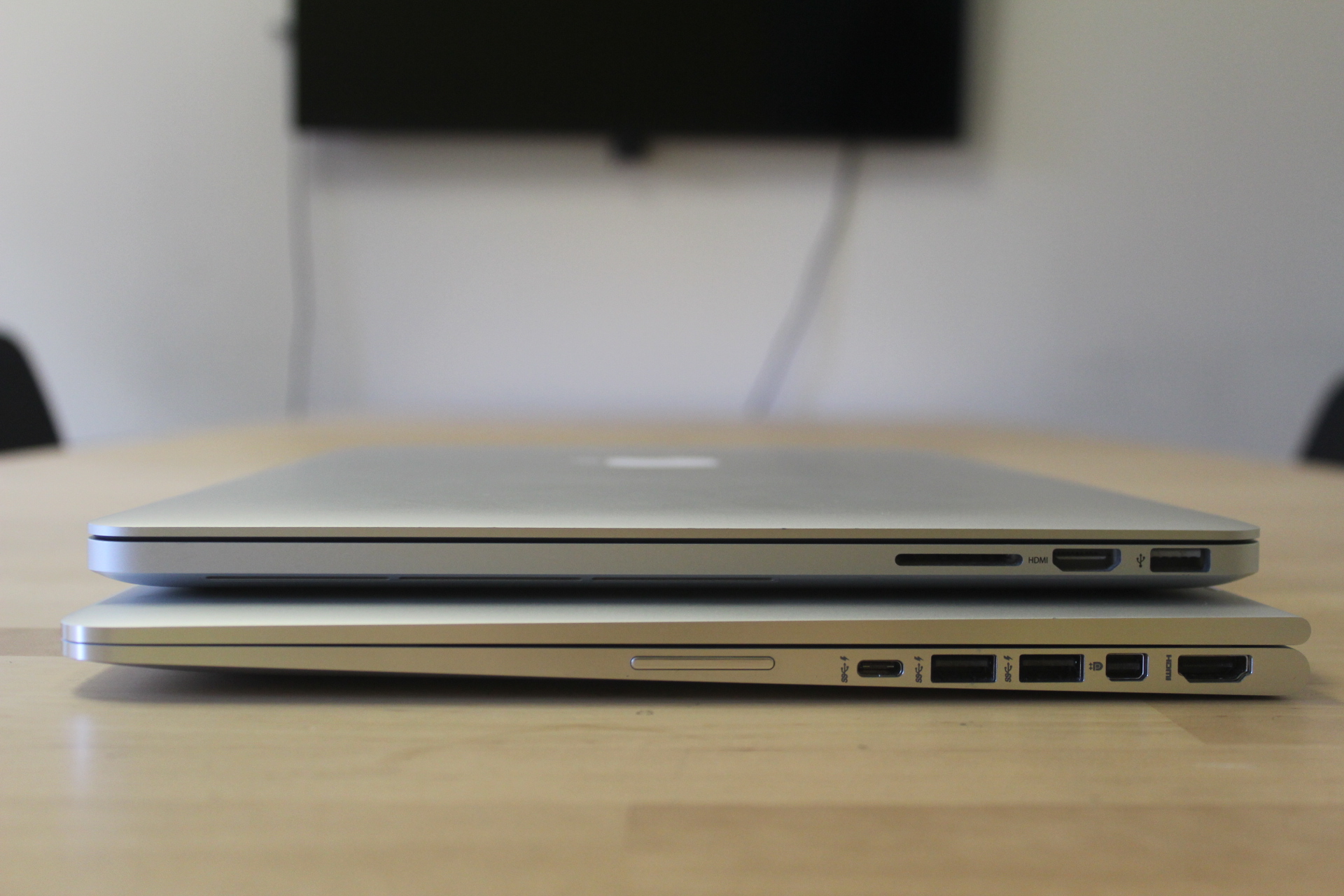 Above: MacBook Pro on top, Spectre x360 on the bottom.

At times there was a gentle whistling sound and heat coming from the fans while I watched videos and browsed the Web with many browser tabs open.

That said, this laptop does a better job than HP’s Spectre x2 2-in-1 when it comes to running many applications at once.

The machine’s battery lasts 13 hours, HP executive Mike Nash told reporters in a briefing a few weeks ago. I wouldn’t challenge that claim. The thing keeps going for a surprisingly long time, considering how big the touch-friendly screen is.

A modern charger for a modern laptop

I should point out here that HP has made a new and improved charger to go with the new x360. It’s light and compact and square-shaped and, other than its charcoal color, reminiscent of Apple’s signature white chargers. 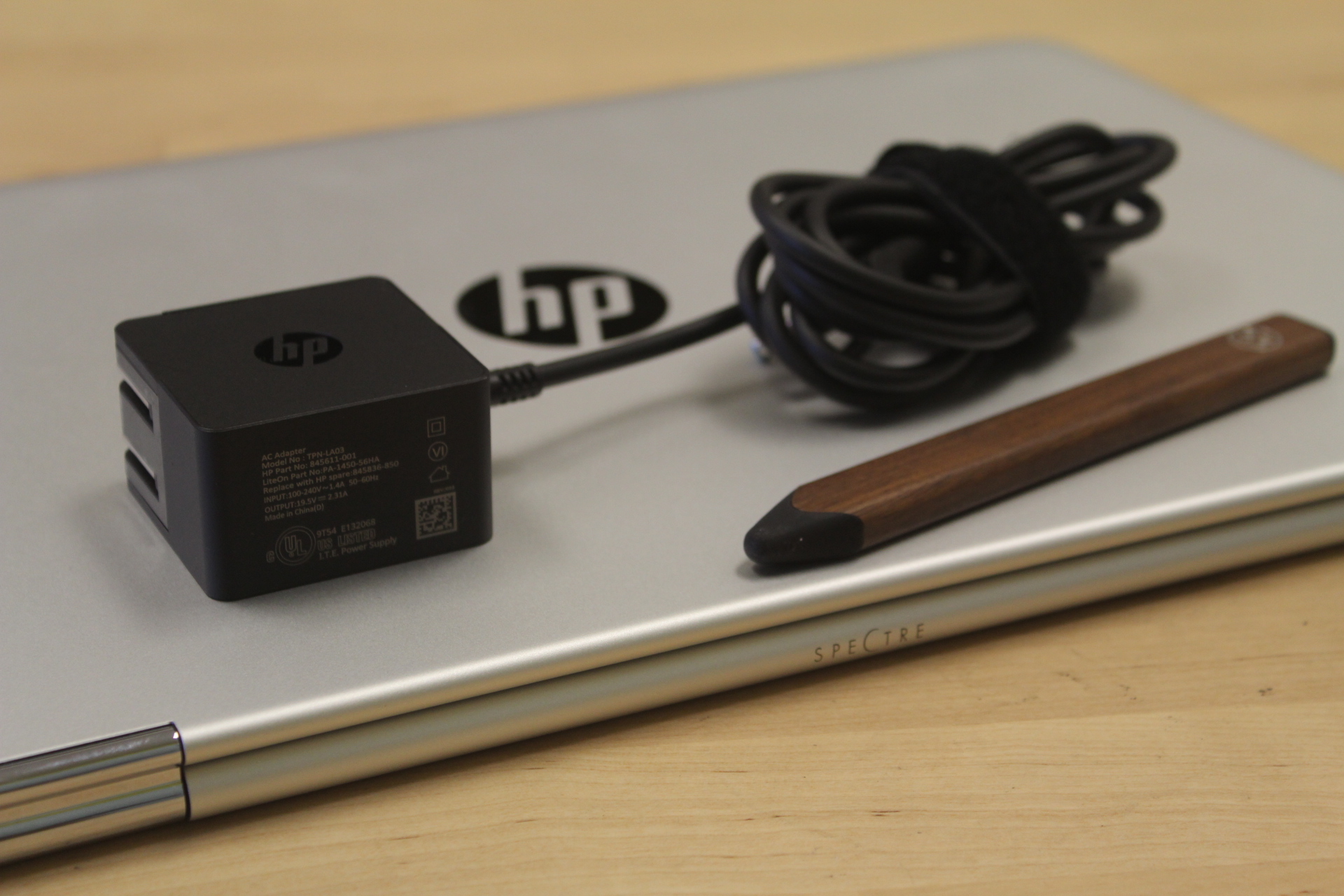 And unlike last year’s version, the laptop comes with a USB-C port, which it’s nice to see HP support, as Apple and Google have also embraced the standard.

The touchscreen feels more responsive than last year’s Spectre x360, whether I’m using a finger or a stylus. OneNote works great on it, especially when you get comfortable drawing in tablet mode.

The full-sized keyboard leaves all the space I need for my hands to sprawl out. The sturdy keys have 1.5mm of travel, and I like it like that.

Like last year’s model, the keyboard backlight is either on or off. There’s still unfortunately no in-between setting, as there is on a MacBook. 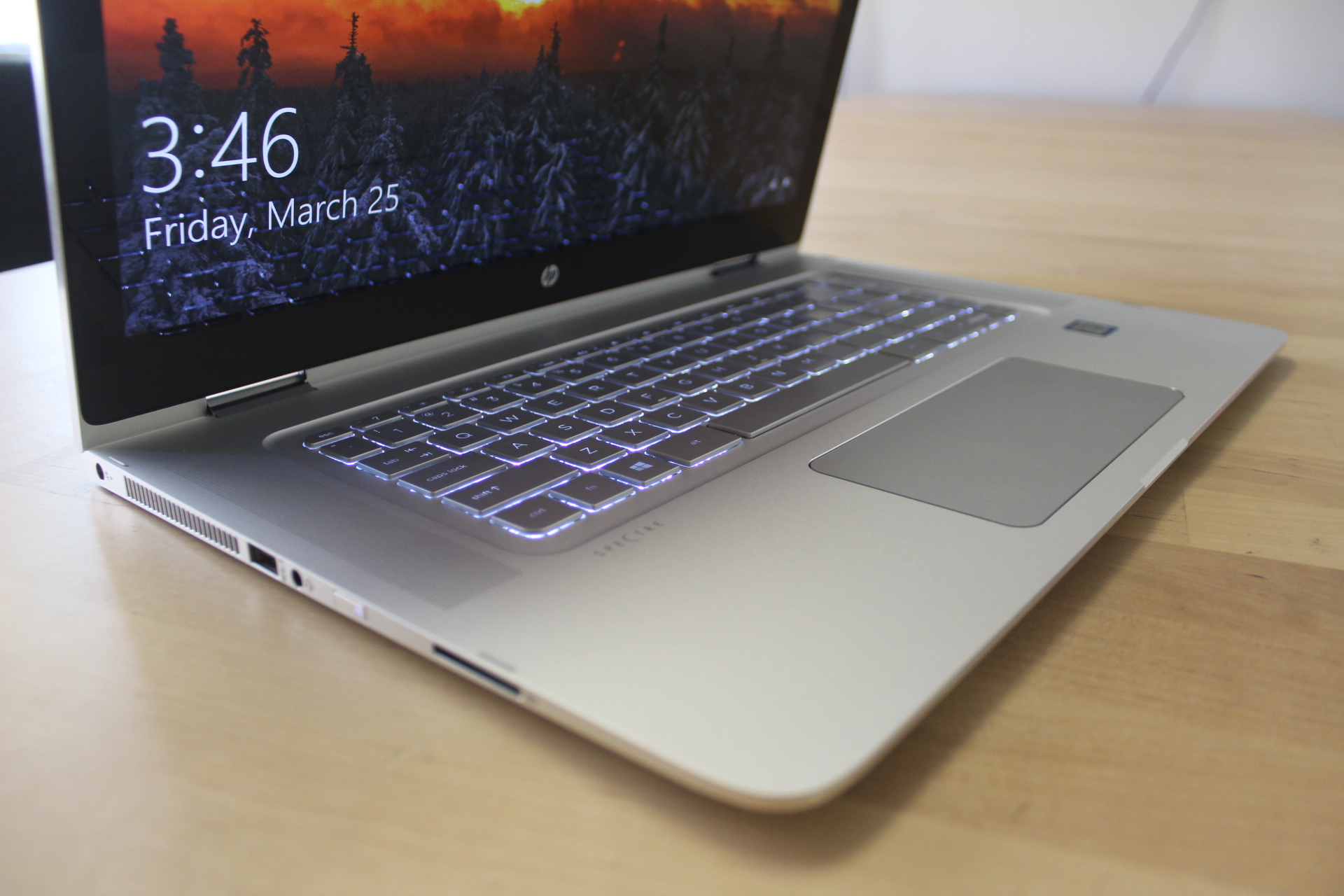 The virtual keyboard does not take advantage of the larger display. It should.

The trackpad has plenty of room, but, as was the case with last year’s model, it’s still not perfect, and I found myself making mistakes all the time. A mouse is nice to have if you’re like me and want precision.

The speakers, tuned by Bang & Olufsen, are serviceable. They could be louder, and music sounds a bit hollow.

But all in all, this a system that makes Windows look nice and perform well. It’s not a gaming laptop, and it’s not a 3D design powerhouse. It’s a solid choice for computing at work and at home. It excels at web browsing, and is good for playing videos and less graphically intensive games. So it’s powerful enough for me. I love to type on it, and I can draw all over the screen whenever I want.

I wouldn’t be surprised to see more of these devices in real life. 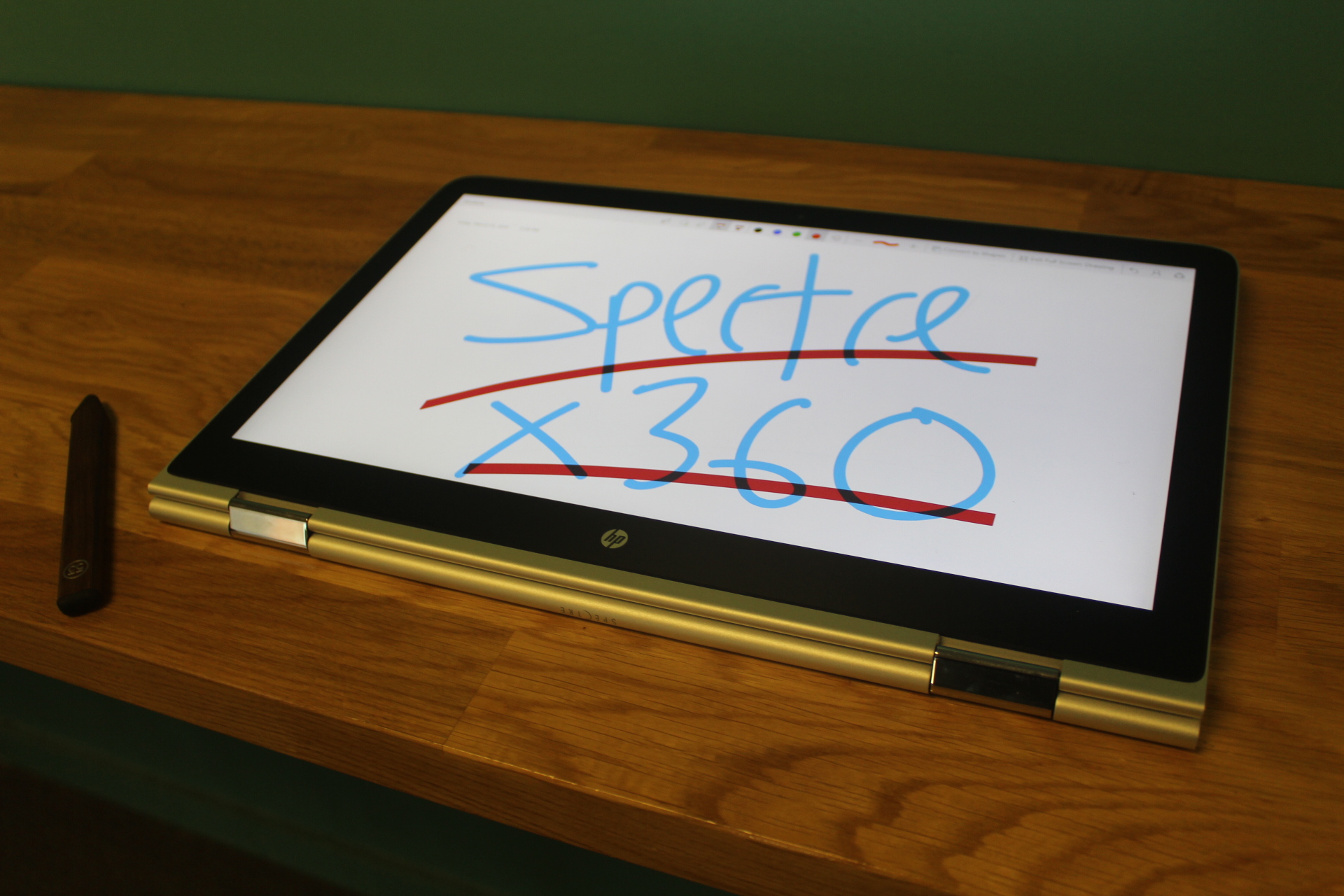 Above: In tablet mode.