There is still life in the unicorn funding world.

The swath of negative articles in the past six months about the coming demise of unicorns apparently didn’t keep investors from joining the bandwagon. Even funds like Fidelity, which saw major mark-downs in its portfolio, made one investment in the period. We also saw Accel Partners raise a $1.5 billion late-stage fund — up 50 percent from its last late-stage fund.

It is not surprising then that February was more of the same. There were about 11 financings, totaling to $2.24 billion raised. Interestingly enough, 5 of those financings were up-rounds, with the biggest mark-up being Magic Leap (valuation up by $2.5B). In the meantime, in the public market, prior unicorns saw their stock drop, some significantly. 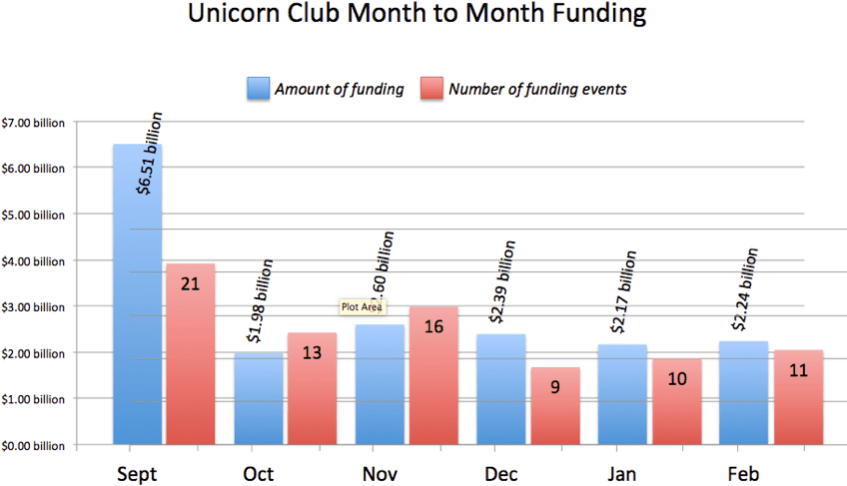 Internet of Things leader Jasper was bought by network leader Cisco Systems for $1.4 billion — up $400 million from its previous valuation almost 2 years ago. Jasper’s platform connects homes, medical devices, iPhones, dog trackers, and other devices in over 100 countries. Cisco plans to add industrial-grade Wi-Fi and improve analysis of data from all those smart devices.

Swiss brain science startup MindMaze picked up $100 million in new funding to become one of February’s two new unicorns. The company, spun off from the Swiss Federal Institute of Technology, is branching into broader areas of consumer health after launching virtual reality products to stimulate neural recovery in brain injury survivors. The new funding was from London-based Hinduja Group. 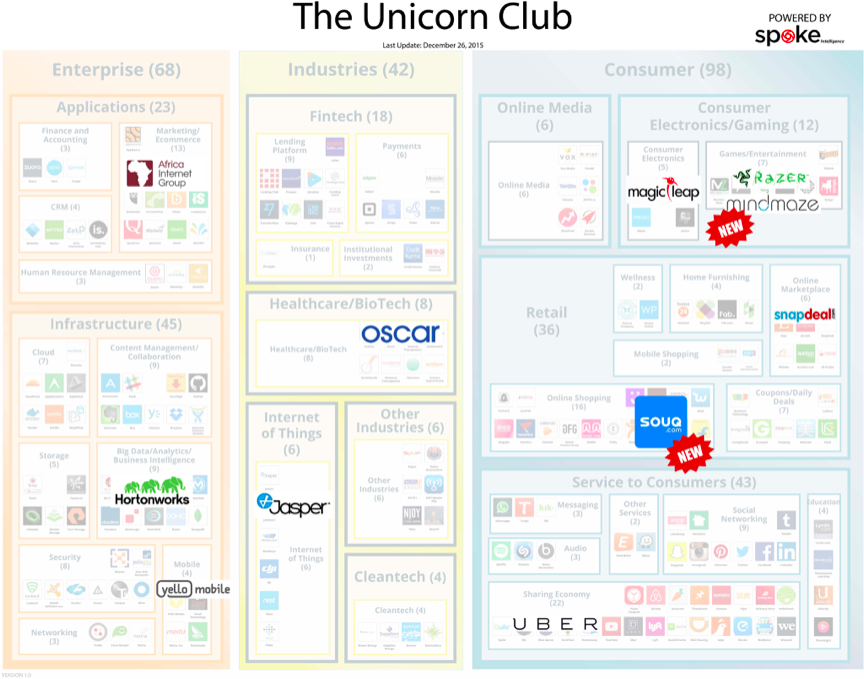 Above: View the high-resolution version on VB Profiles here. (Disclosure: VB Profiles is a cooperative effort between VentureBeat and Spoke Intelligence.)

The other new unicorn is Dubai’s Souq.com, otherwise known as the Amazon of the Middle East, which added $275 million in funding from Tiger Global, Naspers, and others. Souq.com, founded in 2005, offers 400,000 products to 24 million shoppers a month.

But the month’s top fundraiser by far was Magic Leap, a Florida virtual and augmented reality company now valued at $4.5 billion after bringing in $793.5 million in February. The new funding, led by Alibaba, will speed up the introduction of the company’s “Mixed Reality Lightfield” experience and other products using Alibaba’s platforms. Other funders include several U.S. financial companies and Warner Bros.

Oscar Health Insurance got a $400 million cash injection from Fidelity and previous Oscar funders. The New York City company, which recently expanded into three other states, aims to use technology and design to humanize health care, offering such benefits as free telemedicine.

Other top fundraisers were the previously mentioned Souq.com ($275 million) and Uber and Snapdeal at $200 million each. Uber raised the investment from Luxembourg-based LetterOne to open its ride-sharing doors to emerging markets. Funding for Snapdeal, India’s biggest ecommerce company, came from Canada’s Ontario Teachers’ Pension Plan and India’s new venture capital firm Iron Pillar. The money will go to upgrades across the Snapdeal system.

Nigerian ecommerce conglomerate Africa Internet Group picked up $83 million in new funding from AXA Insurance, which gets an 8 percent stake and access to AIG’s network to sell insurance in Africa. AIG operates in 26 countries, with 71 subsidiaries from retail to real estate, travel, and person-to-person lending.

Southern California gaming software and device maker Razer raised $75 million, selling a 5 percent stake to investors. The round was led by Digital Grid (Hong Kong) Technology, bringing the company’s valuation to $1.5 billion. Razer started with basic gaming peripherals in the 1990s and is now moving into virtual reality devices and wearables.

And Seoul-based Yello Mobile got $30 million in new funding from Japan’s SBI Holdings. The diverse mobile media company, established in 2012, has grown rapidly by acquiring over 80 other app startups.