Dyson shot to fame for its bagless vacuum cleaners more than two decades ago, and in the intervening years the U.K. company has launched everything from hand-dryers and heaters to washing machines and air multipliers. Exactly a year ago today, Dyson launched its first ever air purifier — the device launched only in China at first, a country long plagued by pollution, with more than one million premature deaths attributed to bad air, according to some studies.

Today, Dyson is introducing a brand new version of the air purifier to the U.S. and other markets around the world. The $500 Dyson Pure Cool Link is similar to the first incarnation, except this one can connect to your smartphone to let you control the contraption and view stats relating to all those nasty pollutants in your home. While users can manually control the purifier, an automatic mode can be enabled to react when the air quality hits a predetermined level.

Consisting of a 360-degree glass high-efficiency particulate arrestance (HEPA) filter, the purifier controls the airflow to maintain a preset target air quality, and it also doubles as a fan to keep rooms cool in the warmer months. There are two versions — the “tower” incarnation is aimed at larger rooms or for putting on the floor, while the “desk” version is smaller and designed for placing on tables or desks. Using their engineers’ expertise in fluid dynamics and filtration systems, Dyson claims the purifier fan “automatically removes 99.97% of allergens and pollutants as small as 0.3 microns” from the atmosphere in your home.

Though the Pure Cool Link isn’t the first connected air purifier on the market, it represents Dyson’s first ever “connected” product in the U.S. and only its second foray into the so-called “Internet of Things (IoT)” following its robotic vacuum cleaner launch in Japan last year.  Indeed, 2016 is gearing up to be the year that was for connected products, with smart doorbells, ovens, beds, and fridges hitting the headlines in recent months. 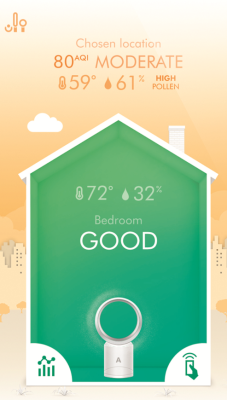 With its connected air purifier, Dyson is vying for a market that’s growing increasingly wary of pollution hazards — and this isn’t limited to the great outdoors. Anyone living near heavy traffic, for example, can be breathing in harmful particles in their sleep. Some studies suggest that ultrafine particles (UFPs) — particles of 100 nanometers (NM) or less in size —  emitted from car exhausts can lead to ailments such as heart disease. But more than that, pollutants from deodorants and cleaning solvents to scented candles and mold can also contribute to domestic pollution.

“We think it is polluted outside of our homes, but the air inside can be far worse,” said Dyson founder James Dyson. “Dyson engineers focused on developing a purifier that automatically removes ultrafine allergens, odors and pollutants from the indoor air, feeding real-time air quality data back to you.”

The Dyson Pure Cool Link purifier will be available in the U.S. from today (March 30) through Dyson.com, and from April 11 in retailers. It also goes on sale across Europe and Asia tomorrow.

Dyson has previously announced plans to invest a third of its profits back into research and development (R&D), and set aside a $2.3 billion fund back in 2014 for “future technologies.”