Fresh from its $40 million funding round back in January, U.K. startup Citymapper has updated its super-popular mobile transit and navigation app with a new feature that blends public transport with private cars to find the optimum route from A to B.

Founded out of London in 2011, Citymapper has gone from strength to strength over the past five years, expanding into a global phenomenon that helps commuters and tourists traverse Tokyo, New York, San Francisco, Los Angeles, Chicago, Boston, Paris, Madrid, Mexico City, and more. Citymapper doesn’t always attract the same headlines as other U.K. or European startups, but the company has drawn plaudits for its user-centered approach to navigating major conurbations.

The update, which is only available in the iOS version initially, signals Citymapper’s intent to differentiate itself in the space. Combining public transport (e.g. trains, buses, metros) with car transport helps it stand out against other providers — including Google Maps — which have all traditionally separated out modes of transport into “public” and “private,” with some also offering cycling, walking, and taxi options too.

Looking at the example below from the San Francisco Bay Area, Citymapper combines Caltrain and Uber to knock 24 minutes off a journey from Stanford to Apple’s Cupertino headquarters by train, and at a cost of $10 rather than the $40 you would pay to use Uber for the entire route. 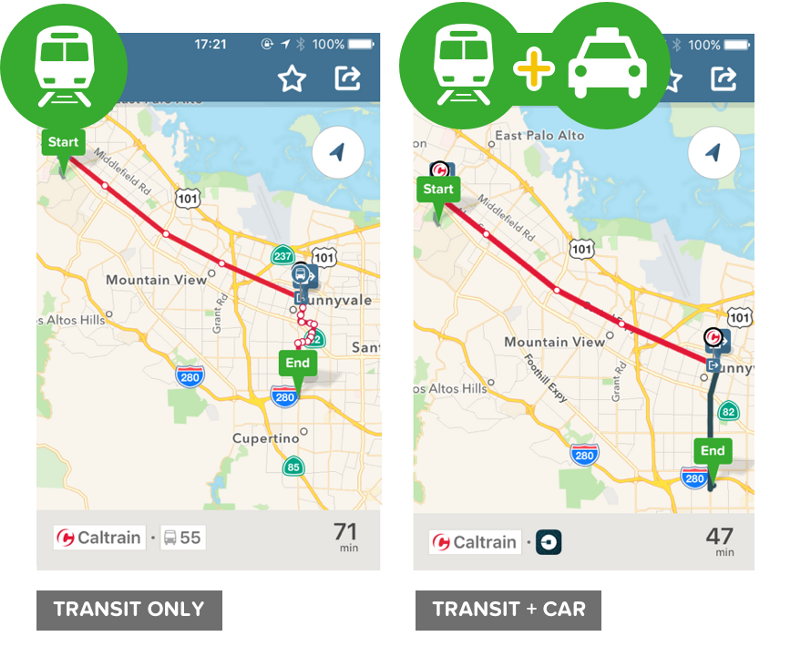 The crux of the problem is this: You may want to get to your destination as quickly as possible, but you’d prefer not to spend your life’s savings on a taxi. And at any rate, a cab may not even be the quickest option if you’re in the middle of rush hour. There are many permutations of price versus other practicalities to consider, so Citymapper will now look at the entire transport spectrum and figure out the best route combining all available options. This means it may recommend that you grab an Uber between stations if the train timetables for a transit don’t work in your favor or a certain part of a city simply isn’t well-served by public transport.

Given that many people already operate in this way, perhaps using a “park and ride” system to mix cars and trains or buses, Citymapper wants to take the pain out of working out the logistics. Though Citymapper is only using Uber’s API for now, the user isn’t tethered to Uber — the information can still be used to arrange any private car transport or a cab through another provider.

Citymapper has raised $50 million since its inception, and the key to its success has been its focus on transit and transport, rather than on pure navigation. This has allowed it to carve out a solid reputation away from the heavyweight incumbents, such as Google Maps. Of course, Google recognizes the importance of transit and transport data too, and last year launched a standalone Citymapper-esque public transport app for New Delhi residents.

Citymapper’s SuperRouter feature is still early-stage, and Citymapper says it has some way to go before becoming the ultimate multimodal transit app. “We will get better over time as we learn from usage and receive feedback from the real world,” it said. “We plan to improve our calculations of prices, travel times, transfer costs and include features such as better pickup points for cabs around train stations.”