Last month, Medium gave the biggest hint yet as to what its future may hold for publisher monetization; today the popular blogging platform officially unveiled the first stage of this plan.

Today’s news comes a few months after Medium introduced a new publishing API, WordPress plugin, and a myriad of partners at an event in San Francisco, where founder Ev Williams said there would soon be new ways for publishers to make money from their content.

With Medium for Publishers, bloggers and publications can access a slew of new branding tools that makes it easier to customize the look-and-feel, including layout, navigation, and color scheme. But encouraging publishers to switch to Medium will require more than that — the practicalities of moving what could be years of content from another content management system (CMS) can be preclusive to even attempting it, which is why Medium has built a tool to make it simpler to switch from other platforms, taking all their archives and associated timestamps with them.

Medium has already been working behind the scenes to convince a handful of publishers to make the jump, with a number of indie publications flipping the switch today, including the Pacific Standard, The Awl, Franklin Leonard’s The Black List, Monday Note, Femsplain, Electric Literature, FilmSchoolRejects, The Kicker, The Bold Italic, NewCo Shift, The Banana Boat, MEL, and Above Average. Some higher profile ones are also on their way over, according to Medium, including Time Inc.’s Money. 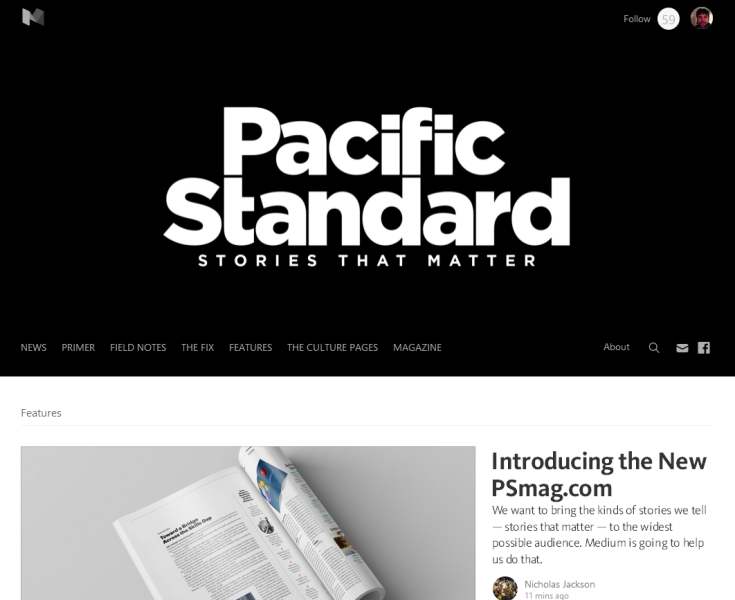 But getting the publishers on board is only part of the story here — companies want ways to make money, and Medium announced a new beta program today for that purpose with revenue-sharing at the core.

You’ll not win any prizes for guessing that advertising figures highly in Medium’s monetization plans — the ads come in the form of Promoted Stories which are paid for by “brand partners,” which include Bose, SoFi, Nest, Intel, and Volpi Foods at launch, and these stories will be visible at the end of Medium articles. There will also be the chance to create sponsored content in conjunction with individual publishers — it’s not entirely clear what this native advertising will look like yet, but here’s hoping they’re better than BuzzFeed’s advertorials.

Media outlets with money-making aspirations beyond that of advertising will be pleased to know that Medium will also offer membership fee options, letting readers pay a subscription directly to the publication. Among the titles offering such an option at first include Serious Eats, True Magazine, and Great Jones Street, which will be offering content available only to paid members.

Medium has emerged as the default blogging platform for thousands since its inception back in 2012, and it has been used by individuals and companies alike — even those who already have their own blogs and websites to publish on. It has the mindshare and traction now, and with more than $80 million in funding — including a $57 million round last year — Medium is starting to double down and figure out a business model.

It’s no doubt a tough ask getting publishers to switch allegiance from WordPress or whatever their existing CMS of choice may be, but what Medium is offering is simplicity: full hosting, branding, personalized domain names, and now the final piece of the puzzle — monetization. This leaves publishers with just one thing to worry about, and that’s creating words and pictures for their audiences. Williams has also previously suggested it could cater specifically to videos and podcasts, so in many ways this feels like the start of something big at Medium.