Last year, I moved to Europe to work in a growth stage venture capital fund. Having invested in tech companies in India and the US before, I expected the European tech ecosystem to be much smaller in comparison. However, the last year has been eye-opening. The European tech industry has more scale and intricacies than you might think.

In 2015 alone, more than $14 billion was invested across 2,400 startups in Europe. That’s a three-fold increase from the $5 billion invested in 2009. While the US and China have stolen most of the attention in the exit market, Europe has seen its fair share of exits as well. Just the last five years saw $45 billion worth of exits from Europe in a wide variety of forms — from IPOs in the US (Criteo, KING, Zendesk, etc.) to IPOs in Europe (JustEat, Scout24, Zalando, Rocket Internet, Zoopla, etc.) to acquisitions by US tech majors  (Mojang, Deepmind, Skype etc.) to acquisitions by Asian companies (Viber, Quandoo, etc.), and more.

Here are some key insights I’ve picked up from my European investing experience that might not be so obvious to those far away:

1. European innovation is ahead in several sectors. Europe is ahead of the US in such tech segments as fashion, music, gaming and fintech. Spotify, SoundCloud, Shazam, and other music-tech startups all originated in Europe. Finland has long been a hotbed for mobile gaming companies — from Snake, the first ever mobile game, to Angry Birds and Clash of Clans, it is interesting how a nation with a population of 5 million has given us so many globally successful gaming titles. Zopa, one of the first peer-to-peer lending sites in the world, was founded in London, which is now home to a number of other innovative fintech startups. On the fashion front, Vente-Privee (France) pioneered the concept of flash sales sites back in 2001. However, Europe lags behind the US in enterprise software innovation. 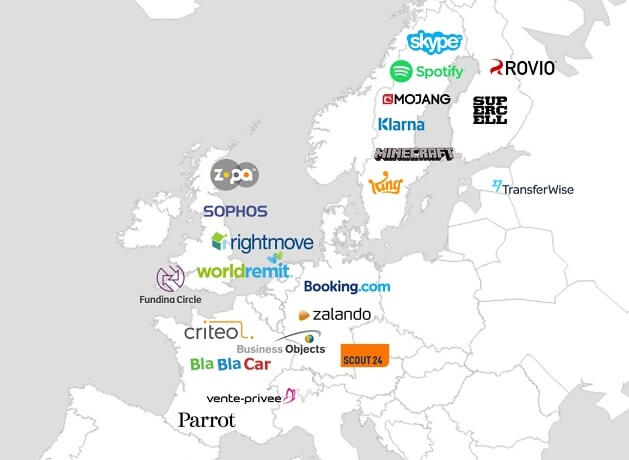 2. European market fragmentation is an issue. As investors in the US rightly point out, the individual markets in Europe are small, and scaling beyond one country is difficult. Intra-European legal and regulatory barriers present additional obstacles. However, despite these issues, entrepreneurs are increasingly taking a pan-Europe approach. Some of the growth stage companies I’ve met either already have a presence in at least two major markets or have a clear plan for conquering several of them. Companies like BlaBlaCar, GetYourGuide, GoEuro, Babbel etc. expanded beyond their home geography early in their life cycle.

3. Europe faces a dearth of growth stage financing. The ratio of Series B to Series A rounds (or seed) in Europe is significantly lower than that in the US and China. Late stage deals are rare in Europe. In 2015, there were around 175 VC deals exceeding $50M in the US, around 75 in China, and around 35 in Europe. Also, European companies tend to raise smaller rounds at each stage of funding than their US peers.

4. The sharing economy is more prevalent in Europe. Though AirBnB was founded in the US, more than 50% of its business is based in Europe. Six of the top 10 cities on the platform are in Europe, with Paris being number one. Even before the sharing economy became cool, various European cities had a number of bike and car sharing schemes. The concept of bike-share was pioneered in Europe in the late 1990s and Europe still accounts for 70% of all bike-sharing schemes globally. On a similar note, Europe accounts for 40% of all vehicles in the global car-sharing market; the US accounts for 30%. Having said that, it is US entrepreneurs (AirBnb, Uber, ZipCar) that have best capitalized on this opportunity.

5. European companies need to be more aggressive. If there is something that European companies can learn from their US counterparts, it is global ambition and aggressive execution. Most European entrepreneurs strike me as humble when pitching their businesses, no matter how great their product is. Coming from India and having worked in the US, I am used to pitches being about global ambitions and thinking big from the get-go. In addition to this, I believe that the VCs also need to play their role in ensuring that more European companies reach global scale.

6. Language is not an investment barrier. I’ve met with entrepreneurs in more than 10 countries in Europe, and in most cases the founders can interact fluently in English without the help of translators. Understanding the local language is not a must in order to make deals in Europe. This makes the day-to-day interaction significantly easier than, for example, in China, where we frequently need translation help from our local team.

7. Capital efficiency seems to run in the European DNA. Between 2011 and 2014, while Europe had fewer exits exceeding valuations of $100M, those exits were significantly more capital efficient (calculated as exit valuation / total funding) coming in at 18.6X compared to the US, which was at 8.1X. Traditionally, European startups have had comparatively lower staff costs, and rent for office space seems lower across the board. In addition, customer acquisition costs for consumer Internet companies are lower in Europe compared to the US.

8. Regulated working hours is fast becoming a myth. It is true that governments in Europe set a limit on the maximum hours an employee can be asked to work. However, this has not been reflected when I have paid visits to offices in the startup-hubs of Paris, London, Berlin, and Stockholm. The new species of European entrepreneur is willing to give it all, not worrying about the time of the day or the day of the week.

There is a lot more to the European tech ecosystem than meets the eye. And the mantra of Europe (that I have openly embraced) is simple: Drink wine and break things!

Vivek Goyal is an investment team member at Nokia Growth Partners where he has been part of NGP’s investments in GetYourGuide, Cedexis, Digital Lumens, WorkFusion, Indix, Rapidminer, and ZoomCar. The views shared in this post are his own.