I never win raffles, but I finally did last week at the MIT Xconomy in Boston. My prize was a Roomba. These robotic vacuums have been around for years for personal use, but now hotels are using similar devices to not only automate the cleaning process but also most of the hotel functionality like check-in, check-out, food delivery, and the automatic folding of clothes. There’s even a completely robot-powered automated hotel in Japan.

As a service, automation is invaluable when done well. Businesses and investors are both looking to put a price on the convenience in order to maximize their gains. The technology is sometimes imperfect, yet the incentives for businesses to reduce labor costs are enticing in a variety of industries.

We are witnessing a major shift towards automation, particularly as the minimum wage rises and businesses are seeking ways around paying higher wages. In this post, I’ll address a couple of industries where automation is really taking off: cars, food service, and manufacturing. 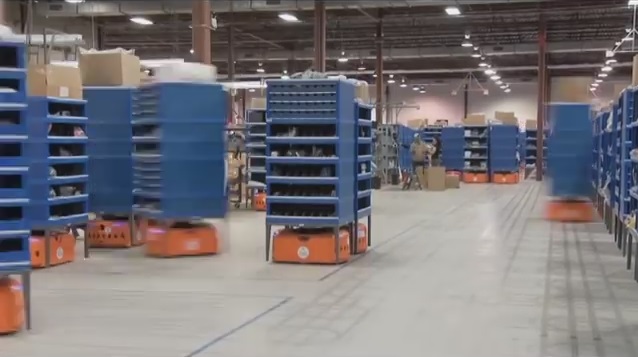 Above: Still shot of Amazon’s smart shelves in action from a Kiva Systems YouTube video.

Robotics had its first unicorn last month when Cruise Automation was purchased by General Motors for $1 billion. The autonomous vehicle industry is predicted to be valued at $42 billion by 2025. McKinsey expects that self-driving vehicles could redefine the concept of car ownership, usage (especially for the aging Baby Boomers), and of course safety standards. However, this is already happening right now with Tesla’s electric cars and other “handsfree” manufacturers.

Last week was a watershed moment, when the announced Model 3 (which has auto-pilot features to steer down highways, change lanes, and adjust speeds) sold over 200,000 units in 24 hours! Google hopes its “chauffeur car” will hit the market soon. Some say we’ll see it in less than five years.

Volvo said it plans to begin testing 100 autonomous vehicles in China as part of its “Drive Me” program, noting that the roads there provide challenging conditions for the vehicles. The automaker will first test the technology in Sweden, and it has called for regulations that would allow self-driving cars on the road. CEO Hakan Samuelsson explained that, “There are multiple benefits to autonomous driving cars. That is why governments need to put in place the legislation to allow them onto the streets as soon as possible.” 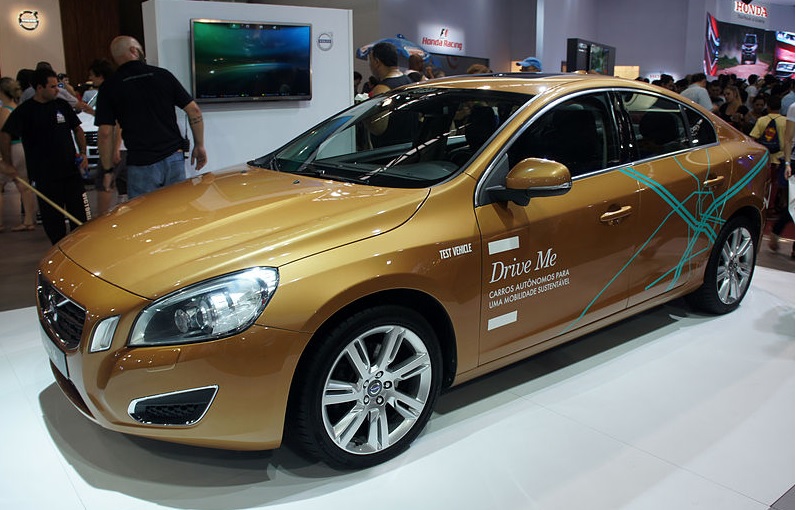 In the meantime, and in the wake of the recent Amtrak accidents, it is important to note that people tend to overlook other automated forms of transportation. There are now 48 subway systems in 32 countries that have achieved full automation. However, for inter-city and cross-country trains, automation has been more difficult to achieve largely because of the vast distance of track that needs to be monitored. This is on top of union problems, legal issues, and regulatory issues.

The Autonomous Drive Thru

Being asked, “Would you like fries with that?” could one day be a thing of the past. McDonald’s has been experimenting with machines where customers can input their orders without having to interact with someone standing behind the counter.

The Carl’s Jr. chain wants to open its first fully-automated store. According to the CEO, you “order on a kiosk, you pay with a credit or debit card, your order pops up, and you never see a person.” Now they can even go one step further by firing the $15/hour fry cooks and replacing them with a robot that can cook and flip burgers from Momentum Machines. The robot can “slice toppings like tomatoes and pickles immediately before it places the slice onto your burger, giving you the freshest burger possible.” The robot is “more consistent, more sanitary, and can produce ~360 hamburgers per hour.” That’s one burger every 10 seconds.

Taco Bell has teamed up with Slack, the messaging app, to write a software program that let’s you order by chatting with TacoBot.

In New Zealand, Dominos is now delivering pizza robotically using the world’s first driverless units. It can hold up to 10 pizzas and can go as far as 12.5 miles from a store before returning to charge. New Zealand is still working on regulations designed to allow these kinds of driverless robotic units (DRUs) to operate on roads and footpaths.

This week I moderated a panel at RoboUniverse in New York, which included the CEO of Fetch Robotics. She has created robots that pick and pack products from the shelves and follow humans around autonomously. They work with another company I have met with called Soft Robotics, which has created a gripper that simulates a hand to, for instance, pick up fruit without crushing it.

Last week at the Xconomy conference, I met with Amazon’s robotic team in Boston, discussing how they have completely automated their fulfillment to get shipments out quickly and cheaply. That’s why they bought robotic shelf maker Kiva Systems (for more than the price of Zappos) and use those robotic shelves in their warehouses, where they smoothly slide across the floor to deliver inventory as quickly as possible with little need for paid employees.

So hopefully it won’t be long until I can just stay home and have everything done autonomously for me? In the meantime, I’ll just get that Tesla.

Nisa Amoils is an angel investor, advisor and former entrepreneur. She is a member of New York Angels. She invests in a variety of technology and is the co-chair of the frontier technology committee which encompasses AI/VR, robotics, drones, driverless cars, autonomous innovations etc. She blogs on Medium @AmoilsNisa.