The new 9.7-inch iPad Pro is a very nice tablet. With features like Split View and the optional $99 Apple Pencil, you can actually get a lot done with it. But if you like to stretch out when you type, you might not be a big fan of the optional $149 Smart Keyboard that Apple designed to pair with the tablet. It’s a little cramped.

Fortunately, you can use the tablet with other keyboards. For instance, Logitech’s K380 Bluetooth keyboard works fine. But if you want to have a truly impressive typing experience, you really ought to consider a real keyboard. Something like, say, the Apple Extended Keyboard II. From 1990.

I’m typing on it now. It’s amazing. The loud “pop-pip” sound of the keys. The very impressive travel of the keys — around 2.5 mm. The satisfying feeling of the keys being actuated, which has to do with the switch underneath each and every key. The full numerical keypad on the right. The durability. The full-sized tab, return, delete, shift, and command keys. A backspace key! An escape key! Page up and down keys! A caps lock key that really locks! On and on and on. This is no makeshift keyboard. This is the genuine article.

Sure, there are drawbacks. Unlike the Smart Keyboard, this mechanical keyboard doesn’t prop up the iPad Pro at a comfortable angle, and it doesn’t protect the tablet’s screen from scratches. And it’s heavier. And it doesn’t plug right in to the iPad. But I don’t care about those things. For a superior typing experience, I’m willing to make these sacrifices. The style points you’ll get for rocking this setup will make it worth the hassle.

If this setup sounds interesting to you, and you’d like to replicate it, here’s what you’ll need to know.

You’ll probably want a mechanical keyboard built specifically for Apple devices — you know, one that has command and option keys instead of a Start key. Apple no longer sells these in stores — after all, they came out more than 20 years ago — but you can still find them.

There are third-party Mac keyboards to be had. But the gold standard is the Apple Extended Keyboard (M0115), which debuted in 1987 in conjunction with the Macintosh II and Macintosh SE, and its replacement, the Apple Extended Keyboard II (M0312 and M3501), which came along in 1990 alongside the Macintosh LC, Classic, and IIsi. There aren’t huge differences between the two, but the newer one lets you adjust the height of the keyboard.

I paid $75 for my Apple Extended Keyboard II (M3501) on eBay. But right now someone is selling that same keyboard and an Apple Desktop Bus Mouse together on eBay for $49.99.

The keys on these mechanical keyboards are considerably higher up than the ones on Apple’s modern-day Smart Keyboard. To make sure I have good posture, I bought myself a nice and tall wrist rest from Glorious PC Gaming Race ($19.99). This, of course, is an optional accessory.

To hook up an old Apple mechanical keyboard to a gadget like the iPad Pro, you’re going to need not one but two adapters.

The first one will step down from the Apple Desktop Bus (ADB) protocol to standard USB. The most widely known adapter of this type is the Griffin iMate, which has an LED that flashes every time you strike a key on the keyboard. Griffin has discontinued the product, but you can still find a few online (mine cost $69 on Amazon), and other USB-ADB adapters are available, too.

The second adapter you’ll need will take you from USB to Lightning. You can buy one of these directly from Apple for $29.

While this kit works very well as an alternative to the 9.7-inch iPad Pro’s Smart Keyboard, in fact you can use it with other Apple devices that have a Lightning port, like an iPhone, or even those with a regular USB port, like a MacBook Air.

You can even use this type of keyboard with Windows. But now I’m really getting carried away.

The important thing is that if you don’t love the Smart Keyboard that goes with the 9.7-inch iPad Pro, that’s OK. You can go retro instead. 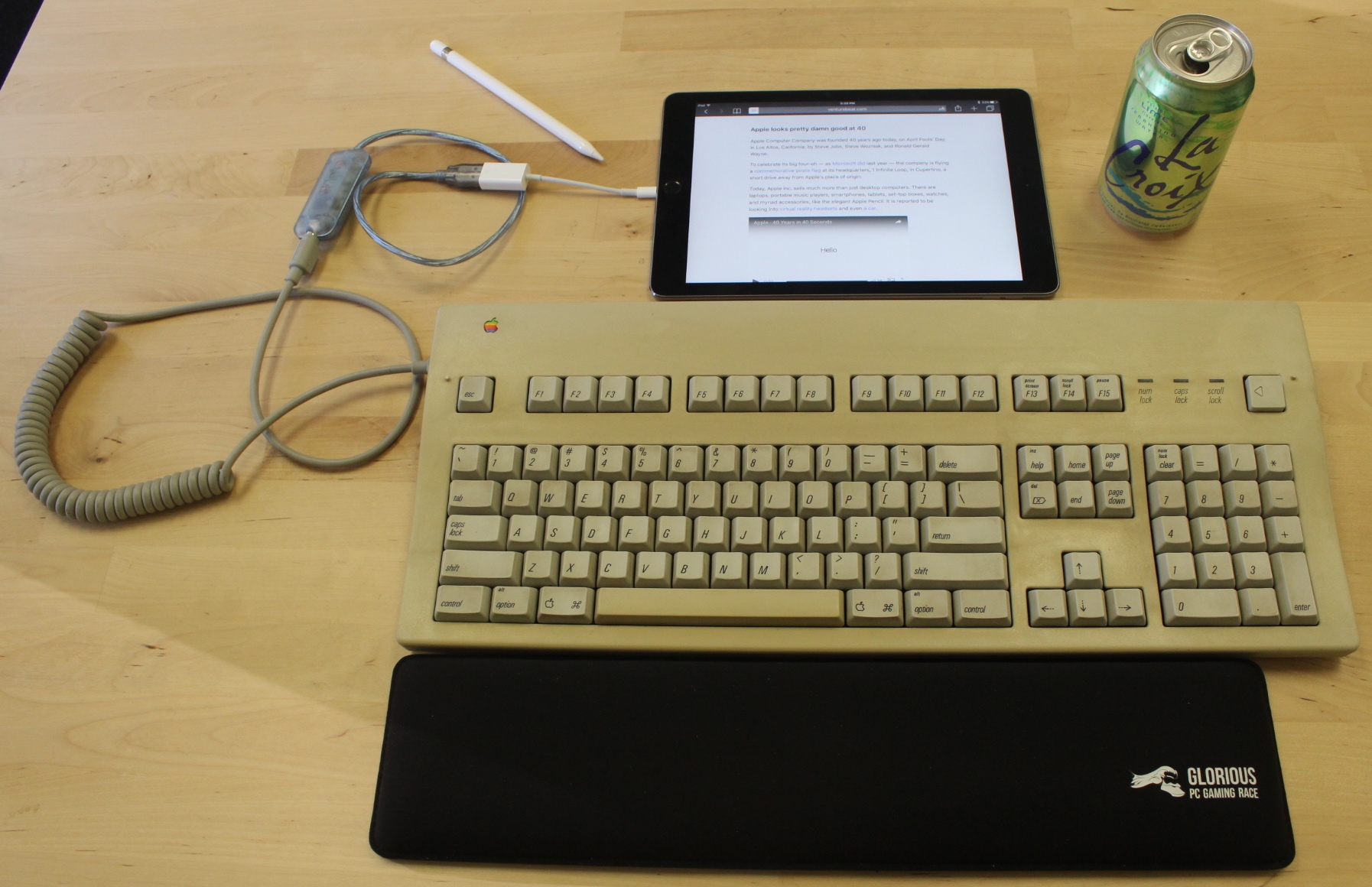 Above: All I want to do is type.