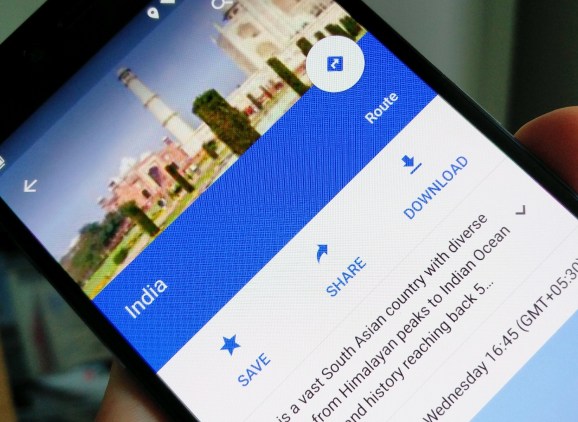 Back in September, Google promised to bring Wi-Fi to hundreds of train stations across India, an initiative that kicked off in Central Mumbai in January. Today, the program is available in 10 stations, after the Internet giant opened high-speed public Wi-Fi in Bhopal, Ernakulam Jn, Bhubaneshwar, Ranchi, Kacheguda, Pune, Vijayawada, Vishakhapatnam, and Raipur.

“We hope that people passing through these first 10 stations will enjoy being able to easily stream (or offline) an HD video, research their destination, or download a book or a new game for their journey ahead,” said Gulzar Azad, Access Project head at Google India, in a blog post.

India is emerging as a key battleground for Internet companies — a country with a population of around 1.3 billion people presents many opportunities — but most of these people still aren’t online. And this is why we’re seeing an increasing focus on getting people online.

Back in October, Google launched its very first dedicated transit app — but only for those in New Delhi. What was perhaps most notable about this Android-only app was that it offered directions and timetable data for buses and metros in an offline mode. This is so that those on a limited data plan, or where reception is poor, can still receive transport data. But it’s papering over the cracks — what Google and other Internet companies really want is ubiquitous, fast web access, so consumers can use the company’s respective services uninterrupted.

When Mark Zuckerberg took to the stage for a Townhall Q&A at the Indian Institute of Technology (IIT) in Delhi last October, he explained why India is so interesting to his company. The abridged, paraphrased answer is this: Facebook has 130 million users in India, out of a population of more than one billion people. That’s a large pool of untapped ad-viewing eyeballs, and thus India represents one of Facebook’s largest untapped markets.

Facebook has been pushing to connect large parts of the world — back in October, it revealed a partnership with French company Eutelsat Communications to bring broadband to Africa through satellites, and earlier this week, Mark Zuckerberg confirmed that the launch is only a few months away. Last June, Facebook announced it was exploring the use of drones to bring Internet to those without access. But it hasn’t all been peaches and cream for Facebook in India. With its Internet.org initiative — a collaborative project launched back in 2013 to help “connect the next five billion” — Facebook partnered with companies to offer free access to online content. But as it turned out, people didn’t want Facebook’s walled-garden Internet. The backlash was such that authorities introduced a law in February targeting ‘discriminatory tariffs’ that favor specific services — all in the name of net neutrality.

Google, meanwhile, has been testing balloon-based Internet through Project Loon, part of an effort to get people in remote areas online and using Google’s online services. But efforts to control the source of the Internet aren’t restricted to emerging markets. Last month, Japan’s mobile messaging giant revealed that it plans to become a mobile virtual network operator (MVNO). This announcement came just after Google’s very own Project Fi MVNO service opened to everyone in the U.S. Google also now offers its own Fiber superfast broadband service, which has been gradually permeating the U.S.

Google plans to bring its free public Wi-Fi to 90 more train stations in India by the end of 2016. By 2017, it’s thought that as many as 500 million people in India will have some form of Internet access, but that’s only a guesstimate, and it’s still only scratching the surface. What Google’s Wi-Fi rollout in India reminds us all is that Internet companies want to speed things up, and they’re taking control themselves.