Apple has finalized the dates for its Worldwide Developers Conference (WWDC). The event will happen on June 13-17 in San Francisco.

Siri, Apple’s personal digital assistant on iOS, provided that information in response to the query, “Hey Siri, when is WWDC?” (Hat tip to 9to5Mac for reporting it earlier today.) 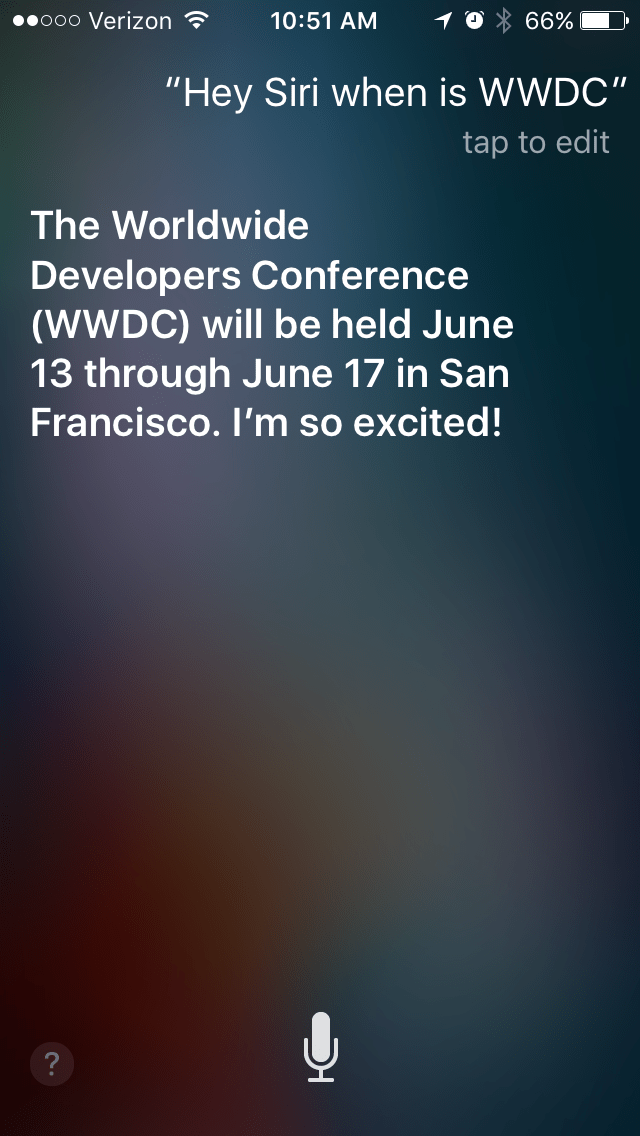 Above: Hey, thanks, Siri!

WWDC goes back to 1990, and for many years it has taken place in San Francisco, specifically at the Moscone Center, which can accommodate thousands of attendees. This year is no different. Apple will hold the Monday keynote and sessions at the Bill Graham Civic Auditorium.

Last year, announcements at the event ranged from the intent to release OS X El Capitan to the plan to open-source Apple’s Swift programming language. Apple News and Apple Music were also announced at the event.

The event will follow the Google I/O developer conference, which happens in Google’s home turf of Mountain View, California, on May 18-20.

Update at 4:08 p.m. Pacific: Apple has issued a statement confirming that WWDC will indeed be happening in San Francisco on the dates that Siri specified. Between now and 10 a.m. Pacific on April 22, developers can register for “random selection” for tickets to the event here. Apple will tell applicants if they’ve received tickets by 5 p.m. Pacific on April 25. Tickets cost $1,599. Apple will be giving away as many as 350 WWDC “scholarships” to students and members of organizations involved with science, technology, engineering, and math (STEM). As usual, the event will be streamed live.