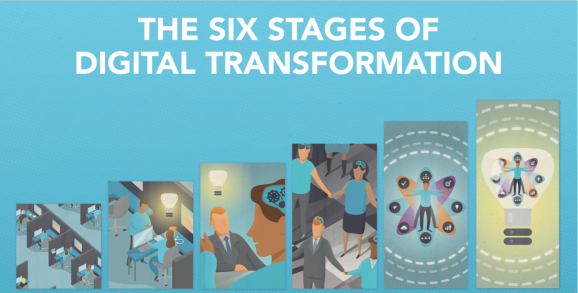 Technology is evolving right before our eyes. The things we have taken for granted, like messaging, are now becoming central in how people converse with businesses. Tech companies like Amazon, Netflix, Airbnb, Uber, Tesla, and WhatsApp are shaking traditional enterprises to their core. But instead of waving the proverbial white flag, incumbents like Hilton, Comcast, Ford, and others should evolve. A new report by Altimeter Group principal analyst Brian Solis offers a path for becoming “agile, competitive, and innovative” in the changing business landscape.

In his latest report, “The Race Against Digital Dawinism: Six Stages of Digital Transformation,” Solis looks at how companies aren’t conceding defeat, but rather adapting to change and becoming modern businesses. He thinks that firms need to undergo a digital transformation, a “movement progressing without a universal map to guide businesses through proven and productive passages.” While not an extinction-level event, businesses have to adjust their strategy, abandoning any business-as-usual practices and recognizing the impact of technology on leadership, processes, and the overall customer experience.

“Operating within the confines of traditional paradigms without purpose or vision eventually challenges the direction, capacity, and agility for thriving in a digital economy,” Solis writes. 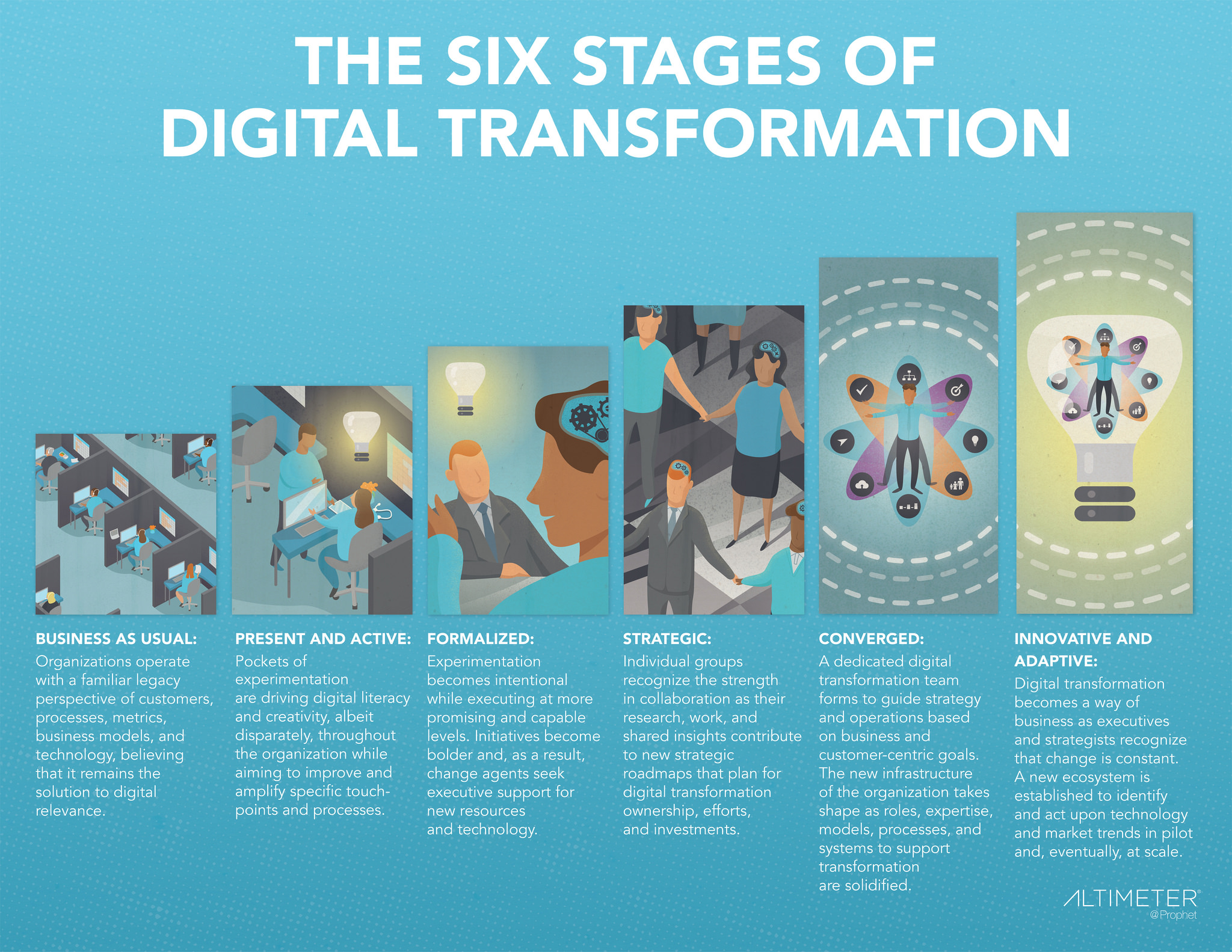 Solis said he has spoken to companies like Dell, Discover, GM, Harvard, Levo, Nestle, Novartis, Sephora, Target, and others to understand how they’re managing the transformation of business. From this came a framework that, if applied properly, could give so called “mature” organizations a renewed life. For example, GM is seeing the automobile industry hit by the rise of Uber. In response, the automaker formed a partnership with Lyft and is exploring a self-driving car to compete against Tesla.

Elsewhere, Amazon is shaking up how companies sell online, and 3D printing startups are affecting the manufacturing process. Amid all of this disruption, all is not lost. Solis identifies six phases a company has to go through in order to remain relevant:

The first stage is where businesses have to come to grips with this new dynamic: that what they’re doing isn’t cutting it anymore and they have to move beyond their comfort zone. It’s a phase where they gripe about how companies like Twilio, Facebook, Airbnb, Stripe, and other disruptive services are winning more customers. As Solis describes it, “a lack of urgency exists and any need to change is largely rebuffed or dissuaded by leadership.”

True innovation and change begins to take place in the second stage, starting with internal advocates, employees who recognize new opportunities and battle for the right to lead experiments in their domains. These “change agents” operate under the “better to ask for forgiveness than for permission” mentality.

Things start to pick up in the third stage in a more formalized approach, where early adopters and change agents come together to break down silos and collaborate on “modernizing the customer experience.” Now there are teams dedicated to shifting the company’s thinking to move specific areas forward into the digital age.

Executives will begin to pay attention to this internal movement for change starting in the fourth stage, putting it on the company’s strategic roadmap. Investments in infrastructure and operations are dedicated to change, and new skillsets are brought in to advance innovation. The company begins to see the light as a whole and move as one — hopefully. The fifth stage is where new operating models and teams are created, and operations are streamlined. It’s here where digital transformation permeates throughout the entire organization, not just within specific departments. This business evolution has ingrained itself into the company’s core DNA, so everything that’s done now suits the customer behavior and expectations of today, not yesterday.

Finally, in the sixth stage, innovation becomes a practice instead of a phrase people utter. Solis explains that it’s now “part of how a business competes,” and activities will result in new programs being created, ranging from “test-and-learn pilots to the introduction of new roles/expertise to partnerships with an investments in startups.” It’s perhaps here where companies will look to establishing strategic centers and incubators like what Samsung, Ford, Orange, McDonald’s, and Target have in Silicon Valley. These all aim to supplement existing research and development efforts.

Solis cautions that his Six Stages of Digital Transformation isn’t something companies can quickly adopt. “It’s a journey,” he says. “It’s in the ongoing pursuit that makes change less about resolute stages and more about an evolving vision, purpose, and resolve to engage a connected generation of customers and employees.”

Rather than thinking about tactical changes your company can do to reach customers — be it launching a virtual reality app, pushing a bot onto Facebook Messenger, or even just having a Twitter account — management should look at the bigger picture and see how its entire set of operations and processes are affecting customers: Are you resonating with the 2016 customer or stuck in the 1990s?

“The Race Against Digital Darwinism” fits with the theme that Solis has been touting for a while, especially in his latest book, 2015’s X: The Experience When Business Meets Design, which calls the next area of disruption: customer experience.