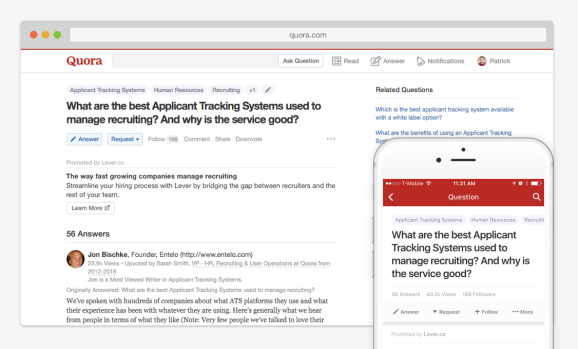 Quora has started looking at what ads would look like on the question-and-answer service. The company is running what it calls an “experimental pilot” (basically it’s in beta) where ads from Lever, Uber, Wealthfront, and Sunrun will appear on a small number of question pages.

To address worries about site experience, Quora plans to ensure that the content of each ad meets the quality of content of the question and accompanying answers. As for ethical concerns, each placement will be labeled with “promoted by” to avoid confusion between a legitimate answer versus a sponsored one.

There’s no indication about whether Quora is utilizing a third-party ad management service or has built its own, but that may not be something the company is worried about right now at the current volume. Rather, its main concern is making sure these ad placements won’t negatively affect Quora’s mission of “sharing and growing the world’s knowledge.”

Ads will be visible on both the web and on Quora’s mobile app.

This is the first time that Quora has begun monetizing its platform. Since its founding nearly seven years ago, the company has been making updates to ensure that it stuck with its mission. It has seen celebrities, politicians such as Paul Ryan and President Barack Obama, and other luminaries respond to questions on the site; rolled out features to facilitate knowledge sharing with its Writing Sessions, which are similar to Reddit’s Ask Me Anything; improved site safety to maintain civility by removing “bad actors”; and more.

What it has done seems to have worked — Quora now counts more than 100 million monthly unique visitors as of March, a 22 percent increase from January. This growth could be what has attracted advertisers to join this pilot program. For now, while the number of advertisers appears to be limited, the four that appear seem to be a good fit with Quora: If you’re talking about jobs, the economy, on-demand industry, or even the company, Uber is natural; Wealthfront will likely have its ads anyplace where questions involve money and financial issues; Sunrun is a home solar energy company, so any discussions about solar power, conservation, renewable energy, or climate change will likely display ads for this company; and lastly Lever also fits in with jobs, hiring, business management, and other employment questions.

If you’re interested in advertising on Quora, the company says you can reach out and they’ll notify you when ads become more broadly available.